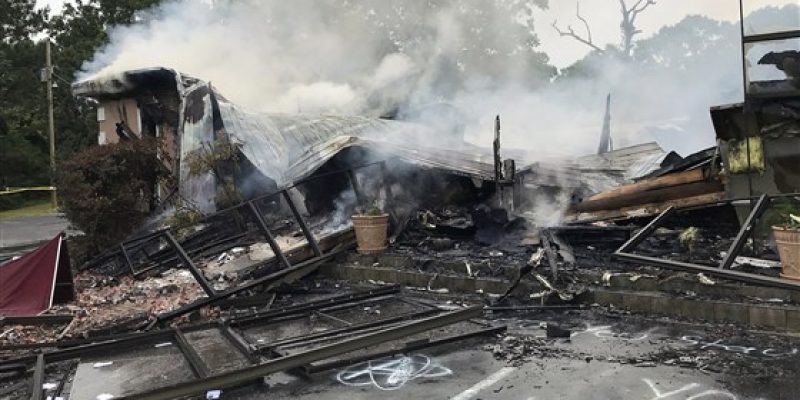 It is doubtful that President Trump’s announcement that new Centers for Disease Control guidance will consider houses of worship “essential” is a direct response to a terrible Mississippi church burning this week, but his timing couldn’t have been better.

“The governors need to do the right thing and allow these very important essential places of faith to open right now–for this weekend,” Trump said.

Earlier this week, a Pentecostal church in Mississippi was destroyed by fire, mere weeks after its pastor filed a lawsuit challenging the city of Holly Springs’ mandates concerning gathering restrictions. Arson is believed to be the culprit, as when Marshall County investigators arrived on the scene, they discovered graffiti on the concrete of the parking lot that read: “Bet you stay home now you hypokrites.”

One cannot help but think of the ignorance and sheer stupidity of the type of person who would do this. The misspelling of the word “hypocrite” doesn’t help mitigate that judgment.

Pastor Jerry Waldrop, who had alleged that police officers had disrupted a church bible study and Easter service in April, was dumbfounded.

“We’ve kind of racked our brains and we have no idea,” Waldrop said. “No enemies that we know of. We don’t know anyone that we even think could be capable of doing something like this.”

Holly Springs City Attorney Shirley Byers had said that nearly forty people inside the church building were not practicing social distancing on Easter Sunday, April 10, when a violation citation was issued.

On the flip side, the church’s lawsuit that followed stated that churchgoers did in fact practice social distancing indoors, and only held those indoor services when bad weather forced them there.

It is unclear under what authority Trump would override governor mandates for their own states. But the President took issue, and rightly so, with certain businesses being allowed to open, while churches are not. In April, Attorney General William Barr warned that COVID-19 restrictions by state and local government should be applied evenly, and not discriminate against religious organizations.

“Some governors have deemed that liquor stores and abortion clinics as essential,” Trump said, “but have left out churches and other houses of worship. It’s not right. So I’m correcting this injustice and calling houses of worship essential.”

The CDC released interim guidelines Friday for faith communities. They recognize that “millions of Americans embrace worship as an essential part of life,” but also warn that “gatherings present a risk for increasing the spread of COVID-19.”

Earlier this month, CDC released new guidelines that schools, businesses, and other organizations can use as states reopen in a phased process. The document, however, did not include guidance for churches and faith-based groups because the White House raised concerns about the recommended restrictions.

The White House’s Friday announcement followed President Trump’s growing communication from concerned faith leaders who are unable to conduct services at a time when their people need them most. In fact, on Thursday, Trump had a conference call with 1,600 of those faith leaders, and he left the meeting asserting that we’ve “got to get our churches open.”

Given the terrible event in Mississippi last week, it is clear that Americans need churches now more than this country has seen in a very long time. There’s no hypocrisy in that; it’s just the plain and simple truth.