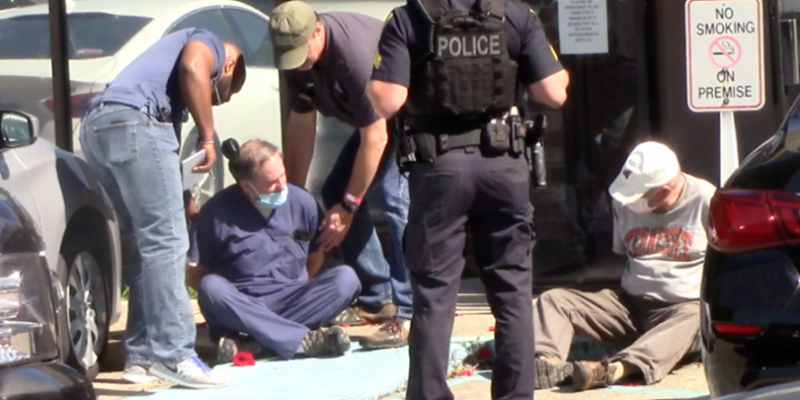 Two men walked into the Delta Clinic facility offering roses and hope to women seeking abortion, and they quickly discovered what the new normal squad wants for our American society.

Pro-life demonstrators, accompanied by Lauren Handy and Patrice Woodword of Red Rose Rescuers, arrived at the parking lot of the clinic, hoping to offer words of love and encouragement to the women lining up and waiting for the clinic to open. In all, 70 pro-lifers were gathered, holding signs and praying.

About two hours after this began, the clinic abortionist, Nsikan St Martin, arrived and was escorted into the facility by the security guard. Seeing that the door was clear, Will Goodman and Tony Puckett—both decked in full protective equipment—slipped into the building and walked into the waiting room, where four women were already inside.

While the two men were inside, other demonstrators were left in the parking lot to talk to the women waiting. These conversations produced several changed minds, as Life Site explains:

Rescuers Lauren Handy and Patrice Woodwood took the opportunity to enter the lot. They talked with the women who were still lined up waiting to get into the facility. Of the 15 women, seven accepted the roses offered to them. One woman actually asked Handy if she could have one of the roses. Lauren spoke to her for a few moments, told her that her own phone number was on the card attached to the rose, and encouraged the woman to call her. The woman left the line, walked back to her car and drove off.

Meanwhile back inside the facility, two abortion staff members approached Goodman and Puckett, one of them asking what they were doing there.

“We are offering roses to anyone in the clinic,” Goodman said, then offered roses to each of the four women. Of course, they were taken aback by the gesture, and one of them said, “Well, this is very nice of you.”

The other confrontational staff member read the card attached to the flowers, words that offered hope and encouragement, asking them to choose life. Phone numbers of local pregnancy help groups were included as an alternate option to abortion.

This infuriated the worker. She yanked the roses out of Goodman’s hands and demanded that the two men leave the building.

Amidst the ensuing altercation in which the workers got physical and the pro-lifers remained peaceful, a woman next door in the procedure room, the next step after the waiting room and within hearing distance, walked out of the building crying, without having obtained the abortion she planned.

Goodman offered his last rose salvaged from the drama to St Martin, but instead of taking it she and the security guard dragged him, along with Puckett, out of the facility, where ten Baton Rouge police cars had already arrived.

Goodman and Puckett were warned to exit the premises immediately or they would be arrested.

“We cannot do that, officer,” Goodman said. “We are here to defend the helpless unborn scheduled to be put to death.”

They were both handcuffed, taken to the police station, booked with a charge of “failure to disperse,” and then released. Their court hearing is scheduled for June 29.

As a an aside, something else the good doctor said to the two men inside the clinic should be reported.

She said that if Goodman paid her she “would gladly abort any of his babies,” and to Puckett, “I would have aborted you.”

In all, ten women left the scene during the time all this took place. Ten babies, at least temporarily, were saved.

It was a practical act of love that turned into an infringement of rights. It was a reminder of exactly how dark some places right around the corner are in this world.

It was also a reminder that we cannot simply praise groups based on abstract notions of what “they” as a group should represent, and villify others simply because they seem in opposition. We are finding that not all law enforcement members are honorable just because they wear a badge.

We are not defending criminals of course, but the truth is there are power-tripping, abusive cops out there who absolutely do abuse their position, and we need to remember that when—and if–this is all over.