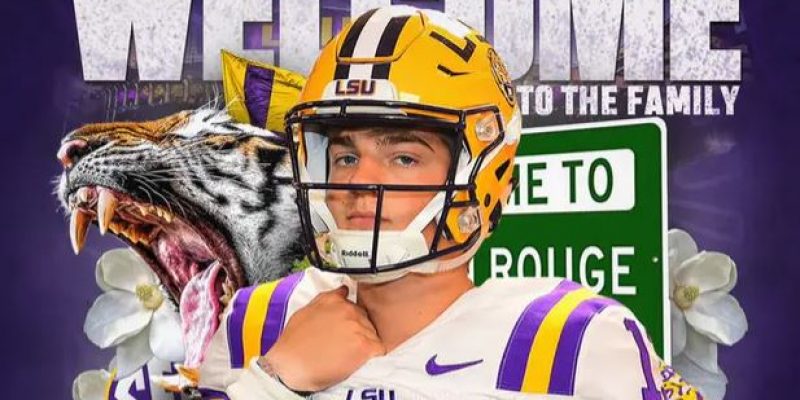 The young man has lived in more cities than many people will visit in a lifetime. It has been the effect of being the son of a former pro quarterback-turned football coach.

But now he is coming full circle, back to the state of Louisiana.

Garrett Nussmeier, a four-star prospect and the No. 7 rated pro-style quarterback according to 24/7 composite rankings, has announced his commitment to play for LSU.

“I’ve decided after much thought and prayers that I’ll be committing to Louisiana State University,” Nussmeier wrote in his weekly SI All American blog. “For me the decision was just a buildup of the things I know I can do in their offense.”

Nussmeier’s long, winding road started in Lake Charles, as he says, where his roots are, where he learned to hunt and fish. The journey hasn’t stopped while he has had to pick up and follow his father to new cities. Both sports and life lessons have been forged in Ottawa, Canada; Lansing, MI; St Louis, MO; Fresno, CA; Seattle, WA; Tuscaloosa, AL; Ann Arbor, MI; Gainesville, FL; and Dallas, TX.

From Dallas to Flower Mound and Marcus High School, where Nussmeier currently plays, is a thirty-minute drive.

If you watch this video, you may see shades of a certain Heisman-winning quarterback that recently donned the purple and gold. Nussmeier has superstar written all over him.

Nussmeier becomes the ninth commitment of a 2021 recruiting class that started slow, but has recently hit its stride in the last ten days for the Tigers. In addition to Nussmeier, LSU has landed commitments from receiver JoJo Earle, defensive end Landon Jackson and linebacker Zavier Carter—all four star recruits.

For Nussmeier, his plan was to take official visits in the summer and fall, and compete in various summer camps. With the onset of limitations brought on by COVID-19, however, much of the typical recruiting schedule continues to hang in the balance.

Now, with his decision made, the 6’2, 180-pound gun-slinging quarterback can focus on his senior season and the improvements he knows he has to make.

“I think the next step for me is to build that confidence and take the ball past the line of scrimmage and go get five or six,” Nussmeier told LSUCountry in March. “So getting better at running the football and getting bigger and stronger are two important things to me as of now.”

One bonus is that at LSU, Nussmeier will be learning under new passing game coordinator Scott Linehan, who replaced Joe Brady in the off-season. The two families have a history, as Garrett’s father Doug played for Linehan at the University of Idaho, and then later coached alongside Linehan for the Dallas Cowboys.

Of course, one of the biggest factors in his decision was his relationship with LSU’s top man, Ed Orgeron.

“Me and Coach O have constant communication whether it’s through text or me calling him,” Nussmeier wrote. “We talk at least twice a week, typically on the phone and sometimes FaceTimeing. We’ve had a really great relationship through this whole thing.”

Through it all–through all the different stops, people met, and friends made, he never lost sight of his home state and its flagship university. It is a testament to the power LSU football has, that a kid who grew up all over the country always knew where home was.

“To be a part of that, especially with the chance to be a quarterback for them, was just an opportunity that was hard to pass up on. Especially after them winning a national championship and with the things they did with Joe Burrow to get a first overall pick. It all stacked onto each other and there was really nothing that made sense in why I shouldn’t go to LSU.”

We couldn’t have said it any better ourselves, Garrett. Welcome aboard, Tiger.