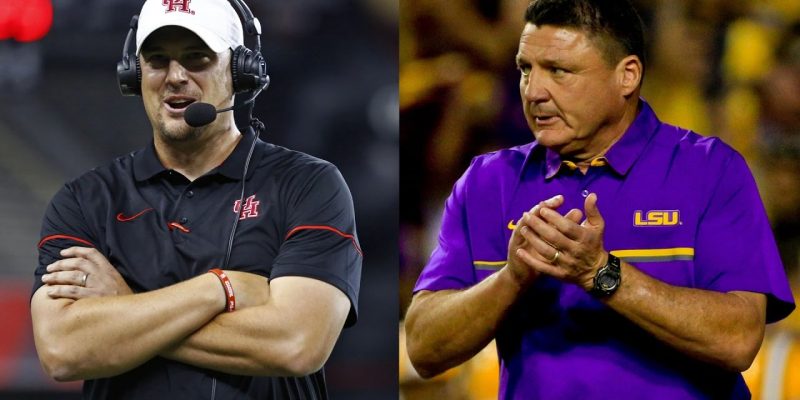 Tom Herman is the head coach of the Texas Longhorns. In the fall he will enter his fourth season at the helm, and his seat already couldn’t be any hotter.

Hotter than an Austin summer afternoon.

But more on that shortly.

Back on Thanksgiving night in 2016, ESPN’s news crawl reported that LSU and 41-year-old maestro Tom Herman was going to be the next Tiger head coach.

He would succeed interim coach Ed Orgeron, who in Tiger Nation’s mind was always just a stop-gap between Les Miles and whoever the real coach would eventually be.

He’d always been that type of guy, a bridesmaid, but never a bride.

It seemed, for a long time, that the new real head coach might be then-Florida State general Jimbo Fisher.

Tom Herman, LSU head football coach. Wow, was the general sentiment. A lot of people were leaping with excitement. He was the can’t-miss candidate who’d proven his worth as offensive coordinator on a national championship winning Ohio State team and as a head coach who turned lowly Houston into a nationally ranked power.

And now he’s our guy. He’s our coach. What fantastic things will he be able to do with the dynamite offensive talent Louisiana produces?

He was the anti-Les Miles everyone coveted.

He was the young up-and-comer with an offensive mind that simply couldn’t miss.

But there was so much more going on behind the scenes.

It turns out that perhaps Fisher, by that point anyway, was just a ruse to cover LSU administration’s behind-the-scenes negotiations with Herman’s camp.

LSU and Herman were having serious talks in the week leading up to the Thanksgiving night game between the Tigers and Texas A&M, during which the ESPN crawl appeared. Herman had reportedly shot down any suggestions that he wanted to coach at Texas.

All signs pointed to Herman to Baton Rouge.

The anticipation for the fall of 2017 was palpable already.

Then at about 5 am on Saturday morning, either Herman or his agent told LSU leaders that he would begin discussions with Texas about its head coaching job.

It was at that point that then-LSU athletic director Joe Alleva was done.

Fed up with the gamesmanship of grown men playing each other like a game of poker, and perhaps also with the residual frustration of the previous year’s coaching circus that ended with Miles keeping his job, Alleva severed contact with Herman and his agent. He would call Texas “wealthy and desperate,” refusing to continue into any potential bidding war for an unproven coach who was simply using LSU to leverage his preferred job with the Longhorns.

“That was all orchestrated by someone, and you can figure that out,” Alleva said on that Saturday, a clear shot at Herman and his agent Trace Armstrong.

Herman’s camp had used the LSU faux-deal to sway the Texas brass to move on Herman. Texas is where Herman wanted to be all along.

And of the 10-12 vetted candidates who originated in Alleva’s coaching search, only Orgeron was left. Fisher could have been an option Alleva circled back to, but his asking price was too high, especially since Miles’ buyout was so high as well.

Alleva called Orgeron, and we all know who got the job from there.

It wasn’t the splash hire many Tiger fans wanted.

They compared Orgeron to Herman, and thought how raw was LSU’s end of the deal.

Many also associated the hire to that of Mike Archer in the late 1980s. Many predicted the final collapse of the LSU football program begun by the decline of Miles and a 2011 championship that never happened as it should have.

Players in 1986 had wanted Mike Archer as head coach just as much as 2016 players wanted Coach O.

The irony here is that a Herman hire would have resembled the Archer hire just as much–but for another reason. Here is a line from the South Florida Sun Sentinel in November 1988 leading up to the Saturday night showdown between No. 3 Miami and No. 11 LSU:

The downpour in Death Valley that night was a sign of doomsday to come for Mike Archer.

He was the exact type of “rising star” Tiger fans wanted in 2016. It was the flashy hire that would’ve had ESPN analysts gushing over LSU that entire off-season.

And it very well might have all been fool’s gold.

Fast-forward over four years to 2020, and Fansided’s Andrew Miller is writing the article titled “This is Tom Herman’s last chance with the Longhorns.”

Texas has won three bowl games, including the 2019 Sugar, but has compiled a mediocre 25-15 record since Herman took over in 2017.

Meanwhile Orgeron is 34-7 with Fiesta Bowl, Peach Bowl, and National Championship victories. That doesn’t include his 6-2 stint as interim coach at the end of 2016.

Overall Orgeron is the fastest to 40 wins in LSU history.

And Herman is still trying to figure out the Big 12.

Texas will return a ton of talent and experience from last year’s team, so youth and injuries will no longer be reasons for the Longhorns’ continued mediocrity. Most visibly, Herman has reset his coaching staff, a move about which athletic director Chris del Conte had a very pointed comment.

“With what he did [changes on the coaching staff], I’m really proud of him because he took a step back, looked within, looked at what he needed to do to change and what he wanted to do with his staff and made the changes. Tom made some really difficult choices in letting go a lot of people that were dear friends of his and were with him for a long time.

“He knows that you get a chance to do that one time.”

And with that one final line, the message is clear: Tom Herman had better do better than he has been, or he may very well be kicked out of Austin just as his predecessor Charlie Strong was.

Just as Mike Archer was after four years at LSU.

He may very well be looking back one day, as Orgeron piles up championship after championship, and realize what a devastating career card he once played, what a wrong road choice he once made.