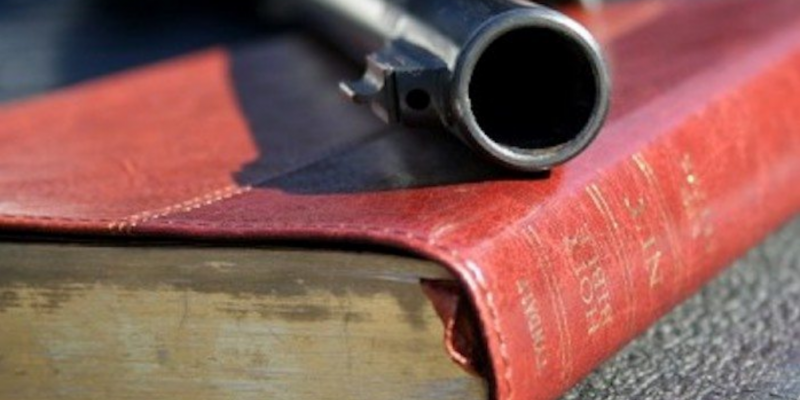 Following every public school shooting in America, Christians have held vigils and prayed with the families and friends of victims and survivors. Faith is not absent during tragedy. In fact, people to turn to God in prayer, ask questions, and express anger, gratitude or grief.

Many argue that school shootings would be minimized if schools hired security guards and staff were trained and armed, and there is a Biblical argument to support this.

The right to life—and one’s right to protect it—is clearly explained throughout the Old and New Testaments. Murder is prohibited in the Sixth Commandment– because all of life is to be protected.

After the Exodus from Egypt (which Jews celebrate during Passover), God instructed Moses to create laws and establish a government to restrain evil and promote good. The Ten Commandments were the initial guide for right conduct, but numerous civil and criminal laws were enacted and enforced through the judicial system. These laws became used as some of the basis for Western law, including laws governing self-defense, personal injury, property rights, and much more.

Throughout the Bible using a weapon is mentioned in concert with self-defense—inside and outside the home. Jesus affirmed the Old Testament laws, as was recorded by his disciple, Luke: “When a strong man, fully armed, guards his own house, his possessions, are undisturbed.” (Luke 11:21).

Centuries before Jesus, Mosaic Law stipulated that homeowners are not guilty of murder if they kill a thief who is breaking and entering into their home or stealing property. (Ex. 22:2)

And, even while working, carrying a weapon was permitted. Nehemiah, a servant chosen to rebuild the wall of Jerusalem, was protected and armed by the Persian King Cyrus. Cyrus made sure that he and his men were armed. Every man “wore his sword girded at his side” (Neh. 4:18)–while they were building a wall around the city.

Many refer to Exodus 22:2 as the basis for U.S. law known as the Castle Doctrine. In 23 states, this doctrine includes “Stand Your Ground Laws,” and in some states, both apply to a person’s home office, vehicle, or yard/land/property surrounding the home.

The framers of the U.S. Constitution understood that self-defense is a God-given right, which to them meant it is an inalienable right.

One of the original members of the U.S. Supreme Court, James Wilson, a signer of the Declaration of Independence, argued that a man not defending his home was negligent:

Homicide is [required] when it is necessary for the defense of one’s person or house … Every man’s house is deemed, by the law, to be his castle; and the law, while it invests him with this power; [places] on him the duty of the commanding officer [of his house].

Every man’s house is his castle … and if anyone be robbed in it, it shall be esteemed his own default and negligence.

The founders established that one of the purposes of U.S. law was to protect the individual’s inalienable rights, which they outlined in the Bill of Rights and in the Declaration of Independence.

We hold these truths to be self-evident: That all men are created equal; that they are endowed by their Creator with certain unalienable rights; that among these are life, liberty, and the pursuit of happiness; that, to secure these rights, governments are instituted among men.

The founders emphasized the need to train their children about responsible gun ownership. John Quincy Adams wrote specific instructions to his brother, Thomas, for educating and training his boys (George, age 9; John, age 7; and Charles, age 3):

One of the things which I wish to have them taught – and which no man can teach better than you – is the use and management of firearms. This must undoubtedly be done with great caution, but it is customary among us – particularly when children are under the direction of ladies – to withhold it too much and too long from boys. The accidents which happen among children arise more frequently from their ignorance than from their misuse of weapons which they know to be dangerous.

In order to assure a certain progress in this reading, consider what hours you have free from the school and the exercises of the school. Give about two of them, every day, to exercise; for health must not be sacrificed to learning. A strong body makes the mind strong. As to the species of exercise, I advise the gun. While this gives a moderate exercise to the body, it gives boldness, enterprise, and independence to the mind. Games played with the ball, and others of that nature, are too violent for the body and stamp no character on the mind. Let your gun therefore be the constant companion of your walks.

According to the Bible, men are required to protect themselves, their families, their homes, their possessions, and if they choose not to– are negligent. The “right to bear arms” is not only a constitutionally-protected right, but also a biblical command.

Christians are instructed not to commit murder, and only to kill if in the act of self-defense. The “Right to Bear Arms” is a commitment and obedience to protecting one’s right to life– an inalienable right– that God requires be protected from harm.