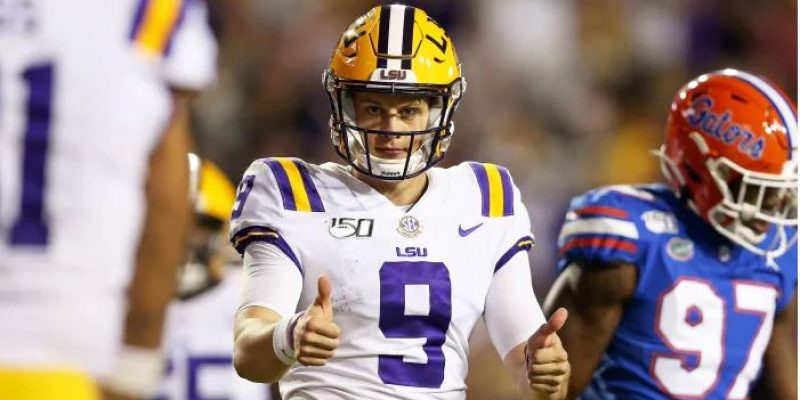 The disaster occurred on January 9, 2012, because that’s when bowl games are played–at the turn of the calendar year. But the memory of that dreadful night will always be about the year, the season, that could have been.

The 2019 national title game is in the Big Easy again. And the Tigers are hoping to reverse the curse from 2011.

Perhaps an intriguing coincidence might give glimpse to the destiny of this Tiger team: the quarterback in that 2011-12 championship also wore No. 9.

For eight long years, LSU Tiger fans have had to wonder if the January disaster in New Orleans would ever go away. They say time heals all wounds, but really, it is quite possible that anytime you go through the Rolodex of Tiger football memories, you smile at 2003, at 2007, then grimace at 2011.

You wince at Jordan Jefferson (that No. 9) but smile at his brother, this year’s star wide receiver Justin.

How perfect a trifecta that could have been, you might think. Every four years for nine seasons, a journey ending with a title in the Superdome.

Of course, 21-0 Alabama needs no explanation. What one might not realize, though, is how likely it was that that championship set Bama and LSU on separate paths this decade.

No longer does LSU have to live with the stigma of having to say the last time it beat Bama was 9-6 in November 2011. Eight years of futility ended in Tuscaloosa this season with a 46-41 Tiger victory.

Since that win, since the following week when the defense could do nothing right in the second half at Ole Miss and the Tigers still won by 21, since quarterback Joe Burrow continued to construct his landslide Heisman victory, it has almost seemed destined that this season could end only with a national championship coming back to Baton Rouge.

Of course, it is relatively close to what 2011 felt like when the Tigers escaped Tuscaloosa with a regular season victory in the “Game of the Century.” There was a feeling of destiny attached to that season as well.

But you may remember having a bad feeling when it was Alabama’s name called for the No. 2 slot opposite LSU in the BCS National Championship Game.

You’d never been a bigger Oklahoma State fan before that day.

And you may remember knowing that it was little Nicky and the Tide that would be seeking redemption.

You couldn’t enjoy the weeks leading up to the big clash. All you could do was consider the idea that LSU, at 13-0 and SEC Champions, might very well lose the national title to a team it beat on the road in the regular season, a team that of course didn’t even win its own conference division.

A subtle fear was more present than the giddy anticipation a fan should feel.

Maybe the players felt it too. Maybe that’s why LSU was so utterly humiliated on January 9, 2012.

But this year, of course, is different. Certainly, the old fear was there for Tiger fans when the powers-that-be set up a repeat of 2011 when they dropped Bama to only No. 5 after its home loss to LSU this season. The Tide was one win against Auburn away from the playoffs, and a likely rematch with the Tigers. Everyone was an Auburn fan that Saturday afternoon when the War Eagles pulled out a late win, effectively ending the dreaded possibility of LSU having to beat Alabama twice–again.

Thank you, Auburn. Thank you for allowing Tiger Nation to simply enjoy the awards shows last week and Burrow’s magical Heisman ceremony. Thank you to a team we typically love to hate just as much as we do Alabama.

Yes, it has been enjoyable as a fan to relax and simply look forward to LSU-Oklahoma next Saturday in the Peach Bowl. All the other demons have been exorcised from that icky 2011 finish; it is not unreasonable to believe that two more Tiger victories–the second of which would be in New Orleans of all places–might very well achieve some measure of redemption and reverse the curse voodooed on LSU that cold January night eight years ago.