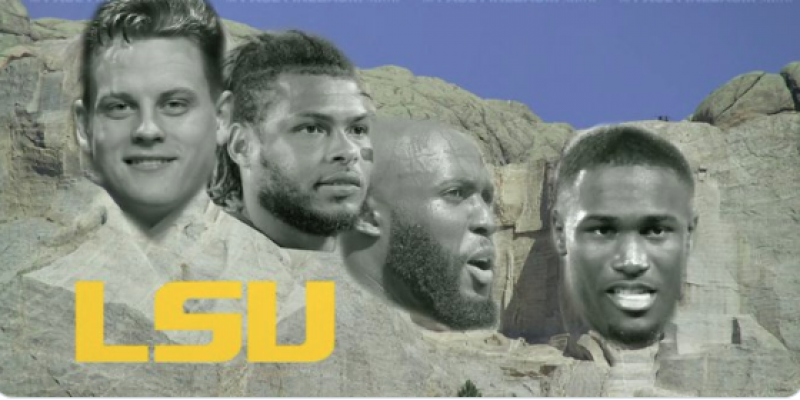 A quarterback, a defensive back/punt returner, a running back, and a middle linebacker.

It is only because we are still a long seven days away from playoff semifinal Saturday that something like this is fun to examine. But while we are here and waiting…

Joe Burrow is the obvious No. 1. He will finish his career as the most decorated player in school history, having won the most revered individual award in sports in the Heisman.

Probably as obvious is the No. 2 player, Tyrann Mathieu. The man behind the “Honey Badger” moniker set an SEC record with eleven forced fumbles in his career from 2010-11. In his sophomore season, he was named a consensus All-American, won the Chuck Bednarik Award as the nation’s best defensive player, and was a finalist for the Heisman Trophy, a rarity for non-offensive players.

In fact, Mathieu and Burrow’s paths crossed in the online world with this epic video put out by LSU days before the Heisman Trophy presentation.

Burrow and Badger are no-brainers. The questions come in when it comes to Fournette and White.

Fournette was one of the most highly touted incoming freshmen in LSU history in 2014. He put out a solid freshman season (187 rushes, 1,034 yards), but broke loose with a bang his sophomore year. For the first half of the schedule leading up to the Alabama game, analysts were praising him as they were praising Burrow this past season, practically handing him the Heisman weeks before awards night. His monster game against Auburn early that season put him on the All-American map.

Against Alabama, that Heisman campaign came to a screeching halt.

Still, Fournette would finish the season a unanimous All-American selection after rushing for 1,953 yards on 300 carries (6.5 avg), catching 19 passes for 253 yards, and piling up 23 touchdowns. His Heisman Trophy Presentation absence in New York will remain one of the most perplexing snubs of all time. The woeful Alabama game exacted a far greater punishment on the national perception of Fournette than it should have.

Does Fournette deserve a spot on the LSU Mount Rushmore, as one of the four greats? Probably.

As for Devin White, his career was less puzzling as Fournette’s, in relation to the accolades he deserved and subsequently received. He walked onto campus in 2016 wanting to play running back, but then-coach Les Miles and the staff placed him at linebacker, which would eventually translate into White earning consensus All-American honors and winning the Butkus Award as the nation’s top linebacker in 2018. He also earned high praise from Tiger fans and teammates for his leadership, especially when he decided to play in the end-of-season Fiesta Bowl instead of forgoing the game to prepare for the NFL draft.

Perhaps the thing Tiger fans remember the most about White is his ejection from the Mississippi State game. Called for a targeting call that was as bogus as they come, White was consequently suspended for the first half of the next game–which was against the Tigers’ biggest nemesis–Alabama. Everyone with eyes to see knows that call was made up by the officials and everyone with even low-level critical thinking skills knows why they made it–and upheld it, even after review.

Does White deserve a spot on the LSU Mount Rushmore, as one of the four greats? Hard to say no, but there is another that probably deserves it more….

Cornerback Patrick Peterson was a starter from day one as a freshman in 2008. He does qualify for consideration for the LSU Mount Rushmore because his third and final year fell in 2010. Peterson, who was also a punt returner, was as dominant a defensive player as the Tigers have ever had. His unanimous All-American selection in 2010 was only the second of its kind for LSU since 1962 (Glenn Dorsey, 2007).

Once again, Alabama is the issue when it comes to remembering perhaps Peterson’s most famous play–his clear interception on the sideline against the Tide that could have shifted the outcome of that 2009 game.

Yes, White was a standout player for the Tigers, but in my opinion, Peterson probably deserves the nod. But when you’re trying to narrow down a list as extensive as there is for the number of LSU greats there have been over the last decade, choosing between White and Peterson is not easy by any means. It’s closer than any of the calls that went against LSU in 2018 and 2009, for sure.

What is easy, though, is being glad that there is no way the Alabama curse can bite LSU in this year’s playoffs. Now that is truly one of the greats. Geaux Tigers.

Interested in more news from Louisiana? We've got you covered! See More Louisiana News
Previous Article REMEMBERING 2007: Part IV, One Remarkable Ending
Next Article REVERSE THE CURSE: A Title Could Heal the 2011 Disaster in New Orleans