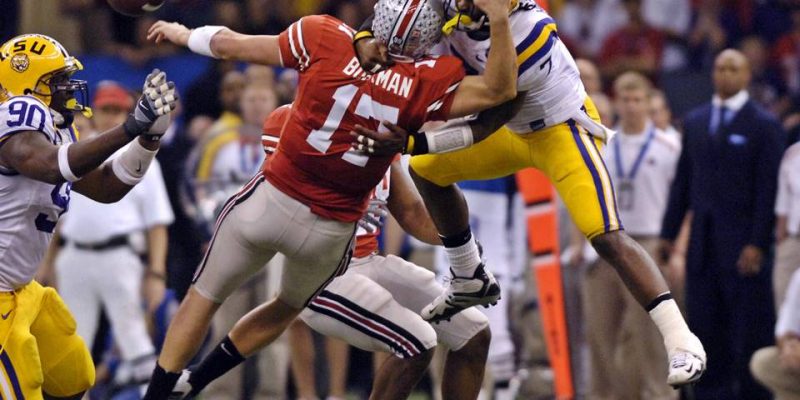 One Remarkable Ending to an Unbelievable (literally) College Football Season

The LSU Tiger football team was ranked No. 7 in the BCS rankings after the home loss to Arkansas to end the 2007 regular season. They were left for dead. They’d blown their shot at a national championship.

At No. 7, they were even ranked behind Virginia Tech, whom they’d drubbed 48-7 early in the season. Not enough of the voters bothered to notice much. No one cares where you’re ranked after No. 1 and No. 2. It doesn’t matter what bowl you’re destined for.

One of the greatest recruiting classes in LSU history, Nick Saban’s last in 2004, would play their last game without an opportunity to win a national championship, which was expected after the 2003 title and the enormous momentum it created on the recruiting trail.

At least there was still the SEC Championship Game to be played. At least they still had the opportunity to leave campus with some measure of hardware.

You probably remember that particular Saturday starting off with controversy. You may remember head coach Les Miles, decked out in a full navy blue suit and tie, calling an unprecedented press conference that morning, responding in vitriol to an ESPN report that he was leaving LSU to coach at Michigan.

If you don’t remember what he said then you might not be an LSU fan after all. It might not have been “a great day” for the media, but it sure would end up being one for Miles’ “damn strong football team.”

And you may remember wanting to forget everything that followed in that dreadful 2008 season.

But the year of the LSU pick-six was still thankfully a year away. What happened on the college football landscape that Saturday outside of the Georgia Dome in Atlanta was the real news. You may have forgotten that it was Pittsburgh who went into Morgantown and, in a remarkable ending to one special day, upset second-ranked West Virginia to throw the whole top-10 and national championship picture into unprecedented chaos.

You may remember watching that game and doing the calculations. Surely Georgia couldn’t make it. They didn’t even win the SEC East (we just beat Tennessee from that division). Surely Virginia Tech couldn’t make it (we abused them by 41 this season).

Then of course West Virginia is in a weaker conference and would surely drop….

Of course No. 1 Missouri had lost to No. 9 Oklahoma in the Big 12 Championship earlier that day. You would have forgotten that by Saturday night had none of these other miracles started to materialize.

You may have forgotten that while you were figuring all of this, the officials calling the Pitt-West Virginia game seemed to be trying their hardest to get the Mountaineers into the title game. You may still be looking for those holding calls on Pitt.

And asking forgiveness for the words you were spewing at the television screen.

Then you may take a timeout to venture even further back in your mind, and that this whole 2007 season, this “Year of the Upset,” began with a bang when Appalachian State from the FCS shocked No. 5 Michigan in the Big House, the first time an FCS opponent had ever beaten a top-five FBS team.

What Made 2007 the Wacky Season it Was

The 2007 season was marked by the unprecedented frequency with which ranked teams fell to lower-ranked or unranked opponents. An unranked or lower-ranked opponent defeated a higher-ranked team a whopping 59 times over the course of the regular season. Teams ranked in the top five of the AP Poll were defeated by unranked opponents 13 times during the regular season, setting a new record in the history of the poll when at least 20 teams were ranked. The only other season to see more such upsets was 1967, which was one of seven seasons when the AP Poll was comprised of only ten teams.

The 2007 season is also known for the “Curse of the No. 2”, where the team ranked  No. 2 by the AP Poll was defeated seven times in the final nine weeks of the regular season.

When the Kansas Jayhawks end up being the only one-loss team among BCS automatic-qualifying teams after bowl season ended, you know there was some serious craziness happening on the gridiron that season.

LSU Emerges from the Chaos

Perhaps even now, twelve years later and on the cusp of the College Football Playoffs, you are still reaping the glory from the results of that fateful last Saturday in 2007. Because when all was said and done, it was LSU maneuvering through lesser deserving teams, from No. 7 to No. 2, and into the national championship game against the latest top-ranked team in the nation–one-loss Ohio State.

It’s all history, of course. Every Tiger fan knows that LSU won. That it fell behind 10-0 and scored 31 unanswered points to throttle the Buckeyes. That Early Doucet was flexing his muscles and Ali Highsmith was crushing the quarterback and offensive coordinator Gary Crowton was emptying the kitchen sink from up there in the play-callers’ booth. That Flynn, after waiting his turn behind top NFL draft pick JaMarcus Russell for three long years, was, in the end, the field general who would lead the LSU Fighting Tigers to their third national championship.

Flynn was named the MVP and would go on to have a productive career in the NFL.

Everyone knows this and yet you may not believe that already a dozen years have passed.

Alas, it is almost time to cheer on this new 2019 version of the Tigers against Oklahoma, Clemson, and Ohio State in the playoffs.

Yes, another opportunity at making history is upon all of us. The faces of the team are different. The approach to game strategy is different. Even the coach is different. And to be wholly honest, that 2007 team wasn’t nearly as good as this year’s Tiger team is.

Yet still, as we wait with bated breath for next Saturday, it’s always fun to remember one remarkable ending to a college football season.