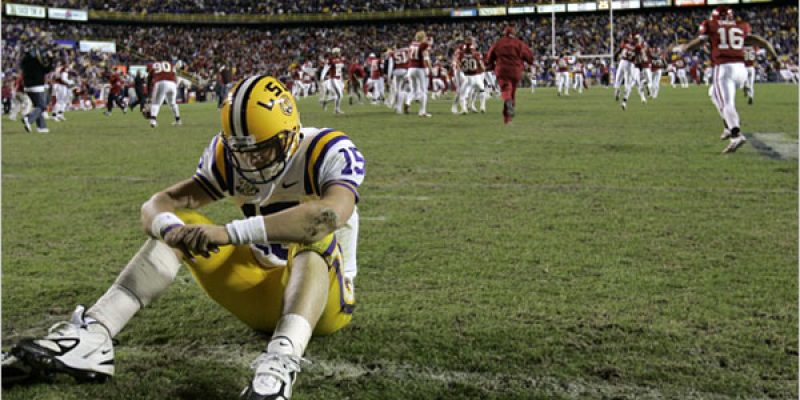 The Florida game was the climax of the 2007 season.

Unlike 2003, when the climax came at the end of the season and LSU’s title-winning victories over Georgia and Oklahoma, the 2007 Tigers were never the same dominant team after winning arguably the greatest college football game of the decade over Florida.

It’s not like “everything was downhill from there,” as the adage goes, but the 43-37 triple-overtime loss at Kentucky the week after beating the Gators was an indication of struggles to come.

It also knocked LSU out of its brief stay at the top of the rankings.

You may remember Andre Woodson and the Wildcats carving up the Tiger defense for 27 points in regulation and erasing a 13-point third quarter deficit, and wondering what in the world happened to that defense that was playing Mississippi St. and Virginia Tech earlier in the year. The noticeable regression of the Tiger D for the rest of the season was as perplexing as it had been for Kentucky fans the last time LSU left town with a certain Blue Grass Miracle win in 2002.

You may still be feeling running back Charles Scott’s tears.

A week later the now-fifth-ranked Tigers were down 17-7 at halftime to No. 17 Auburn, but eventually came back to win on a 22-yard touchdown pass from Matt Flynn to Demetrius Byrd, leaving just one second on the clock.

The drama was palpable. Thrilling and clutch for sure, but what you may not remember is how the national media blasted Miles for forgoing a potential game-tying 39-yard field goal to instead gamble on the victory.

But the truth is this: Under NCAA rules, the clock keeper allows the clock to run when a reception is made in the endzone until the official on the field gives the touchdown signal. Had Byrd dropped the pass, the clock keeper would have stopped the clock immediately upon the ball hitting the ground, which would have left the Tigers with about four seconds on the clock and a chance to run another play, which presumably would have been a field goal attempt.

Yes, a little something the “experts” apparently didn’t know.

You may also remember senior wide receiver Early Doucet returning from a five-game absence due to an injury and making an immediate impact. Or the chop block on All-American defensive tackle Glenn Dorsey and how he was never the same again that season.

And then there was Alabama.

Dubbed the “Saban Bowl” because so many of the now-Tide coach’s former recruits still played for LSU, the contest turned out to be one of the classic battles of 2007 with as many twists and turns as the Florida game. You may remember that this close affair almost wasn’t, as LSU jumped out to a commanding 17-3 advantage.

Bryant-Denny Stadium was rocking. The drama just wouldn’t let up.

But then you might remember Flynn’s clutch 61-yard strike to Byrd for a touchdown to tie the game.

But then again, you may remember the Tiger punt team seeming to part the Crimson Sea for returner Javier Arenas to take it 61 yards to the house and put the Tide up by a touchdown again.

Not 4th and 1. Miles couldn’t call a run up the middle with Jacob Hester on this one.

Instead, you may recall the dramatic 32-yard game-tying touchdown from Flynn to Doucet. You may still be wondering what Early had on his fingers to catch that low, streaking bullet.

The Jacob Hester leap and twist in the air for the game-winning score.

It was over. Finally.

No. 3 LSU 41. No. 17 Alabama 34. You may remember wanting to vomit at just the thought of it being Saban to be the one to put the final nail in the Tigers’ national title hopes.

What you may not have known is that Miles was presented with the game ball by his players after this first game against Saban , much like Cholly Mac after his victory over former LSU coach Paul Dietzel in 1966.

You likely don’t remember LSU drubbing Louisiana Tech 58-10. But you may recall being frustrated yet again with a Tiger defense that simply couldn’t seem to stop a lowly Ole Miss team despite a 41-24 victory.

You may remember being worried about a post-Thanksgiving day hangover against star running backs Darren McFadden, Felix Jones, and Arkansas six days later. You may remember that LSU was again ranked No. 1 by virtue of the Tech victory, but that somehow the Razorbacks were going to push that top ranking for everything it was worth.

You may remember being right. Triple-overtime. Arkansas 50. LSU 48.

You may remember thinking how much more you hated Houston Nutt than Nick Saban.

It was the end of the national championship run. The image of a despondent Matt Flynn sitting on the turf with his head down while Arkansas players celebrated wildly behind him may still be etched in the memories of Tiger fans everywhere.

Despite what shockers were still to materialize on the landscape of college football. Despite what miracles were to come for the Tigers that would make it possible yet again to rise to No. 1….