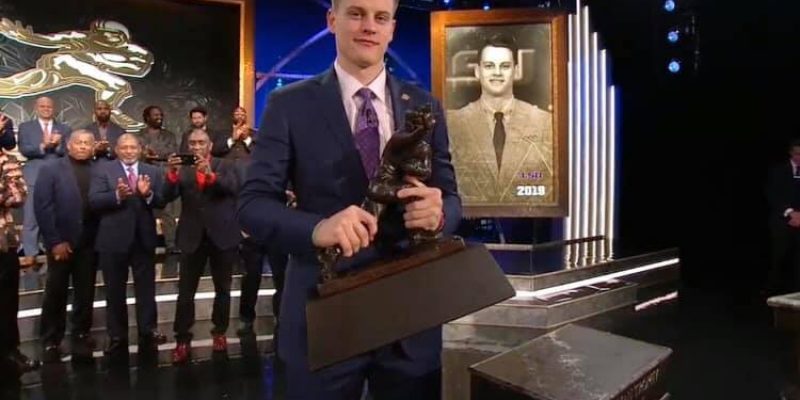 “If you love New Orleans, she’ll love you back.”

Like most Drew Brees quotes, he probably never intends his words to adorn t-shirts and decorative kitchen towels when he first utters them. But the most famous patron Saint of New Orleans is also looked at as a prophet, so it’s no surprise that his quotes often become folk art.  But little did #9 know that one of his biggest fans was also a #9 quarterback playing 70 miles up I-10 at LSU. Joe Burrow, a native of Athens, Ohio, has given his heart and soul to Louisiana, and in return, Louisiana has officially made him family. There was nigh a dry eye across America as viewers watched an emotional Burrow tell LSU head coach Ed Orgeron how much he meant to Joe and his family prior to hoisting the second Heisman Trophy awarded to an LSU player in school history.

Following the graduation of former LSU quarterback Matt Flynn, who in 2007 led the Tigers to a second National Championship in 4 years, the most popular water cooler talk for LSU fans was about modernizing the offense and developing a gunslinger-style quarterback that could compete in the new spread-style offense that was taking over the SEC. Even though a dual quarterback system in 2011 led to undefeated regular season and an SEC title, the sting of an embarrassing title game shutout loss to Nick Saban’s Crimson Tide in front of a home crowd in the Superdome proved to be unforgivable for most of the LSU die-hards. They would have to endure almost five more years of “Less Smiles” as the quirky, stubborn Les Miles failed to recruit and develop a pocket quarterback and made the LSU offense almost unwatchable.

That all came to a head just four games into the 2016 season after a loss on the road to Auburn, bringing LSU’s record to 2-2 after being ranked #5 in the preseason. The following morning, a call was placed from a private jet sitting on the runway in Auburn, a prominent booster had conferenced in several other boosters and asked to be connected to then Athletic Director Joe Alleva.  Alleva was assured by this power group that if Les Miles was not fired on Sunday, that Alleva himself shouldn’t bother showing up for work on Monday morning.  Les Miles was subsequently dismissed that afternoon and Ed Orgeron was promoted to Interim Head Coach.

Ed Orgeron was given the permanent head coaching gig and Danny Etling had transferred from Purdue (Alma Mater of Drew Brees) to LSU, securing the starting quarterback position for the upcoming season.  LSU had also signed high school star Myles Brennan, who dominated prep football in Mississippi in his hometown of Bay St. Louis (practically a suburb of New Orleans).  On May 20, 2018, an Ohio State backup quarterback named Joe Burrow signed with LSU, coincidentally on the same day that LSU’s lone Heisman winner Billy Cannon had passed away.  It would be almost 19 months later before we learned why that was a coincidence.

While Brennan had shown flashes of promise in his limited playing time, there was a concern that he was not quite ready for prime time. Orgeron announced that there would be a good old-fashioned quarterback competition after the 2018 spring practice, and ultimately Burrow was named the starter prior to LSU’s season opener against Miami in “Jerry World.”  It was obvious that Joe Burrow had the physical gifts that fans wanted in a signal caller, and Burrow led the Tigers to a respectable 10-win season (11 if you count the win against Texas A&M that was stolen from the Tigers.)  It seemed like Orgeron’s gumbo just needed that one special ingredient to win the blue ribbon, and that spice came in the form of passing coordinator Joe Brady.

It was apparent from the start of the 2019 season that Brady had brought the high flying, high scoring offensive scheme to Baton Rouge that he had previously managed for the New Orleans Saints.  Joe Burrow looked like a Top Gun pilot firing missiles at a fleet of F-16’s call-signed Chase, Jefferson, Marshall, and Moss.  By mid-season, each time Burrow launched one of his perfect spirals into the Saturday night, Death Valley air, it was if he was summoning the ghosts of past Tiger legends who suddenly became visible in the contrast between bright lights and purple sky.  This kid was special.  The Heisman chatter started. And as the season went on and Burrow continued to put up video game numbers, the crescendo came loudly when he embarrassed the mighty Alabama defense in front of their home crowd in Tuscaloosa.  A 31-home game winning streak was snapped, and Nick Saban threw one of his signature sideline tantrums, smashing his headset to the ground as Joe threw completion after completion in front of the lifeless, red and white pom poms.

Tiger fans just thought that was the kind of great athlete we had been blessed with.  But on December 13, 2019, Joe Burrow boarded a plane to New York City as the prohibitive favorite to win the Heisman Trophy, especially after racking up every award a quarterback could in Atlanta a few days prior.  As he took his seat, he was handed a letter from the Cannon family who told Joe of their admiration of him and how much he reminded them of number 20. But that still wasn’t it, it still wasn’t the moment.  As the dragged-out award ceremony came to the finale, it was made official that for the rest of Joe’s life, he would be introduced as “Heisman Trophy Winner Joe Burrow.”

From his first words, it was obvious that Joe was overcome with emotion.  But on what was arguably the biggest day of his 23 years on Earth, he still refused to make it about him.  He thanked his family, his teammates, his former coaches at Ohio State and the Ohio State University for giving him a chance. He had not been heavily recruited out of high school. He then lovingly fawned about his community in Athens, Ohio, about how the poverty rate was twice the National Average.  He then talked of his new home in Louisiana, and how he was embraced as family and taught how to eat crawfish. Then he directed his remarks to “Coach O” and showed the vulnerable emotion that gave his coach no room for doubt in the love that his quarterback had for him.  The raw-meat Cajun with the body of the Incredible Hulk and the voice of the Cookie Monster was visibly shaken and was only snapped out of his trance when he was simultaneously touched on the hand by his wife and Burrow’s mother.  That was the moment.

I waited in the press room on the 6th floor of the Marriott Marquis Hotel in Times Square as Burrow and his entourage came through the rear entrance.  I overheard him repeating “I forgot, I forgot…” as he peered over to the media who filled the tables and said, “I need your help, I forgot something important.”  Burrow took the podium and immediately said, “I’m sorry Clyde.  Y’all I mentioned everyone except Clyde.  I’m so sorry Clyde, please tell him.”  He was referring to the standout running back and his favorite go-to on short passes Clyde Edwards-Helaire. Even at his Heisman press conference, Joe refused to make it all about himself.  After taking a dozen or so questions, Joe headed to a side room where he was going to do a one-on-one with ESPN.  As he walked past me, I tapped him on the shoulder and said, “Way to go Joey, we’re all real proud of you.”  He look down (even though I’m just over 6’ he’s still four inches taller than me) and said, “Thanks, but save it all for later, I still have one more trophy I want more than all of these combined.”  I was immediately reminded of a few weeks ago in Atlanta when I was standing behind Burrow and Orgeron after winning the SEC Championship as they played hot potato with the game ball. Joe pushed the ball back into Coach O’s hands and said, “Give it back to me after we win the National Title.” Twenty-three years old and already a legend.

Joe Burrow’s legendary, heartfelt speech in which he didn’t forget where home was, and didn’t let us forget where he now considers home did more than inspire sports fans around the country.  As of the date of this writing, nearly half a million dollars has been raised through a social media fundraiser for the Athens County Food Bank in Burrow’s hometown, all because he mentioned the poverty that plagued the area in his acceptance speech of the top honor in College Football.  Imagine if #9 can deliver a National Title to LSU in the same Superdome where his hero #9 Drew Brees plays on Sundays, in the year 2020 with #20 Billy Cannon looking down at us all with a beaming smile? That, my fellow Tiger fans, would be the chorus to the Ballad of Joe Burrow.