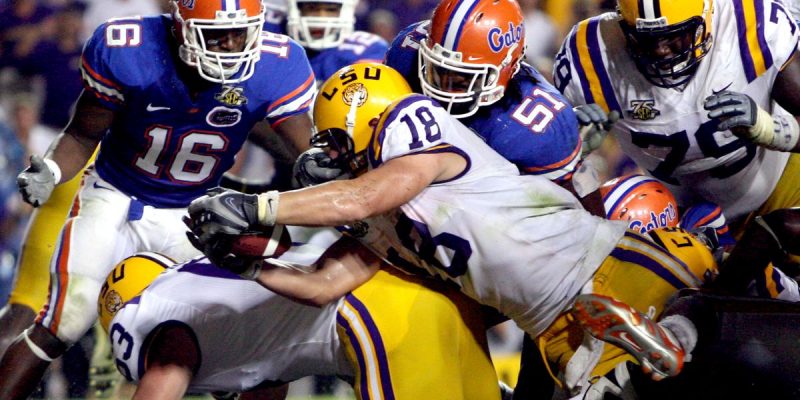 It was that big.

It became the toughest ticket in the history of Tiger Stadium.

Even tiger mascot Mike VI made his Death Valley debut for this one.

Afterwards, after living up to the hype, it would even being called the best college football game of the decade.

First of all, this was not just about 2007. One season earlier, it was the LSU-Florida winner—namely the Gators—that would largely determine who Oklahoma’s opponent would be in the 2006 BCS National Championship game.

In that 2006 game, LSU’s self-inflicted wounds did just as much as Florida did to beat them. A safety on a kickoff involving sure-handed Early Doucet ring a bell?

Chris Leak, Tim Tebow, and the Gators, of course, won that championship, and LSU was left with the consolation prize of a Sugar Bowl trouncing of Notre Dame, a final No. 3 national ranking, and the distinction of being one of the best Tiger football teams in school history, despite not having won any of the division, conference, or national championships.

So there was more than just the 2007 championship chase on the line on October 6 in Baton Rouge. There was a sense of reconciliation with a game and a national championship the Tigers felt like they missed out on the year before.

One of those scores to settle was with Mr. Tebow. It did not go unnoticed by Tiger players and fans that the Gator freshman quarterback took it upon himself to become The Swamp’s biggest cheerleader in celebrating touchdowns in the 2006 game, or any game, for that matter.

So the LSU student body, if you remember, welcomed Tebow to Tiger Stadium by somehow getting his cell phone number and sending him hundreds of texts and messages the week leading up to the game. Things like where to get a good catfish dinner or find the best churches in Baton Rouge, for sure.

The game was so big that both the CBS Early Show and ESPN College Gameday staged their programs on the LSU campus. It was the second time already in 2007 that Gameday set up shop in Baton Rouge.

LSU. No. 1 in the AP poll for the first time since 1959 and the days of Heisman winner Billy Cannon.

Florida. Defending national champions and smarting from a home loss to Auburn the week before. With a now-sophomore quarterback so easy to hate.

Tiger fans were perhaps ready for a coronation instead of a war.

But you may remember that it was the Gators who looked like kings in controlling most of the game. You may even remember thinking there was no way LSU could overcome Tebow, who was proving unstoppable in his first true road test as a starter.

He made sure to let the LSU student body know what he thought of their little week-long prank too. After scoring to put the Gators up 10-0, you may remember him gesturing to the fans as if he had a cell phone, mouthing the words, “Call me.”

It was the first of three separate times in which the Gators held a 10-point lead. LSU would scrape out a drive to pull within striking distance, one on a gut-wrenching fourth down touchdown run by backup quarterback Ryan Perrilloux, that somewhat eased the pain of an earlier field goal miss.

But Florida bounced right back and went up 17-7. This game just didn’t seem winnable.

Especially after Tebow and Florida, after the crowd had just burst at the seams when they heard from the public address announcer that the Coaches Poll’s top-ranked team and rival that never was, USC, had just been upset by Stanford, and after LSU scored to grind to within three at 17-14, took all of three plays to carve up the LSU defense and score yet again.

24-14 simply seemed insurmountable. It appeared the Gators would hang 50 on LSU’s vaunted defense.

But as it turns out, 24 was all they would get.

You may remember the momentum shift at the end of the third quarter, when the Gators finally showed a chink in their armor with a fumble at midfield. Six plays and 31 yards later, David would miss his second field goal of the game, this one from 37 yards out, but there was hope. Florida had finally shown an indication of weakness, and perhaps of folding to the stress imposed by a raucous Tiger Stadium crowd.

You probably remember knowing that LSU simply had to punch it into the endzone this time.

And it’s exactly what the Tiger offense did when, on fourth down from the Gator four-yard-line, Flynn found Demetrius Byrd for the touchdown.

You may remember, and still may not believe, that the Tigers held Florida to a three-and-out on their next possession, and had the ball, sixty yards from the lead, with nine minutes to go in the game.

Surely you were thinking, don’t score too soon…but surely there’s no way to milk all of these nine minutes, is there?

You know you remember.

You also remember three minutes later and another 4th and 1 inside the Gator 10-yard-line.

And once again, Jacob Hester.

As the Tigers were poised with another set of downs to take its first lead of the game, you may suddenly recall, as you took a deep breath and prepared for one more glorious first down, that out of all the clutch fourth down runs on this night, there was one 4th and 5 converted by Flynn on a fake field goal run wayyyyy back in the third quarter.

If you know football, you know that if it were not for a bounce here and an inch there, LSU could have very well gotten shut out in this game.

But you also know that that’s what made this game so great.

But even if you forget all of this, all the little details, all the little nuances that made this the most exhilarating game of the year (to that point, anyway) there are two things—two men—you should remember even forty years from now.

What people may forget is that on that fourth down inside the Gator 10, Miles was passing up a game-tying, chip shot field goal by putting the ball in his senior running back’s hands.

It took the guts of a head coach to actually make the call to go for it on fourth down a total of five times in the game, including three times on that final, fateful drive. It took the grit and determination of a running back to keep converting each one by seemingly the nose of the football. In the end, it made his head coach a gambler and not a goat, a champion play caller and not a chump.

All of it, every single second of it, was legendary.

You may remember thinking what Miles might have done had his bell cow not crossed the endzone on the third down play in what would end up being the winning score.

And you probably know the answer to that now.

“We pretty much knew it was going to be a chance to win the game,” Hester said. “Coach Miles said, ‘I believe in you. I don’t want a tie. I want to go out and win this thing.’ When your head coach has that kind of respect and trust in you, you want to prove something to him.”

“I gamble more than you think,” Miles said with a knowing grin on his face. “Their offense is a possession offense.… They keep the ball. We knew if we got some fourth-down opportunities, we knew [we] were going to make those calls. We were going to make ‘em. We just knew that.”

You may remember Florida players crying after the game, and maybe even gaining some measure of respect because of it. That is what college football is all about. In a game of inches, literally, it could have very well been the Tigers and their fans shedding the tears after the final buzzer.

You may even remember that the Gators repaid LSU in a big way the next season in The Swamp after Meyer showed film of the 2007 game over and over again to his players.

And that that Florida team took their turn in winning that season’s national championship.

But on this night and for this 2007 season, it was LSU’s time. The coronation didn’t happen as smoothly as Tiger fans might have wanted, but the crown most certainly followed the war. Greatest game of the decade? Hard to say. But the passion and heart-stopping drama behind 2007 LSU-Florida is undeniable, and the reason the game of college football is so revered.

And the season was just getting started….