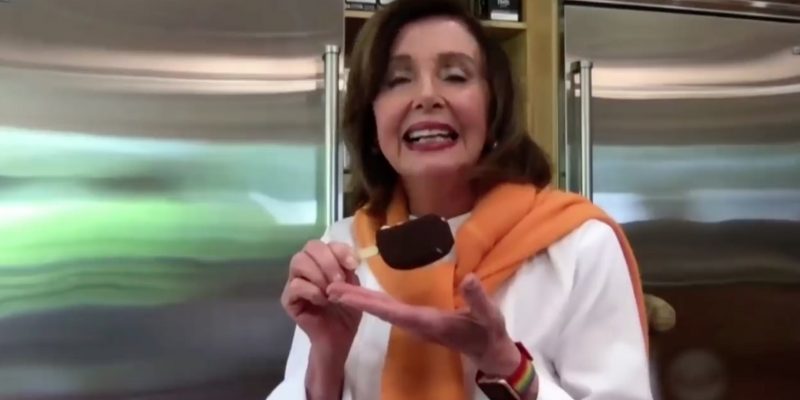 When Republicans failed to deliver for the American people and lost their majority in the United States House of Representatives in 2018, a true poison was unleashed on the nation. For a second time, Nancy Pelosi became U.S. Speaker of the House and in her latest stint in this position she has been incredibly damaging to this country.

For months, she pursued a divisive and unnecessary impeachment of President Donald Trump. Instead of working to fight the coronavirus in January and February, congressional Democrats were only focused on impeaching and convicting President Trump. The Ukraine hoax which led to the flimsy impeachment charges was as ridiculous as the Russia hoax, but it did not matter to Democrats inflicted with Trump Derangement Syndrome.

As the impossible dream was nearing an end, Pelosi, in an act of partisan rage, tore up the President’s State of the Union speech, the most disrespectful behavior ever displayed by a U.S. Speaker of the House on national television.

Since that time, Pelosi and the Democrats have been working non-stop to blame the President for an “almost sinful” response to the coronavirus, while pushing dangerous legislation to financially ruin the country.

Instead of joining the President in affixing blame on Communist China for the origins of the coronavirus pandemic, Pelosi calls it “an interesting diversion.” She blames the President of the United States for acting too slowly in protecting Americans, even though he instituted the travel ban from China that saved the lives of countless Americans. Democrats did not support the travel ban but called it “racist” and “xenophobic.”

When President Trump inherited his position, he was left with an empty cupboard by former President Barack Obama. The military had been decimated, the economy was in the doldrums and the supplies to respond to health emergencies were woefully inadequate.

Under Trump’s leadership, the country has built thousands of ventilators, produced an amazing amount of personal protective equipment, ramped up coronavirus testing to record levels and started a new project aimed at creating a vaccine for the virus. Instead of praising the administration for its hard work, Pelosi can only find fault with President Trump. She is not interested in pursuing a positive solution to the pandemic, only pushing a partisan agenda.

While President Trump was working every day since the beginning of the lockdown, Pelosi was on vacation in her California mansion doing television interviews in front of her expensive freezer full of gourmet chocolate. Now that she is finally back on Capitol Hill, Pelosi has been promoting her latest gimmick, a $3 trillion relief package, known as the HEROES (Health and Economic Recovery Omnibus Emergency Solutions) Act. On Friday night, it passed the U.S. House of Representatives by a 208-199 vote, with the support of only one Republican.

The supporters of this legislation are obviously unconcerned that the nation has spent almost $3 trillion in three coronavirus relief packages and has a national debt that now exceeds $25.2 trillion. This bill is horrific, for it is purely a partisan shopping list of goodies for leftist causes. One of them is the marijuana industry, so the word “cannabis” is used more often than the word “jobs” in the 1,815-page legislation.

The bill also includes $10.5 billion for American colleges and universities, despite the $14 billion in spending already allocated for higher education in the last relief package. There is also $25 billion allotted for the U.S. Postal Service, the latest bailout to keep the agency operating. It just delays the inevitable day of reckoning that must eventually arrive for an entity that is both inefficient and outdated.

Other pet liberal causes are handsomely funded in Pelosi’s legislation. It includes $3.6 billion for states to enact mail-in balloting and early voting, causes advocated by Democrats to help their electoral chances. The bill also includes about $1 trillion in funding for state and local governments dealing with coronavirus related budget shortfalls. This will force American taxpayers to fund the out of control spending of liberal governors who refuse to trim their spending or enact even modest budget reforms.

The most egregious aspect of the bill is that there are has no restrictions on illegal aliens receiving financial assistance. This once again shows that Democrats are totally uninterested in border security, fighting illegal immigration or in any way penalizing those who have broken our laws to enter the country.

The disastrous HEROES Act should surprise no one, for Pelosi and her cohorts drafted the legislation without collaborating with House or Senate Republicans or the White House. Even South Carolina Democrat Congressman Joe Cunningham called the bill “Washington at its worst.”

Fortunately, the legislation will be DOA when it reaches the U.S. Senate and President Trump will surely not sign the bill in its current form. Nonetheless, it showcases the importance of the GOP winning back the U.S. House in the fall and retiring the most left-wing House Speaker in American history. Voters must also award Republicans with a U.S. Senate majority and re-elect President Trump for another term.

This legislation should remind Americans of the dangerous policies advocated by Democrats. It would be truly disastrous for our nation if this bill and the rest of the radical Pelosi agenda would ever become enacted into law. It should motivate millions of voters to flock to the polls in November to save our country from such a perilous future.

Once again, we are reminded that elections have consequences; however, this November, the survival of our nation is genuinely at stake.