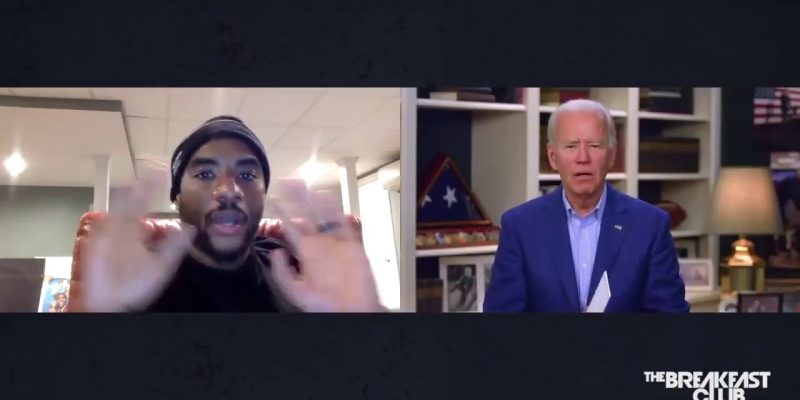 Presumptive Democrat nominee for President Joe Biden is in hot water again after making what many are calling a racist statement Friday morning on The Breakfast Club with host Charlamagne.

Toward the end of the fifteen minute interview Biden says, “If you’re having trouble figuring out if you’re for me or Trump, then you ain’t black.”

The controversial statement set the internet on fire, see his words for yourself below:

The Breakfast Club’s Twitter account posted a poll asking followers what they thought about Biden’s comments and, so far, the results spells disaster for Democrats:

#joebiden said “If you have a problem figuring out if you are for him or Trump.. you ain’t black” Do you agree ??

At the time I’m writing this, the results are an overwhelming negative against Biden with roughly 90% of respondents saying they do not agree with Biden’s statement.

The interview has infuriated black conservatives including rising Republican star Stephen Davis who has been labeled “MAGA Hulk” due to his bodybuilder physique.

“Joe Biden you did not issue me my blackness. You cannot take it away. You will not race-bait me back to the DNC plantation. Looks like Joe Biden wants to put us black people back in chains.”

Check out his slam-dunk video response below:

The major slip-up by Biden jeopardizes the support of a major voting block that Democrats have long taken for granted, and one that Republicans seem to be seriously courting for the first time in recent memory.

The Trump campaign released a statement and video ad in response to the interview saying,

“Joe Biden’s racist and dehumanizing remarks about Black Americans proves that he doesn’t believe Black men and women are capable of being independent or free thinking.

He doesn’t deserve the vote of Black Americans.”

The Trump 2020 campaign website is capitalizing on Biden’s latest mistake as they are now selling t-shirts with “#YouAintBlack -Joe Biden” printed on them.

Interested in more national news? We've got you covered! See More National News
Previous Article YOU DON’T SAY: Fauci Tells CNBC What Many Americans Have Been Shouting from the Rooftops
Next Article Trump Tells Governors to Open Places of Worship, Declares Them “Essential”