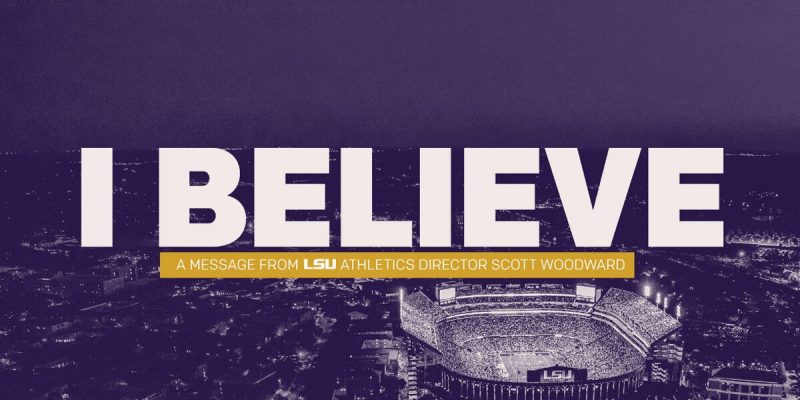 The entire sports world remains in a state of uncertainty, of course, but that hasn’t stopped LSU athletic director Scott Woodward from floating some lofty hopes for the upcoming season.

With the rest of the country seemingly arousing, albeit slowly, from a collective slumber, the light tower on the stormy sea seems to be working again for the first time in two months.

“I see sometime in June our student-athletes getting back to campus,” Woodward said in an interview Wednesday evening on the “Coaches Caravan.”

“Our kids are prospering and chomping at the bit to get back.”

#LSU athletic director Scott Woodward says on LSU's virtual Coaches Caravan that the program is getting ready for Phase 2, which is "getting our athletes back."

Says he expects athletes to come back sometime in June. pic.twitter.com/28ZNuhZASk

As the end date for all athletic events is approaching (May 31), Woodward and other athletic directors are awaiting word from the SEC on whether or not that date will be extended. Woodward said the athletic department is preparing for all possible scenarios.

Of course the biggest question for Tiger fans is the end game uncertainty: Will college football be open for business come the first weekend in September?

“We are planning, and we are doing everything we can to control that we’re playing on Labor Day weekend,” Woodward said. “You can rest assured that our effort is to play football and to play twelve games this season.”

Still, Woodward and the athletic department are aware that there is a very delicate process involved to get them there.

“We have top concern for our student-athletes,” Woodward said. “We’re making sure that is paramount, that we do these things we can control because that’s one thing in our hands that we can help and we can do better.”

LSU has implemented a groundbreaking plan to move forward. One of the main cogs in this effort has been senior associate athletic director Shelly Mullenix, who said Tiger athletic trainers’ communication with all athletes has remained unbroken since the quarantine began.

“It’s something that we were doing anyway, but I think it’s different when you’re talking to someone on the phone as opposed to seeing them in person,” Mullenix said.

Woodward said there are three phases of the process to achieve.

“It’s kind of a three-pronged approach that we’re taking, and we’ve already gotten our staff back in football,” Woodward said. “We have really strict guidelines of what and how we practice being around folks with masks and proper social distancing. We kind of led the league in terms of protocols and how to do that. These athletes are prospering and chomping at the bit to get back.”

“This is the one we have no idea about,” Woodward said. “When are we going to get butts in the seats? I don’t know the answer to that. I think probably middle of the summer sometime we’re going to have to decide what we want to do.”

An empty Tiger Stadium in the fall of course wouldn’t be Tiger Stadium. Woodward and the department should be commended for pioneering such efforts to move this situation along. Hopefully by the middle of summer this whole narrative will work itself out and Death Valley will be rocking as usual.