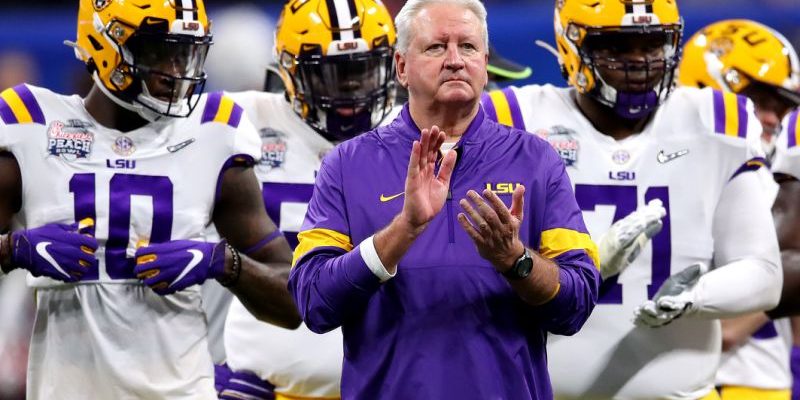 It may seem nothing is materializing in the realm of LSU football since we can’t see any of the progress, but that doesn’t mean things aren’t shaking behind the scenes.

Athletic director Scott Woodward said that while the university is expecting players to return to campus starting June 1, it has to continue to consider all variables.

According to coaches, the Tigers are chomping at the bit to get back to the schedule, and have been putting in the work while everyone waits. Not the least of those players is presumptive starting quarterback Myles Brennan.

“I think Myles is going to have a great season,” offensive coordinator Steve Ensminger said. “Spending two years behind Joe Burrow did nothing but help him. I’m very confident Myles is ready to lead this football team. Get on the bandwagon and let’s go.”

Brennan tweeted his pleasure with his coach’s support with a simple “It’s time.”

Head coach Ed Orgeron said that Brennan is up to 218 pounds, after arriving on campus in 2017 at a skin-and-bones 180. In his backup role, Brennan tallied 353 passing yards with one touchdown in 2019, and showed flashes of brilliance that made him one of the most coveted quarterbacks coming out of high school three years ago.

Ensminger of course will be looking to repeat last year’s success not only for the program, but in honor of his late daughter-in-law, who was killed in a plane crash the morning of LSU’s semifinal victory over Oklahoma.

Unfortunately, it took that tragedy to finally put some of the much-deserved spotlight on Ensminger, who, despite his title, had largely taken a back seat in the media to young wizard Joe Brady, who has since left Baton Rouge to be the offensive coordinator of the Carolina Panthers. Despite Brady’s prodigious impact on the program, the offense should continue to hum just fine as Ensminger continues to make the calls.

Another skill player Ensminger singled out was senior wide receiver Racey McMath, who caught 17 passes for 285 yards and three touchdowns in 2019. The Tigers’ receiver position appears primed to be a dominant force again, and Ensminger knows it will be up to the staff to scheme around opponents’ obvious defensive strategy of double-teaming Biletnikoff winner Ja’Marr Chase and Terrace Marshall.

With such speed and athleticism catching passes from Brennan, and with the talent and foresight high up in the coaches box calling the plays, look for LSU’s offense to be explosive once again in the fall.

Interested in more news from Louisiana? We've got you covered! See More Louisiana News
Previous Article LEADING THE WAY: LSU Athletic Director Planning for June Return for Players
Next Article New Orleans Will Never Recover From COVID-19, And Here’s Why…