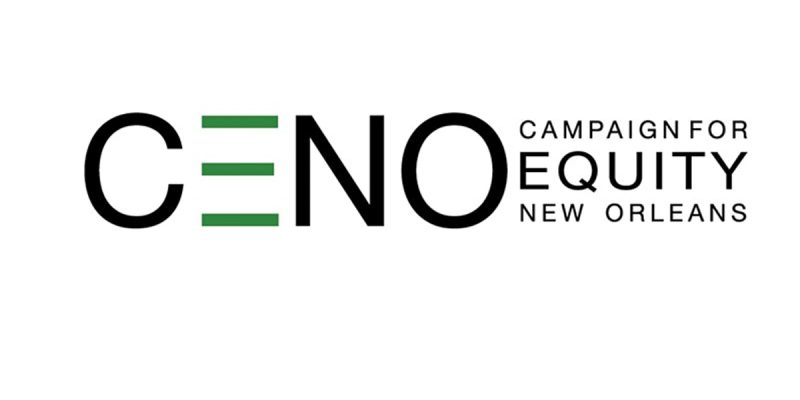 You’ve probably never heard of something called Campaign for Equity: New Orleans, and there is no particular reason why you should have. They turned up not long ago putting on events around the city whereby their community activists engaged in “training” of politicians, bureaucrats and regular people soft-headed enough to buy into their preachings about how racism is endemic to every facet of American life and how white folks don’t even know how racist they are.

It’s all the usual bullshit, and there’s nothing really new to be learned by studying the Campaign for Equity: New Orleans. There are more scams like this floating around than you can shake a stick at, and they all follow a similar model: it’s mostly the same people perpetrating them, and these goofy-named organizations pop up as a direct result of grants from white leftist organizations from far away (in the specific case of the Campaign for Equity: New Orleans, it’s a $600,000 grant from the W.K. Kellogg Foundation, which along with George Soros’ Open Society Institute is a chronic offender in this regard), put on events and make noise until the money runs out, and then fade away before the organizers come back with a new scam.

Or, better yet, make enough of a name for themselves to either (1) run for a city council or state legislative seat, or (2) get a public sector job they don’t have to do anything in.

New Orleans is littered with these scam “equity” organizations which exist on out-of-state foundation grant money to do virtually nothing other than rile up the city’s poor by telling them they can’t advance in society because of racism and the only way to fix things is more and more radical politics.

Here’s an example from a press release earlier this week…

NEW ORLEANS – Campaign for Equity: New Orleans (CENO) today calls upon all elected officials, business leaders and both city and statewide task forces to center racial equity as the focus of its work given the disproportionate impact of COVID-19 on African Americans. “If COVID-19 teaches us anything, it’s that an injury to one is an injury to all: public health is economic health,” said Emily Madero, CENO co-founder. “An equitable recovery is the first step but we must use this as an opportunity to recover to equity.”

CENO is working to shine a light on the economic disparities that existed across our city before COVID-19 but are now evermore apparent. CENO continues to engage its 1,200-person coalition through a series of “Virtual Naked Lunches” and the participation has been overwhelming. It is a testament to the willingness of this group of diverse leaders to come together to put racial equity at the forefront of this pandemic.

A recent report by The Data Center shows that people of color are overly represented in essential retail, transportation, and health care — a legacy of discrimination in labor markets that has kept African-Americans at the bottom of the socio-economic order.

“The COVID-19 pandemic has affected all of us, but its reach and devastation have been far greater among African Americans in our region” said Andy Kopplin, President and CEO of the Greater New Orleans Foundation and an alumnus of CENO’s two-day Racial Equity Institute training. “That’s why we must recognize these racial disparities from the outset and then work intentionally in our recovery to eliminate them.

To give all New Orleanians and all Louisianans the best chance in the recovery, CENO has provided the following guidelines to ensure the City’s economic recovery efforts are fair and equal for African Americans and other marginalized communities who have been more susceptible to the detrimental impact of COVID-19.

Jason Williams, New Orleans City Council member and alum of CENO’s two-day Racial Equity Institute training commented on the need for these guidelines, “We have an incredible opportunity ahead of us – to seize this moment to address systemic challenges so that we are a more equal and more prosperous city in the future.”

So you’ll know, CENO doesn’t really have a “1,200-person coalition.” We know that’s a lie because if they did their Facebook page would have more than four likes to it. They claim to have been around since 2016, but you’d think that if they had been, somewhere along the line they might have put up a website – which they haven’t.

What they have is Emily Madero, the “co-founder.” She’s a nice white leftist lady from Portland, Maine who descended on New Orleans to attend Tulane, and her day job involves putting on the French Quarter Fest every year. CENO is apparently a way for her to get street cred among the music scene in New Orleans. They’ve also got Kopplin, who now runs the Greater New Orleans Foundation after serving as Kathleen Blanco’s chief of staff and Mitch Landrieu’s deputy mayor; Kopplin gave Madero some funding for CENO as well.

Lest you think this is simply a bunch of white leftists pandering to the black underclass, CENO has some color after all. Also affiliated with the organization is Alphonse Smith, who’s the executive director of the Arts Council of New Orleans.

Not too much color, though. Another organizer is Liza Cowan, who’s a Dartmouth and Harvard grad and “an independent fellow studying urban water finance in New Orleans.” Cowan descended on New Orleans after Katrina.

Every time something terrible happens in New Orleans the city is shortly set upon by out-of-staters looking to run scams like creating “equity” for the poor and downtrodden. They bring with them chunks of cash from left-wing foundations, and they spread a message of hopelessness and revolution to people who desperately need meaning and inspiration to their lives. It isn’t surprising that here and there, people like the CENO scam artists are able to radicalize hotel maids and busboys with promises of a free lunch wrenched out of “racist Republican” businessmen from the suburbs.

We don’t need to make more of this than is necessary. This is nothing more than a way to fleece idiots in charge of leftist foundations into forking over some easy money. CENO is a waste of time and not deserving of much attention.

That said, the combined weight of these leftist community organizing groups – the Power Coalition for Equity and Justice, the Jeremiah Group, Converge for Change,  the Louisiana Center for Children’s Rights, the Orleans Public Education Network, New Orleans Workers’ Center for Racial Justice and too many others to count, much less list here – has made a difference in that city, and not a good one.

If you’re trying to figure out how LaToya Cantrell, a mouth-breathing moron straight outta Compton with a six-figure tax debt and no resume to speak of, managed to get elected mayor of that city over Desiree Charbonnet, a judge from an old and respected New Orleans family, in what was more or less a rout, this is why. Cantrell was the Hard Left candidate, and all that foundation money pouring into that city for more than two decades has radicalized enough of its residents to make a socialist majority there.

The effect of which being that New Orleans no longer has the will to recover from the Wuhan virus. It doesn’t understand that if it’s going to make its economy viable again it has to become competitive with other cities in the South and across the country, which, outside of tourism, which Cantrell has now destroyed, it wasn’t prior to the virus.

CENO’s message, that New Orleans has “an incredible opportunity” to pour even more money into organizations like CENO, and somehow that’s going to fix that city, contains nothing about bringing new industry and better jobs into New Orleans. It contains nothing about addressing behavioral issues making the communities it serves vulnerable not just to the virus but other negative health outcomes and financial and legal struggles. Hell, if these people actually were interested in bringing home a deliverable to the communities they say they serve they’d be supporting tort reform efforts in the legislature which could quite reasonably be expected to free up $50-75 per month to poor households in lower auto insurance premiums.

Instead they want more mail-in ballots at election time. Which is the bill Mandie Landry, the new lily-white Hard Left state representative from the Garden District who took over for the term-limited old-school Democrat Walt Leger, brought to the Legislature this session.

If we were more optimistic we’d say this is a call to arms and scream something has to be done to fight back against the out-of-state left-wing money turning New Orleans radical and putting it on the road to becoming Caracas North. But it’s far too late for that.

Instead, we’ll say that if you’re still in New Orleans and you’re not a communist, it’s past time to get out. Move your business to Jefferson or St. Tammany or even St. Bernard, dump your house on the next Bernie Bro millennial transplant moving in with daddy’s money, and don’t look back.

Someday the Saints will play in a new stadium along Lake Pontchartrain, there will be a Commander’s Palace at the foot of the Causeway in Mandeville, Endymion will ride down Metairie Road and they’ll be doing Jazz Fest at Lafreniere Park, or maybe some new place built specifically for it. But New Orleans itself is dead and rotting just like those bodies at the Hard Rock Hotel site.

It’s finished. Sure, you might eventually see a small recovery in tourism, at least for a while. But with Cantrell and the white leftist do-gooder mob combining in an effort to radicalize what’s left of that population, it’s all over but the shouting for the Big Easy.

It’s sad, but it’s reality. Time to recognize it and act accordingly.