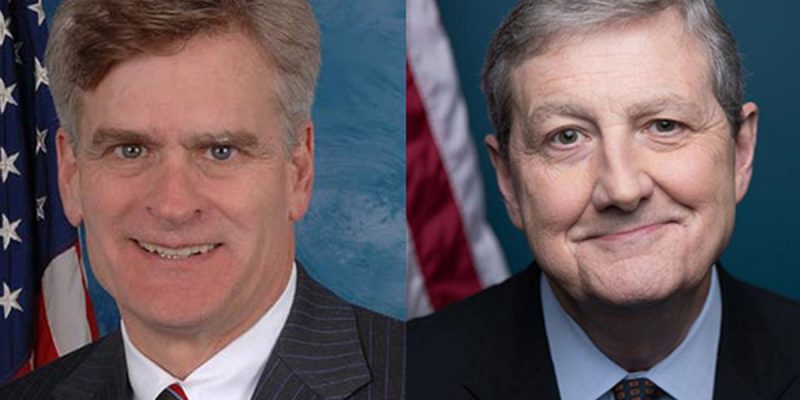 A number of fault lines have ruptured among Louisiana conservatives concerning a potential bailout of state finances as a consequence of the Wuhan coronavirus pandemic, reaching up to its highest elected federal officials.

Almost every state imposed some kinds of economic restrictions since the middle of March, and even those without these or those that had issued relatively relaxed and/or short-lived strictures have been affected by larger trends, such as the dramatic slowdown in air traffic, falling capital markets, and fear of virus transmission in the public. Combined, such dynamics have sapped revenue-producing mechanisms for states, costing them an as-yet untold amount in the aggregate.

This has led to a debate over whether the federal government, which already has apportioned $2 trillion to fight effects of the virus, should have its taxpayers pony up more to bail out state and local governments. And Louisiana’s two Republican senators have taken a leading role in this, to the consternation of many conservatives.

Sen. Bill Cassidy has co-authored legislation to send state and local governments $500 million that includes direct aid to plug revenue shortfalls. His junior colleague Sen. John Kennedy has authored a bill that would take leftover funds from existing legislation that finances state and local government virus response efforts and let them apply these dollars to fill in the revenue gaps. Unlike Cassidy’s bill, Kennedy’s wouldn’t allow excess money to prop up pension funds.

Neither in their present form is satisfactory, for neither addresses the moral hazard they present. Cassidy’s doesn’t at all, in essence absolving states of their responsibilities to have acted in a fiscally prudent manner that would have ameliorated this fiscal crisis before it began.

For example, on the spending side of the ledger some states built large rainy-day fund cushions, or did not pay outsized unemployment insurance benefits so that they had plenty of money stored with the federal government to pay these, or more appropriately funded their pension obligations, or didn’t pay more by expanding Medicaid (even as the federal government raised its contributory share for the program as a virus-related salve), and so on. On the revenue side, they didn’t overload the burden on their largest wealth creators with confiscatory income tax rates on the highest earners whose contributions now will drop disproportionately.

The worst offenders the hardest hit by their partially self-induced economic slowdowns all have reckless policy records. Why did California spend on things like free medical care to illegal aliens when it could have shored up its nation’s worst unemployment insurance bankroll? Why did Illinois, along with New Jersey having the most underfunded pension systems, continue to run budget deficits even after a series of recent tax increases? And New Jersey pursued a spending spree that made it the least healthy state fiscally in the country? Or New York continue to add exponentially to its budget under the thrall of public sector unions and trendy leftism?

Kennedy’s plan, while better in that it wouldn’t subsidize feckless pension policy and wouldn’t push the country further into debt, still doesn’t pass muster because it blesses past poor decision-making without any attempt to change that behavior. Unfortunately, potential adjustments to remove moral hazard probably don’t make it workable.

For example, let’s say the bill has a provision inserted that states can use funds in the expanded way for the next fiscal year only if they change their income tax code to a flatter, broader tax. How long would it take for backsliding to occur as soon as they spent the funds? And even if some time limit with clawback provisions could be enforced, they might find other creative ways around that. As well, they could stall as long as possible in the hopes of a Democrat majority coming to Congress with a president from that party who would legislate a blanket amnesty.

The best solution with the greatest potential to effect long-term beneficial change tells states who made their beds now to lie in them. This will sensitize their publics to the stupidity of their elites’ tax-and-spend agendas, and may provide the impetus for them to throw out the bums of that ideological persuasion after decades of their shell games.

Fortunately, Republican Pres. Donald Trump as well as Republican congressional leaders grasp this, even if Cassidy and Kennedy don’t, with them publicly stating they won’t support such measures. Louisiana conservatives are right to feel disappointed with their state’s senators on this matter.

Interested in more national news? We've got you covered! See More National News
Previous Article VIDEO: Scott Ballard Shows Everybody How To Give Legislative Testimony
Next Article Boy, They Sure Stole A Lot Of Money At The NOLA Convention Center, Huh?