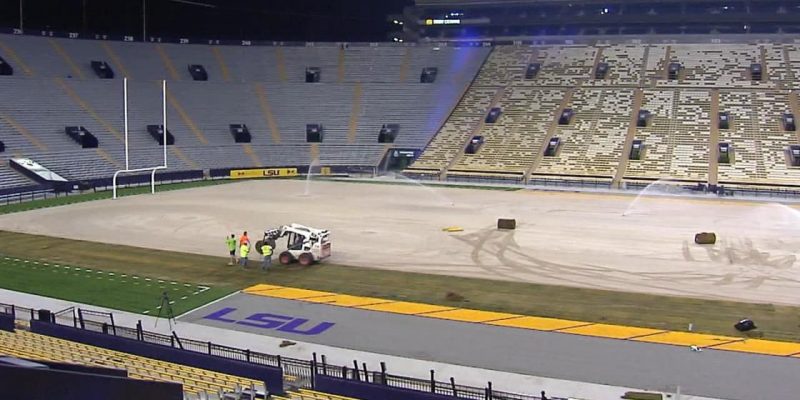 The turf inside LSU’s Tiger Stadium will look a little different this year, and it should go a long way toward making sure the athletes coming in are put in the best position to shine.

As LSU’s barnburner against Auburn wore on in October last year, the typically bright green grass in Tiger Stadium was looking more and more like a cow pasture. It was largely believed to be a result of several inches of rain as Tropical Storm Olga raged over Baton Rouge the night before.

“Receivers are slipping on the back-shoulder throws. You can see how the turf is giving up,” said CBS’s Gary Danielson, concerning an image of torn-up grass.

Social media, of course, was all over the issue. One post blasted the conditions, saying the field “looks like a goat ranch.” Another said: “World class locker room. Pee Wee level field turf.”

While a portion of the field is replaced every year after the Bayou Country Superfest, a complete replacement has not been done in ten years. That changed this week when the 96-year-old pantheon of college football got a long overdue facelift to its field. Crews with Athletic Turf Solutions arrived Wednesday and worked all night until morning, laying down the new sod.

One visible new feature is the artificial turf added to the field’s edges, much like Alex Box Stadium, helping keep the field looking brand new and easier to maintain.

While the rollout happened quickly overnight, the actual process started back in the fall, after LSU’s final regular season home game, a 50-7 trouncing of Texas A&M.

“We knew that we needed to change the profile of this soil and turf, so we virtually (after going through the engineering process), were geared and ready to go November of 2019,” said Emmett David, LSU Senior Associate Athletics Director in charge of facilities. “After our last home football game on December 1, our contractor hit the site running. Ran hard. We’ve had great weather. This is probably one of the cleanest projects we’ve ever had. We’ve not hit a utility. We’ve had hardly any undisclosed conflicts that we had to work around.”

The process from December on is an interesting one.

After workers dug down 18 inches below the former turf level, limestone gravel, fabric, and sand were laid down. That step led to this week, which was the rolling out of the grass.

“This sod that we buy is an engineered centipede,” David explained to Geau247 back in April. “Since we do have time and we’re not pushed, and the weather’s worked for us, we’re going to actually sprig. It’s a washed sprig, which means the soil that was on the piece of that sod is no longer there. It’s a pure sod that’s going down, and we’re going to grow in between May 5-6, all the way to August 1 in anticipation of our first home game in September.

“It’s a pretty simple concept,” he added. “All this stadium, when we catch a heavy two-and-a-half inch rain, rolls down into the bowl, if you will. We do have some catchment systems around the grandstands itself, but some actually roll to the field. What hits the field in a two-and-a-half inch rain in an hour is very impactful. This lower profile we just talked about with the gravel, limestone sand actually acts like a bladder, and we are now actually able to control and hold a lot more water than we have in days past.

“So when we get that two-inch rain at 6 o’clock before a 7 o’clock kick, we’re going to have no impact now. We’re going to be able to hold that water underground until the drainage system, as you know, Baton Rouge is fairly flat, until we can drain downstream and then take the water off.”

This is great news for recruits coming in expecting to fly all over the field, no matter the weather conditions. With the players returning for voluntary workouts June 8, all signals point to a return to Tiger Stadium as planned in the fall, where the new field will finally match that world class locker room.

Interested in more news from Louisiana? We've got you covered! See More Louisiana News
Previous Article SADOW: Cade Brumley As LA Education Superintendent Means Old Days Are Back
Next Article YOU DON’T SAY: Fauci Tells CNBC What Many Americans Have Been Shouting from the Rooftops