…even if the petition Rep. Alan Seabaugh says he has a majority in the House for doesn’t quite pan out.

Section 20. Only the legislature may suspend a law, and then only by the same vote and, except for gubernatorial veto and time limitations for introduction, according to the same procedures and formalities required for enactment of that law. After the effective date of this constitution, every resolution suspending a law shall fix the period of suspension, which shall not extend beyond the sixtieth day after final adjournment of the next regular session.

Meaning that if you want to suspend all or part of the state statute establishing the governor’s power to enforce an emergency declaration, which Gov. John Bel Edwards is using to keep Louisiana’s economy locked down, you need the same vote by which the statute was passed. In this case that’s a simple majority.

Which brings us to House Concurrent Resolution 58, by Rep. Blake Miguez, which made a surprise debut on the House floor this morning and was assigned to the House Governmental Affairs Committee… 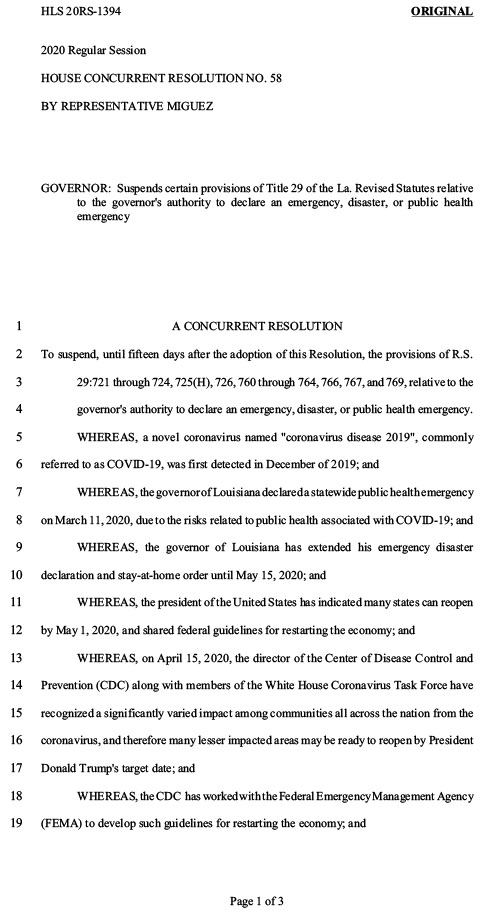 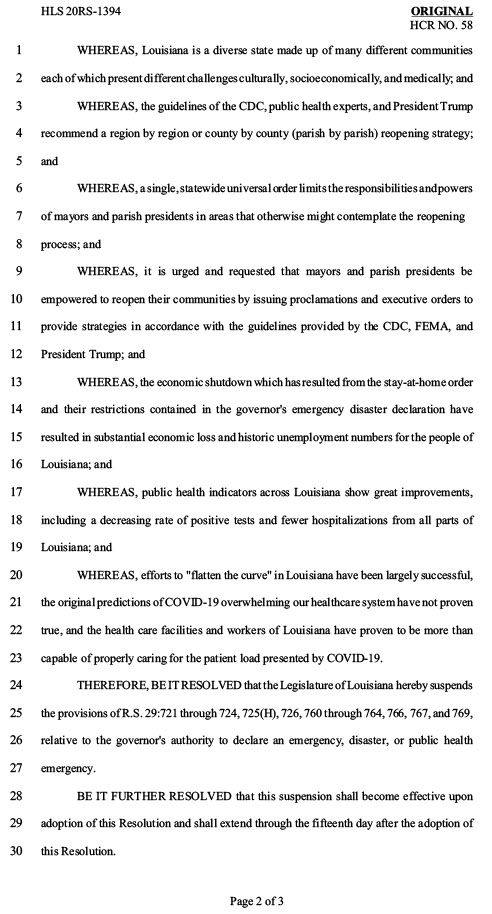 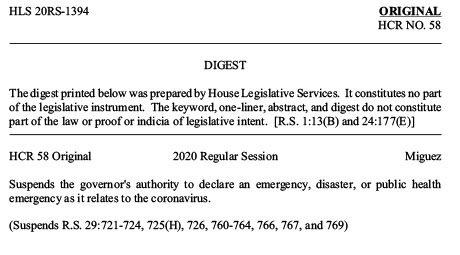 What this essentially does is suspend Edwards’ power to enforce his emergency declaration without necessarily eliminating the emergency itself.

That means Edwards’ claim that wiping out the emergency would cost Louisiana all those federal dollars would be itself wiped out. The issue of the federal disaster money is no longer valid.

This can’t be vetoed, per the constitution. It would need majorities in both the House and the Senate to take effect. It will next be debated in the House Governmental Affairs Committee Wednesday morning, and we’re told that committee’s chairman, Rep. Stephen Dwight, is in favor, as is House Speaker Clay Schexnayder. We’re also told this resolution has overwhelming support in the House; we’re not sure where the Senate is with respect to support for it, though Senate Governmental Affairs chair Sharon Hewitt was a backer of Seabaugh’s petition and would certainly be in favor of this.

The walls are beginning to close in on Edwards, as his shutdown is no longer sustainable politically or economically. It’s time for him to relinquish his dictatorial instincts and back down before the Legislature does it for him.

Interested in more news from Louisiana? We've got you covered! See More Louisiana News
Previous Article AVALLONE: A Shutdown Like This Should Never Happen Again
Next Article MARSH MAN MASSON: THIS Lure Was The Difference Maker!