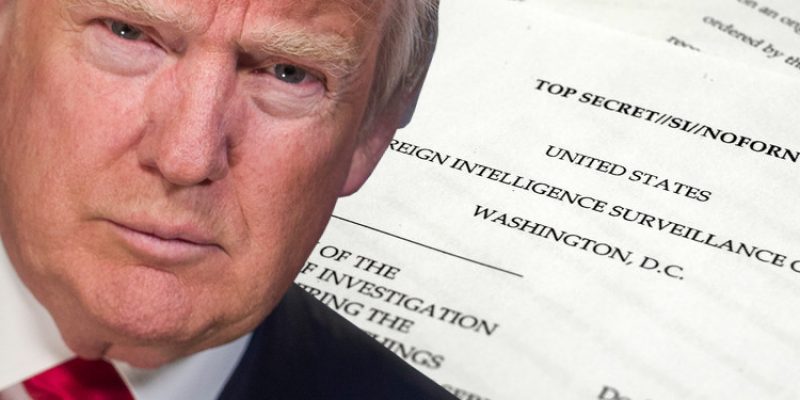 President Trump is taking a stand for civil liberties, something virtually no president has done in the post 9/11 era, as he threatens to veto a bill that some are calling “fake FISA reform.”

After being the target of government surveillance himself based on the manipulation of the “Foreign Intelligence Surveillance Act,” the President is calling for real reforms.

Trump warned the U.S. House tweeting, “If the FISA Bill is passed tonight on the House floor, I will quickly VETO it. Our Country has just suffered through the greatest political crime in its history. The massive abuse of FISA was a big part of it!”

The president today thanked Republican members of Congress for blocking the legislation:

“Thank you to our GREAT Republican Congressmen & Congresswomen on your incredibly important blockage last night of a FISA Bill that would just perpetuate the abuse that produced the Greatest Political Crime In the History of the U.S., the Russian Witch-Hunt. Fantastic Job!”

The “crime” the president is referring to is “SpyGate” also known as “Obamagate” which Trump teased we would learn more about in a recent interview with Fox News’ Maria Bartiromo on Sunday and the following exchange really stood out.

MARIA: “Do you believe President Obama directed the U.S. intelligence agencies to spy on you?” Bartiromo pointedly asked President Trump.

TRUMP: “Yes, he probably directed them but if he didn’t direct them, he knew everything” replied Trump. The President then makes a very concise statement: “and you’ll see that, by the way…you’re gonna see that when the papers come out.”

On another note regarding civil liberties, the president yesterday issued his support for federal involvement in the shocking case of police brutality out of Minnesota writing,

“At my request, the FBI and the Department of Justice are already well into an investigation as to the very sad and tragic death in Minnesota of George Floyd….

….I have asked for this investigation to be expedited and greatly appreciate all of the work done by local law enforcement. My heart goes out to George’s family and friends. Justice will be served!”