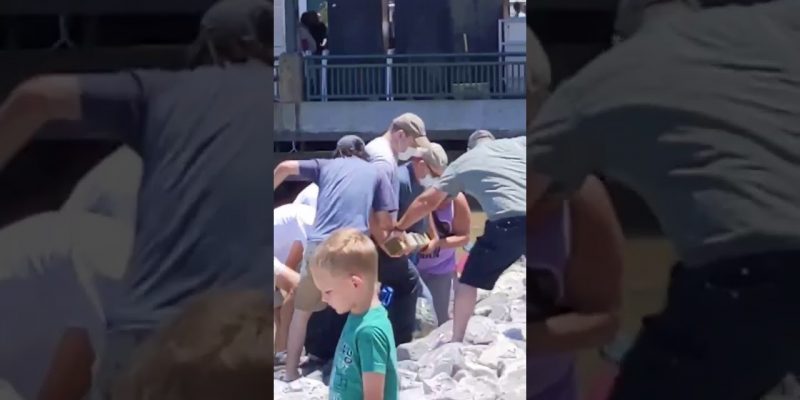 Patriots climbed into the Mississippi River and emerged with a monument that the New Orleans LGTBQ+ rally threw in the Big Muddy the day before.

It was an active weekend for 19th century philanthropist John McDonogh. The LGTBQ+ “Take Back Pride Motorcade” rally became riotous on Saturday afternoon. This scene could be a case study of Trump Derangement Syndrome. A kid whacked the bust of McDonogh with a skateboard. A wire was placed around the bronze neck and the “protesters,” now rioting for equality, yanked the bust from its base like ISIS terrorists. They reportedly loaded it into a vehicle, drove it to the Mississippi River, and rolled it off the sidewalk onto the rocky embankment. They rolled the McDonogh bust until it disappeared beneath the Mississippi’s surface.

That was Saturday. Videos of the riot splashed across social media. The NOPD arrested two individuals, Caleb Wassell, 27, and Michaela Davis, 32, and magistrate court commissioner Robert Blackburn released them the following day. They face minor charges.

Neither The Advocate nor NOPD included the perps’ home town/city if they are Louisiana residents, or write their resident state if they live elsewhere. The Advocate staff doesn’t seem to know much of anything about the city, its artists, or its artwork as clearly evidenced throughout the past five years. And neither law enforcement nor the City attempted to stop the destruction of a city monument, one that has local significance.

The monument from 1938 is unique in New Orleans history in that Angela Gregory, a highly skilled female native New Orleanian sculptor, created it of John McDonogh (1779-1859), the West Bank philanthropist known as the father of the New Orleans public school system. Countless New Orleanians have been educated in the vast number of schools bearing the John Mac name. But he owned slaves so he is condemned by the Left, despite the fact he taught at least two slaves to read, breaking Louisiana law.

In terms of American artists, Gregory was an early female sculptor with works on public display in New Orleans and Baton Rouge. She built a great reputation, was recognized and respected, was referred to as the “doyenne of Louisiana sculpture,” and was an art professor at Newcomb College. Gregory was even  one of very few women fellows of the National Sculpture Society. Now a bunch of misfit Antifa and “equality activists” ripped down then tossed one of her monuments into the Mississippi River, desecrating and literally erasing the legacy of a fabulous New Orleans female artist.

But a group of apparent preservationists took a stand. Instead of attempting to describe the video making rounds on social media, rewatch it below and note the riverboat Calliope played “God Bless America” as the West Banker reemerged from the muddy waters. Note the rescuers were of varying ages, races, and sexes, much to the angst of Leftists.

The best take away was witnessing Americans doing American things to an American song. Cannot get more USA than that. This patriotism could be canned and sold. America needs more patriotic acts.