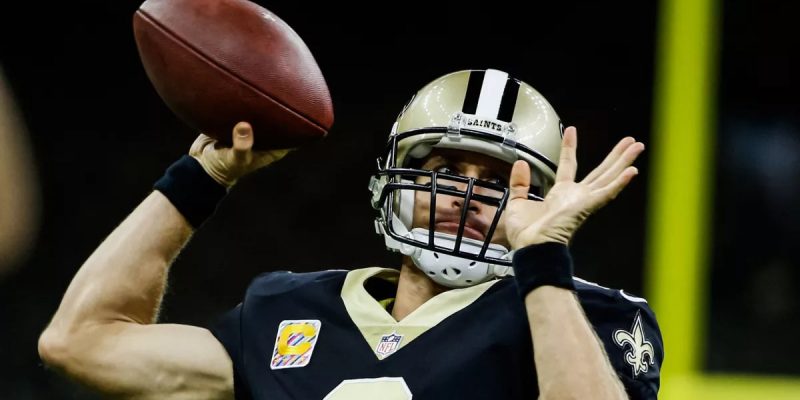 He’s now apologized for comments he made on respecting the flag and the national anthem, so perhaps the high-intensity, low-value controversy which embroiled him yesterday is over. But if Drew Brees would be run out of New Orleans, LaToya Cantrell won’t have to worry about social distancing in the Superdome.

Never has a professional athlete meant so much to a city.

And rarely has a city suddenly become so undeserving to call him one of their own.

The role Drew Brees played in the rebirth of post-Katrina New Orleans cannot be quantified.

At a time when the Crescent City was battered came Brees, who was on his own recovery after undergoing extensive shoulder surgery.

As Brees got better the moribund franchise that had never known tangible success also improved and #9’s accuracy helped make stars and millionaires out of the same teammates who are now trashing him on social media.

And the 504 area code’s spirits were simultaneously lifted as we began the arduous task of rebuilding a major American city that had been totally destroyed.

But Brees wasn’t just a star on the dome turf; he was fully engaged in the community particularly in the local schools. Brees and his wife Brittany put up their money.

And then Brees made us all winners in 2010 leading the team to a Super Bowl victory that ranks in the hearts and minds of so many New Orleanians as one of the greatest moments in our lives.

Black and white, uptown, Central City, Chalmette, and all zip codes in between.

Under his leadership the Saints would have some agonizing close (and no) calls with Super Bowl appearances.

And one of those was lost not due to official incompetence but the inability of a certain safety to cover San Francisco tight end Vernon Davis at the critical moment.

That pokey defensive back, Malcolm Jenkins, had rejoined the Saints this off-season and decided to film a profane tirade against Brees.

Jenkins likes to promote himself as a leading social justice warrior and to his credit has done more than merely pose on Twitter about community issues, particularly with at risk youth.

But his comments towards his teammate were not just unwarranted but should’ve been personally communicated. But Jenkins, who has been heckled as a sell-out by Colin Kaepernick’s obnoxious sidekick Eric Reid, felt he needed to validate himself and went full Kardashian with his grievances and has wrecked the chemistry of the team, perhaps irreparably.

Any of the Twitter jackals trying to destroy the reputation of Brees put up that kind of dough or are they good with just retweeting a trending hashtag and call it a pandemic?

Brees has been outspoken on his opposition to racism, bigotry, and police brutality. He along with his teammates kneeled in the center of the Superdome to protest the latter and Brees recently participated in the social media blackout to mark the death of George Floyd at the knee of a Minneapolis cop.

But that’s never enough for the Left, who demand full compliance as if there were only a single official manner to demonstrate opposition to racial injustice.

Is this about lending your voice to a cause or obeying the dictates of the Twitter mob?

Brees has always stated that he believes the proper way to comport himself during the playing of our national anthem was standing and covering his heart.

Is that such an unreasonable position?

Several of his teammates have engaged in protest during the national anthem with nary a rebuke towards them.

In the hours following Brees’ interview where the quarterback restated his thoughts about the anthem, we have seen supposed Saints fans go from self-professed Who Dats to Faux Dats.

Politics and adherence to the whims of Kaepernick matter more than having made real contributions to our community.

Even for a town that goes out of its way to disappoint, I’d never thought I’d see this day.

If Brees is indeed run off I hope he heads back to San Diego with the Lombardi Trophy.

The Saints wouldn’t have won it without Brees and we will not have deserved to have either in this town.

We will have deserved Daunte Culpepper all along.

Interested in more news from Louisiana? We've got you covered! See More Louisiana News
Previous Article SADOW: What Happens To Tort Reform Will Decide Who Runs Louisiana
Next Article New Orleans As The Host Of The Republican Convention? Ridiculous!