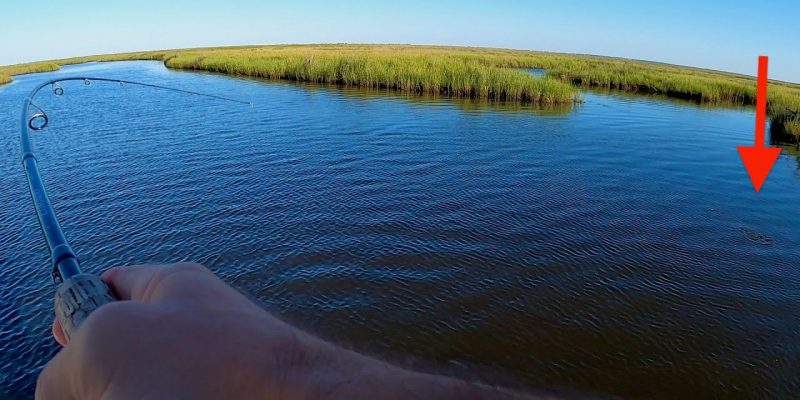 In Louisiana, cool fronts in the summer are about as common as honest politicians. Let’s just say they’re kind of rare.

But a surprisingly strong front passed through the region last week, dropping nighttime lows to levels usually seen in October and almost never in any month without an “R.”

That front also ushered in bluebird skies, sweeping out the cumulus clouds that begin to bubble most summer mornings and coalesce into thunderstorms nearly every afternoon.

Clear skies are one of the key ingredients needed to sight-fish redfish, so that’s what I intended to do the day after the front blew through. I loaded up my casting platform, and set out in search of grassy duck ponds.

Only a foolish fisherman, however, forsakes what Nature is spoon-feeding him, and in such cases, I try to always open wide. When I arrived in the marsh, I discovered a tide that had fallen all night was still heading toward the Gulf, so I temporarily ditched the sight-fishing plan to see what was biting in some beautiful-water bayous.

After making a few unsuccessful casts with a Texas rig, I switched over to a bait that has been fire hot lately, and that trend continued. I put fish in the boat almost every cast before finally leaving them biting to chase redfish in the ponds.

The day didn’t go exactly the way I had envisioned the night before, but I wouldn’t have changed a second of it. It was a delightful reminder that if you go with the conditions, you can always find something biting in the marshes of South Louisiana.

To see the details, be sure to check out the video below.

Interested in more news from Louisiana? We've got you covered! See More Louisiana News
Previous Article VIDEO: And Then There’s The Jared Brossett Fiasco
Next Article US Pastors Council “appalled” by Supreme Court ruling on sexuality