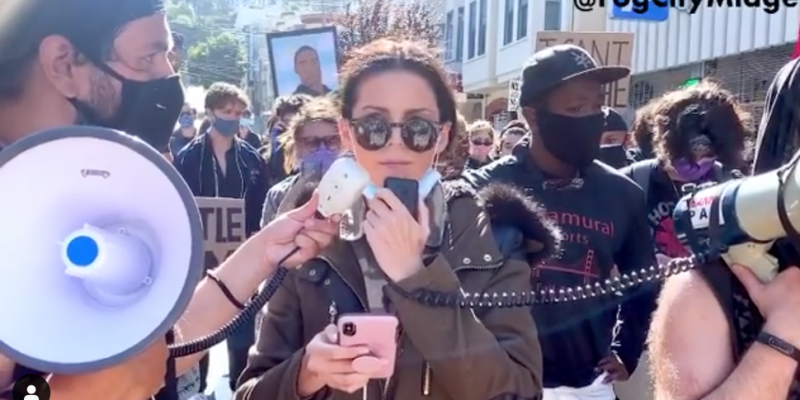 The enemy has craftily chosen its words to make it racist to not support Black Lives Matter. It is a shame that we as decent adults have to say that yes, black lives matter. Of course they do, why should we continue to say healthy grass is green when everyone knows it. But no, not all Americans support the Black Lives Matter movement—note the capital letters—which deals in corruption and cowardly concealment behind well-meaning Americans who are demanding change from their own communities and from any leaders who fail them.

Now that we’ve said black lives matter, now that we’ve gotten that obvious tenant of humanity out of the way, I’ll start with this: The end of the story is that the protestors applaud her.

They applaud her, a white woman standing in the middle of a protest reading statistics from The Washington Post.

Sometimes it pays to risk being called a racist by the mob in order to offer some perspective to Americans who crave something different, something wholesome, something permanent.

When one of the protestors asked if anyone else wanted the microphone, Midge stepped up.

She proceeded to read a few statistics to the crowd about violent crime that contradict the BLM narrative, which is stoked by a healthy source of funding and the supporting mainstream media narrative.

“I was so nervous but I tried to bring some perspective and ease tensions!” Midge would eventually write after the experience.

“I wanted to read something that I read that was so crazy from The Washington Post,” she said at the protest.

“Eighty-nine police were killed last year in the line of duty. And [27] people last weekend were killed in Chicago.”

“We need justice for George Floyd,” Midge closed. “We also need to stop violence against one another.”

After a second or two of relative silence, one where a couple of voices can be heard saying “Yeah, yeah,” the crowd followed and applauded her.

Perhaps one of the facts Americans are being distracted from is the one where, of the 41 unarmed arrests-turned fatal, 13 of those were suffered by individuals of a race other than black and white. That’s almost a third.

Mere days after the videoing of George Floyd’s murder almost three weeks ago, all four officers at the scene in the arrest were fired, investigations from the FBI and state law enforcement were opened, and the officer at the center of the incident—Derek Chauvin—was taken into custody and charged with second-degree murder. The three other officers have since been charged as well.