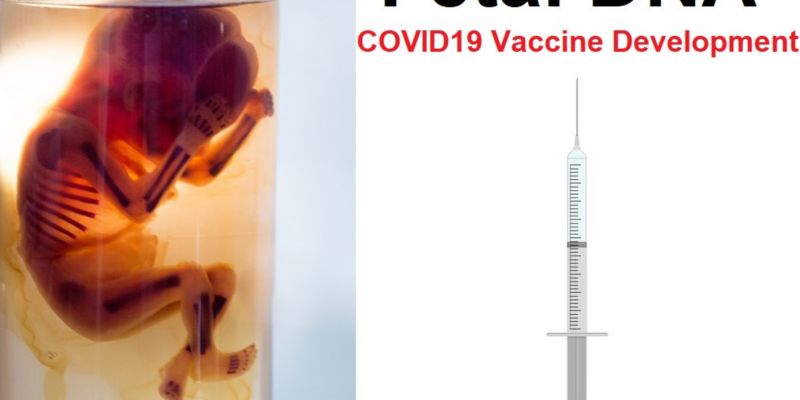 Three companies on the short list to receive $1.7 billion in taxpayer money for their work in developing a coronavirus vaccine use cells from aborted babies, according to a report by Science Magazine.

Roman Catholic leaders and members of Congress have asked President Donald J. Trump, and the heads of several of his agencies, not to fund vaccines that use aborted fetal tissue. According to Science Magazine, those requests have fallen on deaf ears.

Aborted fetal tissue dating to the 1960s has been widely used in the development of vaccines and treatment for diseases, including FDA-approved drugs for hemophilia, rheumatoid arthritis, and cystic fibrosis. According to the Centers for Disease Control, there are at least 27 vaccines that use cells from aborted babies.

Newsweek reports that “decades-old fetal cell lines are already used to make a number of common vaccines, including against chickenpox, shingles, Hepatitis A and Rubella. A cell line is the term used to describe a culture of animal cells, in this case taken from fetuses, that can be cultivated repeatedly in a lab. The relatively common technique sees viruses grown in the cells, as the bugs aren’t alive and need a host to replicate.”

According to Science Magazine, coronavirus vaccines being developed by CanSino Biologics, Inc. and the Beijing Institute of Biotechnology, the University of Oxford and AstraZeneca, and the University of Pittsburgh, are using the fetal kidney cell line HEK-293 from a baby aborted in 1972. Janssen Research & Development USA, a Johnson & Johnson subsidiary, is using PER.c6, a retinal cell line from a baby aborted in 1985.

If the babies, whose cells have been used for decades for medical research had not been “terminated” or “aborted,” they would be 48 and 35-years-old today, respectively. Instead, research companies, medical schools and institutes, have received millions of dollars in funding to experiment on them. It is unlikely the parents of these aborted babies received payment for the use of these cells or a percentage of the millions of dollars in funding the researchers received.

Roman Catholic bishops wrote a letter to the U.S. Food and Drug Administration urging it to “ensure that Americans have access to vaccines that are free from any connection to abortion.”

In April, 120 Republican U.S. House members sent a letter to Trump arguing that “there is no urgent, scientific need for aborted fetal tissue.” The group urged the president to redirect funding towards ethical, successful alternatives to combat COVID-19. Thirty-five U.S. senators sent a similar letter with a similar request to the president on the same day.

Texas Roman Catholic Bishop Joseph E. Strickland wrote a letter to the members of the Diocese of Tyler, Texas, urging them to oppose this practice. He wrote:

“Many Christians in our society, Protestant, Orthodox and Catholic alike, are too willing to allow an unborn child to be killed simply because they believe the unborn child’s death will somehow improve their lives. Tragically, people are not aware of or have chosen to turn a blind eye to the advances in medical science that allow vaccines to be developed with the wholesale use of aborted children’s bodies.

“Just because the crime of abortion is considered legal in our nation does not mean it is morally permissible to use the dead bodies of these children” to help build peoples’ immune systems to the coronavirus, he adds.

The bishops’ letters appear to contradict a 2017 Vatican’s Academy for Life document that argues Roman Catholics can “with a clear conscience” take rubella, chickenpox, polio and hepatitis A vaccines that use fetal cell lines from the 1960s.

The document states: “All clinically recommended vaccinations can be used with a clear conscience and that the use of such vaccines does not signify some sort of cooperation with voluntary abortion.”

Andrea Gambotto, lead researcher at the University of Pittsburgh, explained to Science Magazine that human cells are better than animal cells for effective vaccines. He said, “Cultured [nonhuman] animal cells can produce the same proteins, but they would be decorated with different sugar molecules, which—in the case of vaccines—runs the risk of failing to evoke a robust and specific immune response.”

There are more than 130 coronavirus candidate vaccines, according to the World Health Organization; 10 had entered human trials as of 2 June, Science Magazine reports.

At least five of them use one of two human fetal cell lines, according to Science Magazine: “HEK-293, a kidney cell line widely used in research and industry that comes from a fetus aborted in about 1972; and PER.C6, a proprietary cell line owned by Janssen, a subsidiary of Johnson & Johnson, developed from retinal cells from an 18-week-old fetus aborted in 1985. Both cell lines were developed in the lab of molecular biologist Alex van der Eb at Leiden University.”

Science Magazine also lists which vaccines have potential for federal funding, which ones have entered into human trials, and which ones use fetal tissue cells.

James L. Sherley, M.D., Ph.D., and David Prentice, Ph.D., write in a in a paper published by the Charlotte Lozier Institute:

“The use of cells from electively aborted fetuses for vaccine production makes these five COVID-19 vaccine programs unethical, because they exploit the innocent human beings who were aborted. While some may see no ethical problem, for many a straight line can be drawn from the ending of a human life in an abortion to a vaccine or drug created using cells derived from the harvesting of the fetal tissue.

“Even if the cells have been propagated for years in the laboratory far removed from the abortion, that connection line remains.  Thus, use of such cells for vaccine production raises problems of conscience for anyone who might be offered that vaccine and is aware of its lineage.

“Moreover, the possibility of conscientious objection by those to whom a vaccine is offered creates ethical demands on the policymakers, healthcare officials, scientists, vaccine creators and funders, whether or not they themselves have an ethical concern, because of the question of access to the vaccine by the entire citizenry in good conscience.  This is especially true if alternative production methods and vaccines are possible for which there is no ethical question.”

In 2018, the Trump administration created a $20 million grant to invest in ethical medical research practices that do not use aborted baby tissue, and in 2019, banned taxpayer funding of extramural fetal tissue research projects.

Despite this, Janssen, the University of Oxford AstraZeneca, and a Chinese company working with Canada’s National Research Council, are on the shortlist to receive up to $1.7 billion in federal funding for vaccines they are working on that use cells from aborted babies, Science Magazine reports.

Interested in more national news? We've got you covered! See More National News
Previous Article “Nervous” Conservative Activist States Statistics in Middle of BLM Protest
Next Article You Will Be Made To Care, Raising Canes Edition