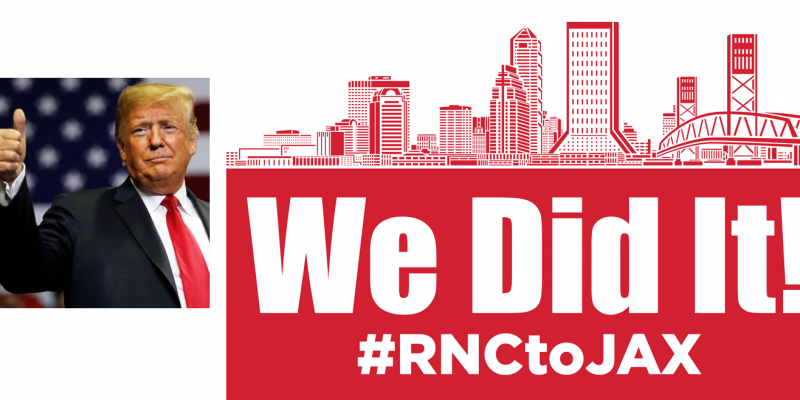 While the original location of Charlotte is one of the most liberal cities in North Carolina, a new site of the Republican National Convention is a different story.

Jacksonville, Fla., now home to the ceremonial aspects of the national GOP convention this summer, is among the most conservative large cities in the U.S.

Contractual obligations keep only official business at the Spectrum Center in Charlotte, and liberal leaders in that city do not seem phased. However Florida Gov. Rick Scott took to Twitter to say “I’m biased, but this is a great choice!”

“The state of Florida and the city of Jacksonville are ready and excited to host President @realDonaldTrump for the fun part of the Republican Convention. It’s the first step towards a big win in November!

Previously, Democratic North Carolina Governor Roy Cooper indicated he was concerned a convention the size of the RNC should not be held due to COVID-19 restrictions and precautions. He rejected President Trump’s demand that the convention be allowed to take place Aug. 24-27 without restrictions.

RNC has about 70 days to get the convention partially moved and the Charlotte convention restructured for a smaller delegate size. Jacksonville has a population of 1.5 million and hotels are already being blocked off to accommodate the swell of expected guests which included not only delegates and alternates and their guests, but also lobbyists, VIPs, protesters, etc.

On Wednesday, the Republican National Committee voted to allow six Delegates from each state and territory (for a total of 336) to nominate the President and Vice President and vote on all other Convention business. Each Delegate and Alternate was allowed to bring one guest. Furthermore, all committees except Credentials will not meet for 2020, meaning that the 2018 Platform will likely carry through 2024, as well as party rules.

From the hip: Florida has 29 electoral votes up for grabs in November. While hosting a convention in a more liberal state makes sense from an evangelistic standpoint, moving “the fun part” to Republican-leaning Jacksonville under a popular Republican state governor can only help to electrify the GOP voter base. This is a solid move, especially given the recent smaller convention size.

While Florida is known for being a swing state or battleground during elections, Jacksonville is the fifth most conservative city in the U.S., according to Forbes Magazine in an analysis of the 10 most conservative and liberal cities based on data from The Economist and MIT.

Much friendlier turf. The enthusiasm will show on camera.

_________________
UPDATE: Edits made to reflect that Charlotte will retain official convention business. Minor corrections made.

Interested in more national news? We've got you covered! See More National News
Previous Article You Will Be Made To Care, Raising Canes Edition
Next Article Texas leads U.S. in oil and gas bankruptcies, job losses are a ‘bloodbath’