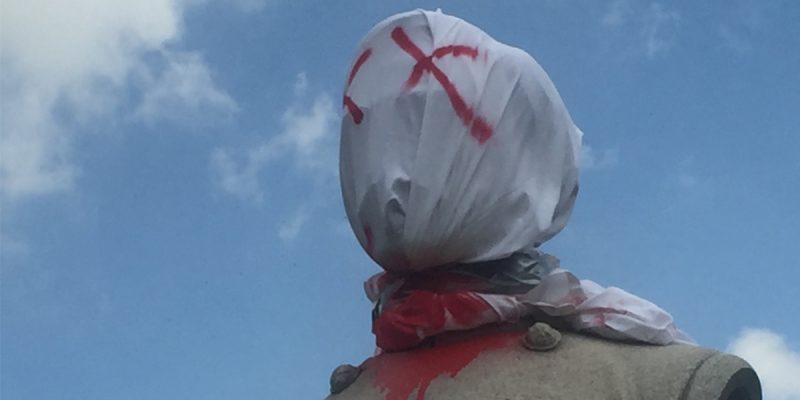 Take Em Down NOLA threatened the city government of New Orleans to remove historic monuments before July 1, and less than two weeks later, two monuments were toppled and at least three were vandalized. Unidentified people pulled the 1898 Attilio Piccirilli monument of John McDonogh from its base in Lafayette Square and the 1922 Albert Weiblen bust of Colonel Charles D. Dreux off its base on N. Jefferson Davis Parkway either Thursday night or Friday morning. The 1988 Enrique Alferez monument to Sophie B. Wright was heavily vandalized as well, and in days prior, vandals damaged and graffitied a monument to Albert Pike and the Dreux monument.

Sophie B. Wright was a New Orleans educator who overcame physical handicap from an accident at the age of three. At the time of her death, Wright was described as a saint and the Picayune wrote that she was “the best-known and best-beloved woman in the South.” Wright had also been awarded the Picayune’s Loving Cup. New Orleanian Col. Dreux served as District Attorney and in the Louisiana legislature before The War Between The States began, and he was the first Confederate officer killed in battle. According to New Orleans historian Grace King, Dreux’s friends described him “as a man of great personal magnetism; brilliant, eloquent, dashing.” Philanthropist John McDonogh donated substantial amounts of money to fund Orleans Parish Public schools.

These coordinated actions were partially reminiscent of the German Kristallnacht, or the Night of Broken Glass, in which Nazis smashed the windows of Jewish-owned homes, stores, buildings, and synagogues. It was Take Em Down’s version of targeted destruction, a Monumentale Nacht, and like the Nazis, these extremists get protected by media.

The local newspaper The Advocate posted a story Friday morning with absolutely no mention of Take Em Down’s recent threats. The Advocate along with other television stations in New Orleans continually covered Take Em Down’s threat to the city’s elected officials, yet the media appears to be covering any of that from association with the Monumentale Nacht. Take Em Down’s list has Pike at #1, Dreux at #3, Wright at #5, and McDonogh at #7.

On June 29, Take Em Down posted on their social media a message which ended: “The city of New Orleans has two more days to take action, or the people will have to take it all into our own hands.”

On June 30 the group made several posts which included: “Today is the last day. | These monuments celebrate terror to Black lives & humanity at large. Don’t speak to us about how upset you are to lose your statues, when we are out here LITERALLY fighting to save our lives. These monuments don’t teach history, they “celebrate”, honor & venerate terror & they need to go!!! Now!!!”

“Therefore, if the city is not moving fast enough, the people have to step into the fullness of our own leadership all over the city and help move our city forward. No conversations. No announcements, only action!”

On July 1, Take Em Down posted: “Details & specific timelines with immediacy are necessary, and therefore since those are not what we have, the people must just do what we need to do. No announcements. Just action!”

New Orleans mayor LaToya Cantrell has stated that the city will not tolerate such desecrations of publicly owned property. Cantrell said just last month that she “rejects vandalism and destruction of City property. It is unlawful.” Yet she has done nothing to combat it and continues to pacify Take Em Down NOLA.

The New Orleans media, specifically The Advocate/Nola.com, has no balance. The reporters are nothing more than journo-activists. These reporters gush over every Alt Left action or congregation. This week alone, The Advocate “doxxed” a family then covered up for a crime.

On Tuesday, they reported on “Racist messages spray-painted on a fence outside a Metairie teacher’s home.” “The school where the teacher worked, Kehoe-France, announced Tuesday it had fired her, but officials did not identify her. However, Jefferson Parish property records listed the owner of the home as <omitted>, who described herself on her Facebook page as a Kehoe-France teacher beginning last year.”

The news outlet identified the property owners and her employer and put a private citizen’s name out to further attract negative attention. The female teacher lost her job. This is not journalism. It’s activism.

The reporters Ramon Vargas and Faimon Roberts wrote extensively about the vandalism on private property in Metairie on Tuesday. Then, on Thursday, The Advocate reported on the vandalism of the Albert Pike monument on Tulane Ave. and South Jefferson Davis Parkway.

Fake News writing such as “show signs of protest” when it is clearly vandalism is why Americans distrust the media. Then these Fake Newsers think so little of their readers they entirely ignore the perfectly visible “DIE PIG” graffiti as if they think people are too stupid to notice. The hood over the head of Pike has concrete in it to further damage the memorial. The Advocate never mentioned vandalism in its story. It was simply “signs of protest.” They failed to mention what protest, as in, if it was signs of a protest, the “media outlet” should explain who was protesting and what they were protesting.

Look at the clowns they employ and how they truly feel and interact on social media. Bryn Stole, while on the beat during the protest outside of Jackson Square, tweeted: “Gonna bike around for a bit. Folks hanging out on street corners in the Quarter on a humid Friday night; getting beer from corner markets (bars all closed); three white dudes in vests at gate to square talking about defending statue from “antifa”; couple dozen folks watching them.”

Nothing says professionalism like a reporter on the job writing “whites dudes.” Except maybe his snarky tweet: “We shall see if Old Hickory can survive without these vigilant defenders here to protect him.” That was about a few individuals counter-protesting Bryn’s apparent Alt Left heroes.

The local media has gone full on Fake News. They’re complicit with criminals and writing stories to cover for criminal actions such as reporting vandalism of a public monument as signs of a fictitious protest. Everyone with a subscription should seriously reconsider their financial support of such preposterous, biased reporting.