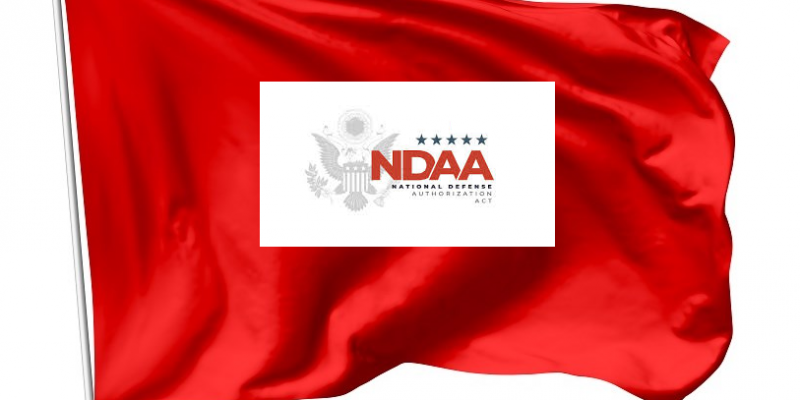 A red flag law that could be imposed on members of the U.S. military and their dependents is now one Congressional compromise away.

As the Democratic-controlled U.S. House of Representatives and the Republican-dominated U.S. Senate passed their versions of a $741 billion defense spending bill, several provisions were bird-dogged by the Trump Administration as objectionable.

Among them was the expected opposition to a superfluous “diversity and inclusion” section in the House version and re-naming of military bases which honor Confederate heroes in both the House and the Senate versions. These received plenty of media attention.

But what went largely unseen was the House bill’s red flag provision. Section 542 of the House’s version of the National Defense Authorization Act (H.R. 6395) gives authority for military judges and magistrates to issue ex parte protective orders whenever they deem a person is unfit to own or carry a firearm.

The Donald Trump Administration opposes the section as it “would strain the military justice system’s limited resources and greatly expand the authority of military judges into an area reserved to civil courts” in a way that “represent a major expansion of the portion of the Gun Control Act of 1968.”

Commanding officers, the White House statement noted, already have the authority to issue protective orders for service members and dependents in appropriate circumstances.

But “if enacted, this provision would likely result in a significant expansion of the military justice system’s caseload, for which the system does not have adequate personnel, thereby producing undesirable systemic delays, including in sexual assault cases,” the statement read.

Aidan Johnston, Director of Federal Affairs for Gun Owners of America, called it a case of House Republicans being “asleep at the wheel.” Johnston pointed out the bill, along with the red flag section, passed unanimously in committee. On Tuesday evening the House bill was approved on the floor by a 295-125 veto-proof majority. Fully 108 House Republicans voted for it, with 81 opposed, and 9 not voting.

“Understood in context, Section 542 of the [House] bill codified a new ‘red flag’ gun confiscation order program enforceable against any person subject to the United States Code of Military Justice — meaning both active duty military and retirees, among others,” Johnston wrote. “Because these would be issued on an ex parte basis, the gun owner would get no notice, no attorney, and no ability to defend himself against the accusations — in short, no due process.”

While Democrats control the House (and appoint committee members), this bill still must make it through conferencing with a Republican-controlled Senate and negotiations including White House staff. Both chambers must agree on a single compromise bill before it can be sent to the President for his signature or veto.

It has a tough road ahead, with nearly 60 objections in the White House statement alone. However, it appears the Senate bucked the Trump Administration on several provisions including the Confederate-named bases and planned Space Force rocket launches. It’s enough to warrant a veto, which could be overridden if each chamber maintains the two-thirds support threshold.

Back to the red flag provision: was this a case of the 1,427-page bill not being thoroughly vetted by House Republicans and barely researched before passage? Perhaps, though very unlikely given the importance of the legislation.

The more likely situation here is that with so many other provisions taking the limelight, and the slim chances of a red flag element of the bill being OK’d by the Senate, this was not a battle House Republicans chose to fight.

Case in point: U.S. Rep. Mac Thornberry (R-Texas), a ranking member of the House Armed Services committee not seeking re-election. Thornberry, for whom this year’s NDAA bill is named as an honorarium, said in a statement “While I don’t agree with everything in this bill, we have many opportunities ahead of us to continue perfecting it and I am pleased to support it.”

As Democrats were poised to cut $73 billion out of the defense budget via an amendment, Republicans were busy doing everything they could to preserve as much funding as they could in the House bill. Undoubtedly, this consumed much of the oxygen in the lower chamber.

Another reason for a lack of resistance to a red flag bill is that GOP leaders are not universally opposed to red flag laws, though they tend to prefer state action.

All eyes are now on the White House, with an increasing amount of calls for a veto and for Congress to pull the red flag section coming from gun rights organizations.