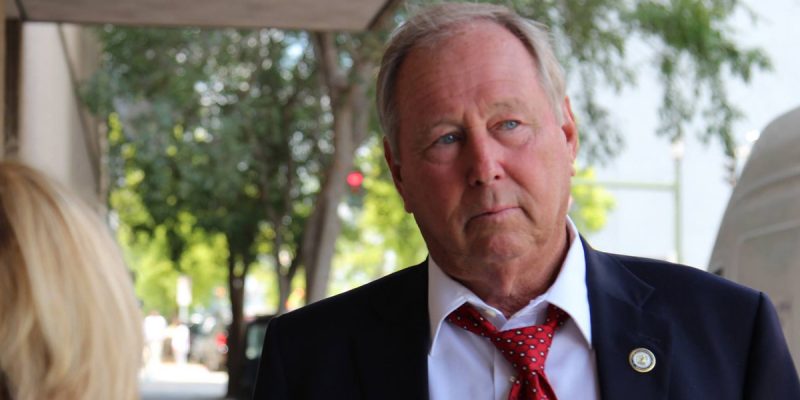 This happened at the last minute on Friday, and it came completely out of the blue, but when Steve Carter jumped in and qualified for the mayor-president’s race in Baton Rouge it might have been the biggest splash in state politics.

People haven’t quite given the Baton Rouge mayor’s race the attention it’s due so far, mostly because until Carter entered the fray the race lacked definition. And on the Republican side too many people just assumed Sharon Weston Broome couldn’t lose.

That’s a false assumption. We’ve talked about it a little here at The Hayride, but it ought to be remembered that Broome only beat Bodi White by a relatively small margin four years ago. She managed 52 percent of the electorate and bested White by just 4,200 votes. To do that, Broome managed 25 percent of the white vote in East Baton Rouge Parish.

There were some problems with White’s campaign. Chief among them was that Bodi, who has been an excellent state senator and would have been a highly competent mayor, is a legendarily lousy public speaker. Another problem was cultural – not only isn’t he much of an orator but he “sounds country.” And upscale white voters in places like Bocage and Southdowns, most of whom aren’t very ideological or who might even lean to the left, were turned off at the idea of having, in their perception, a bumpkin from the sticks running Louisiana’s capital city. They opted for Broome instead.

And what they’ve gotten out of that choice has been four years of rapid decline, nonstop race-baiting by the mayor’s pals, businesses moving out of Baton Rouge, never-ending demands for tax increases, worsening schools, a police department in complete free-fall and a murder rate which rivals larger cities with worse reputations. Baton Rouge is sliding off a cliff at the bottom of which is Jackson, Mississippi.

People in Southdowns and Bocage know this and they don’t want to vote for it again, generally speaking.

But the perception has been that Republicans don’t have a candidate who can fix it.

That isn’t a shot at either Matt Watson or Jordan Piazza, the two Republicans who have been in the race for weeks or months. Watson has put in his time as a member of the Metro Council and he’s put forth an agenda which makes a lot of sense – changing the focus of the mayor-president’s office toward handling the technocratic, non-ideological things which need to be done in the parish rather than attempting to push social change as Broome constantly does. Piazza brings a business mindset as well as a connection to Baton Rouge’s roots, given that his family are the Piazzas of Phil’s Oyster Bar fame.

But neither one has managed to get over the hump with respect to name recognition or ignited a large section of the electorate behind his approach.

Carter, on the other hand, has been a name brand in Baton Rouge politics for a long time. He served 12 years as a state representative and made a name for himself as an advocate for school choice, something which resonates across the political board in Baton Rouge owing to the deficiency of the local school system. He’s also been a major advocate for road construction, even falling off the conservative wagon to push for gas tax increases in pursuit of a new bridge across the Mississippi. That might make him somewhat less than perfect from a low-tax, small-government perspective, but on the other hand it does show that Carter is in touch with things that make voters tick in this town.

Baton Rouge has never been much of a conservative paradise, though there was a time when social conservatism was a winner here. This is a place where a minimalist approach to government will get you a minimalist share of the vote, and so it’s unrealistic to ask Republican candidates to have pure ideological pedigrees.

Given that, Carter is about as accomplished a conservative as you’ll ever expect in a Baton Rouge mayor. His career record on the LABI legislative scorecard is quite solid; in his first legislative term from 2008-11, he boasted an 85 percent LABI score; in his second, from 2012-15 he was a 78, and in his third term from 2016-19 he earned an 86 rating. On the Louisiana Family Forum’s scorecards, he tended to hover around 70 percent, making him a middle-of-the-pack House member.

That makes Carter a tailor-made candidate for the pro-business, socially-moderate upscale voter. He’s acceptable for hard-core conservatives and he’s moderate enough that white Democrats, particularly LSU faculty members and/or state workers, could vote for him. And with universal name recognition in Baton Rouge Carter instantly becomes the favorite on the Republican side.

The fact Carter is plausible all but wipes out Tara Wicker’s path to victory. Wicker, a black Democrat who has positioned herself as friendly to white voters and worthy of support from the business community, was hoping to push a narrative that none of the white Republican candidates could win and therefore she would be the realistic choice to beat Broome with white support. Her camp has been making fundraising calls in the business community with that pitch, and making a little headway thanks to the perception that Watson and Piazza lack the heft to get further than White did four years ago. But with Carter, who next to Broome is the biggest name in the race, you can’t really sell the business community and Republicans on the impossibility of a white mayor. Whether Carter can get above 50 percent in a runoff or not is unknown, but it’s certainly plausible, or at least more so than with Watson or Piazza as the candidate.

And with Wicker’s path to victory greatly obscured, that means Broome’s number one internal Democrat threat is to her left. Denise Marcelle has a machine and a personal following, and she is the local patron saint of the Black Lives Matter movement. That wasn’t enough to vault her over Broome in 2016, but the dynamics of that race were different. Broome was what Tara Wicker is four years ago. She was the friendlier black candidate who could pull some crossover support, and so the perception in the black community was that she was the one more likely to win.

If Wicker stays in the race, though, Broome has to run to the left to knock Marcelle out, or else the Black Lives Matter crowd, which is bigger now than it was four years ago, could well be her undoing. And while that might be a good strategy to get to the runoff it perfectly positions Carter to steal some voters from Broome out of Wicker’s camp. Middle-class black voters and white Democrats could well find themselves more comfortable with Carter than with a Sharon Weston Broome who has struggled to govern in her first term and is re-casting herself as a radical leftist in order to placate Marcelle’s voters.

And don’t make the mistake of thinking that a white candidate with appeal to middle-class black voters and a message of growth and prosperity is a non-starter in a place used to electing black Democrats. We just saw that assumption blown away earlier this month in Monroe, when three-term incumbent Jamie Mayo, once thought impregnable in that city, got himself torched by 14 points by Friday Ellis, a white businessman running as an independent in a city where 62 percent of the registered voters are black. Ellis perhaps has a little more of a new-car smell to him than Carter, but he also wasn’t the established name Carter is.

Nothing is guaranteed here. But Carter getting into the race means an established, trusted name with a statewide fundraising reach is now running for mayor of Baton Rouge and there is a real chance that he could win.

Interested in more national news? We've got you covered! See More National News
Previous Article Critics: Changing information about coronavirus transmission, impact leads to backlash over policy decisions
Next Article WAGUESPACK: What’s The Plan To Get Louisiana Back To Normal?