It was on Saturday, July 11, that Louisiana Gov. John Bel Edwards took to the airwaves to announce that all over Louisiana he was imposing a mandate that people would have to wear a face mask in public places, and that all of the state’s bars would be forced to close. That edict would go into effect on Monday, July 13.

Since that time Edwards has taken away operating licenses from at least four establishments for the sin of insufficiently suiciding their businesses, and he has resorted to regularly scolding the state’s citizens not just for insufficiently adhering to his commands but for the further sin of questioning his evidentiary basis for them. As sheriffs and other first responders in more than a half-dozen parishes have pointed out discrepancies in COVID-19 case counts Edwards has railed against “disinformation” and accusing them of not caring about COVID-19. 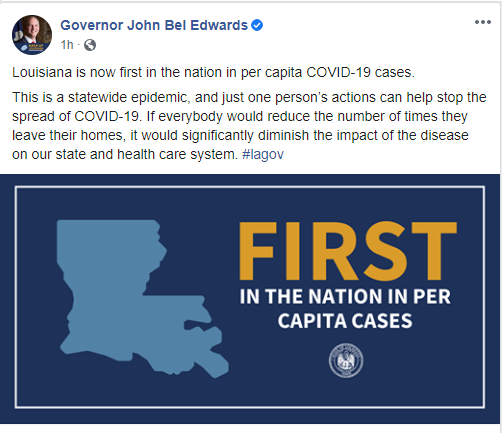 Gosh, that doesn’t sound so good.

We’ve seen this before. Almost three months ago California imposed a mask mandate even more stringent than the one Edwards saddled Louisianans with, and that state saw a COVID case spike over more than 250 percent.

One would be entitled to see this as evidence that mask mandates don’t work.

They don’t work either because the cloth diapers people are wearing over their mouths don’t stop them from breathing in viruses (or breathing them out past the mask, in the case of those infected but not quarantining), or because people don’t follow the mandate or don’t practice proper mask etiquette.

Noncompliance is a factor in the success of a governmental mandate, you know. You can mandate that nobody should rob or kill or cheat on their spouse, and shockingly those things still happen. Those kinds of mandates are grounded in the basic tenets of our morality and they still don’t get as much compliance as you’d hope.

Then there are unrealistic mandates. Mandating to people that they wear an uncomfortable, more-or-less worthless piece of cloth over their faces when they go out, without making much of a case at all that it will actually do any good to do so, is a bit like mandating that everybody should go out and make a million dollars. You can order them to do it, but that doesn’t mean it’ll happen.

Edwards has had two weeks and change to test out his mask mandate and it’s an abysmal failure. All he’s done is find one more thing Louisiana is last in. Just as the politicians and bureaucrats in California did, he’s busily blaming the people of Louisiana for his own failure – bitching that people are insufficiently following his edict and that’s why it hasn’t worked.

When the real truth is COVID-19 is a coronavirus, and a coronavirus will ultimately go everywhere. We’re all going to be exposed to it eventually.

Edwards’ focus has been wrong from the start. He saw this virus as an opportunity to put the leadership style he learned as a company commander in the Army to use on a state of 4.6 million people. Edwards took direction from the White House’s COVID-19 task force, which is made up of the same public health bureaucrats who have bungled things from the very beginning, and has dutifully imposed that direction on 4.6 million free American citizens without even really bothering to ask for buy-in from them.

That’s a military middle-management leadership style – pass orders through from headquarters, and come down heavy on the people who don’t snap to attention. Throw in Edwards’ modus operandi as a trial lawyer, which involves making draconian threats aimed at intimidating others into settling with him, and you have his COVID-19 response in a neat little box.

And it has generated, by his own admission and by his own standards, the worst results in America.

Of course, Louisiana’s case count numbers are as much a function of testing as anything else. According to the White House COVID-19 task force’s Monday report, Louisiana has tested at a rate of 2,205 per 100,000 population, while the national average is 1,657 per 100,000. Test 30 percent more than the average and you’re probably going to find 30 percent more positive cases than the average.

It’s failure. You can’t call it anything else.

The question is how much longer the people of Louisiana are going to continue to politely follow this man’s directives and allow him to set the state’s economy aflame in the name of a virus response which isn’t effective in slowing the virus. He’s failing, by his own metrics, and as he won’t stop scolding us, we’re failing along with him.

Wear your mask, stay home, go broke, watch your kids miss out on an education and a future. And watch those case counts continue to escalate.

Interested in more news from Louisiana? We've got you covered! See More Louisiana News
Previous Article Early voting extended in Texas for Nov. 3 election
Next Article To lighten the mood of the day– mini AOC has great insight [video]