The events of the past three days have made it quite clear that John Bel Edwards, who is the least powerful governor in Louisiana’s modern times with respect to his ability to make and implement public policy in regular order, is well ahead of his skis with respect to COVID-19.

On Saturday, Edwards announced a statewide mask mandate, claiming that the increases in COVID-19 case counts and hospitalizations have put the state in a position by which its healthcare systems might be overloaded.

There were just more than 1,200 people in hospitals testing positive for the virus when Edwards made the statement. Yesterday’s release by the Louisiana Department of Health indicated the number is currently 1,308.

Our sources tell us there are multiple irregularities with respect to how COVID-19 hospitalizations are tabulated. Most specifically, that everyone who checks into a hospital is tested for the virus, and if they test positive for it they’re put down as a COVID hospitalization. If they’re on Medicaid the hospital draws down federal funding which makes them something of a cash cow.

This matters, because for three months at the beginning of the current crisis, hospitals weren’t taking patients for “elective” surgery. That decision killed an untold number of cancer and heart patients and others who weren’t able to access hospitals for treatments. It also put a large number of hospital staffers out of their jobs and put the healthcare system in a bad financial way. But those restrictions no longer exist, and so patients whose medical needs were neglected are now returning to hospitals for needed treatments. The hospitals therefore are naturally going to fill up to some extent, and some of those patients will naturally be positive for the virus – though not necessarily symptomatic in any way.

In any event, Louisiana has more than 15,000 staffed hospital beds, according to the American Hospital Directory. At the peak of the COVID-19 emergency there were some 2,600 people marked as COVID hospitalizations. Louisiana is nowhere near a point by which it will run out of hospital beds.

Edwards’ mask mandate also contained an edict shutting down all of the state’s bars, because the governor claims it’s young people hanging out in bars who have caused the virus to spread. He didn’t elaborate on his evidence for this, but what Edwards did not do was to close the casinos at which much of the same types of activities are happening.

Yesterday, the state released numbers indicating that over 18,000 COVID tests had been performed, and those generated some 1,700 new cases of COVID-19. Our sources tell us that there is a good bit of duplication in those tests – someone who tests positive gets sent home from their job, and must test negative in order to return to work. So they continue being tested, and every positive could well be marked down as a “new” COVID case based on the state’s sloppy record-keeping.

Additionally, there are now offers of free benefits to people who show up at COVID testing sites. At Alex Box Stadium on the LSU campus in Baton Rouge, they’re giving away McDonald’s gift cards. Reports of free food and store gift cards have been quite ubiquitous since the state began ramping up testing. 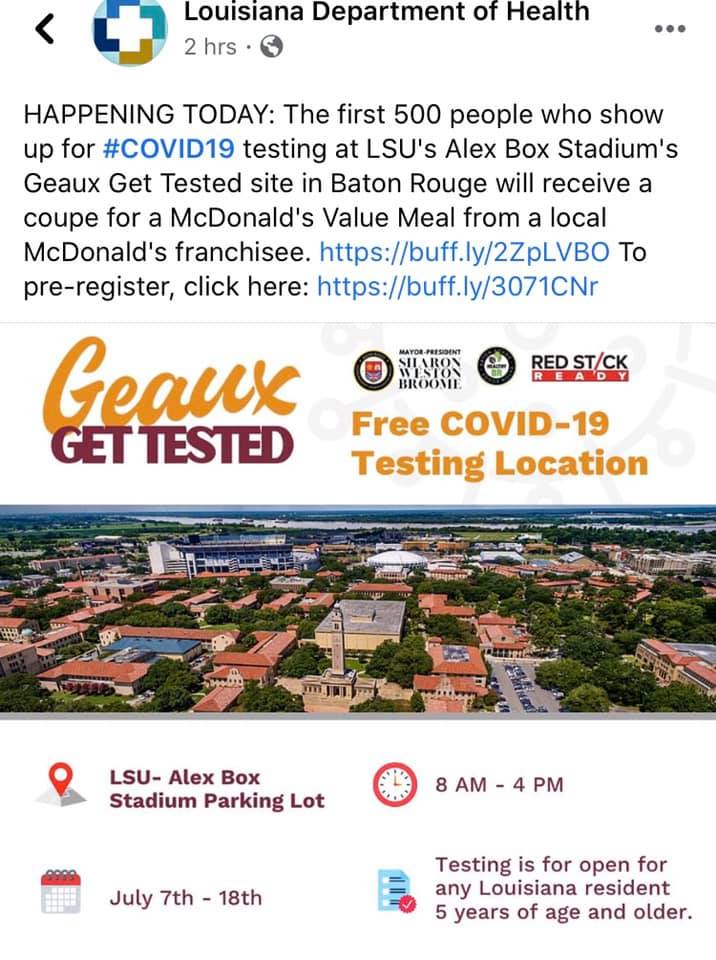 Edwards set a goal for the state to test 200,000 people per month starting in May. In June the state performed 385,000 tests. The state is on pace in July to perform more than half a million tests. And with that volume he’s crowing about case counts.

Those tests are not free, by the way. They represent a sizable expense of your tax dollars, and they’re contracted with private testing facilities. Ramping up from 200,000 tests to 500,000 represents a very, very lucrative honey pot for the testing labs.

The Louisiana Department of Health reported seven new COVID deaths in yesterday’s update. More people than that were murdered in the same time frame.

Then yesterday, the Louisiana High School Athletic Association dropped a bombshell on the state’s athletes and parents…

LHSAA will not allow high school football games to be played until Louisiana reaches phase 4 of K-12 re-opening.

Unclear how quickly that phase can be attained. Dependent on statewide COVID-19 numbers. @WAFB pic.twitter.com/Cx0VRymNEx

“Phase 4” doesn’t exist. “Phase 4” means Louisiana completely goes back to normal, which Edwards has claimed will not happen until there is a vaccine.

The medical community has pretty consistently said that there is no virological justification not to have the kids back in school. People under 18 are under zero threat to suffer major medical consequences from contracting COVID-19; in fact, it is a critical element of generating herd immunity that they do get it; the vast majority of kids will never show symptoms. The risk would be that the kids might spread the virus to their grandparents, but that’s a risk individual families are best suited to mitigate.

COVID policy in Louisiana has become an abject disaster which will make it impossible for the state’s descending economy to pull out of its current tailspin, and destroy the livelihoods and home lives of families from Shongaloo to Dulac. There is no light at the end of this current tunnel, and there is no current leadership offering assurances even that they will push for a return to normality.

The only current option is for a majority of members of the Louisiana House of Representatives to sign the petition which has circulated for two months which would cancel Edwards’ COVID-19 emergency declaration. Doing so wouldn’t stop local governments from whatever emergency measures they’re declaring, but it would stop the statewide lockdown.

We’re told House Speaker Clay Schexnayder is demanding that no one else sign the petition, which we’re told is just six to eight names short of a majority. Schexnayder is making a colossal mistake in standing against it. What he should have done long ago is to encourage everyone in the House to sign it, get a majority and then hold it over Edwards’ head to leverage a seat at the table when Edwards insists on making rash, tyrannical decisions which kill the state’s economy. You’ve certainly heard by now that K-Paul’s Louisiana Kitchen, once New Orleans’ finest restaurant founded by the great Paul Prudhomme, is closing for good due to the coronavirus lockdown; it’s just a higher-profile example of thousands of businesses which can’t survive the current orgy of bad public policy emanating from our leadership.

Those closures are on Edwards, but they are also on Schexnayder, who believes that federal funding would be made forfeit if the emergency were to go away. The state’s congressional delegation has looked into that question and didn’t find much support for it, but even were that true Louisiana already received $1.8 billion in federal COVID funds. We are not short of federal money. What we are short of is economic activity, as our businesses and jobs evaporate.

Continuing to stand against the final half-dozen or so signatures on that petition means that Clay Schexnayder is responsible for what economic damage occurs going forward. Louisiana cannot get through this epidemic and reach herd immunity without taking steps to allow it to run its course. We already know that healthy people are not at significant risk from COVID-19, and yet Edwards insists on locking them down.

It’s time for that petition to be signed by a majority of House members and turned in. It’s time for Louisiana to fight its way through COVID-19 and stop running from it.

It’s time for leadership. And since Edwards won’t offer any, the House must lead. We will never return to normal if they don’t.

Interested in more news from Louisiana? We've got you covered! See More Louisiana News
Previous Article American Academy of Pediatrics urges local governments to reopen schools
Next Article The Advocate Wants You To Turn Off Your AC Amid A Heat Wave