Here’s a screenshot of a story in the Washington Post which really brings out, in technicolor, the concern that American corporate media could be influenced if not controlled by China. 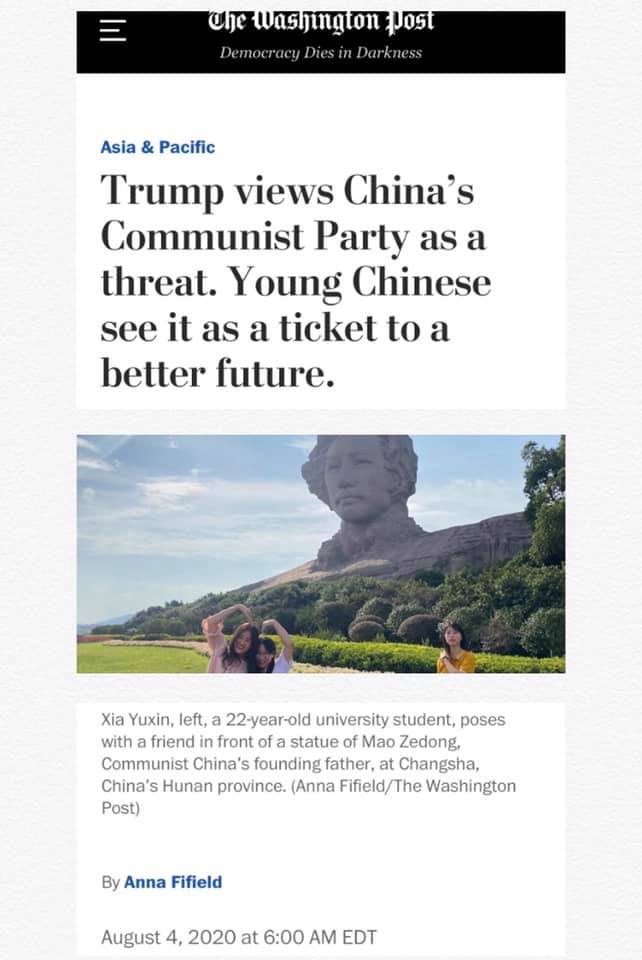 The story, which we won’t link to, is straight-up Chinese Communist Party propaganda. It’s anything but the first time the Washington Post has made itself a news organ for the CCP, and the New York Times is every bit as guilty.

Tomorrow morning, I’m due to appear on the Dan Proft radio show on 560 The Answer in Chicago to talk about a piece I wrote for The American Spectator last week about this subject entitled What Are We Allowed To Believe About China? – here’s an excerpt…

Are you allowed to believe that China exercises significant influence over America’s major media? Chinese investors and companies, all with ties to the Chinese Communist Party, hold relatively significant stock positions in all six of the media companies that control 90 percent of the television channels and film entertainment producers in America. We’ve seen the Chinese exert influence on various film and television productions — there’s a reason the Red Dawn remake, in a classic example, had the wholly implausible North Koreans as the invading bad guys. Is it so hard to believe something similar is at work with respect to news? We’ve already seen it in the case of Bloomberg.

Because once you are allowed to believe the Chinese have motive, opportunity, and capability to do these things, you’ll find a mountain of evidence, though admittedly much is circumstantial, that they’re playing a lot larger role in our current woes than we give them credit for.

It’s long been known that China virtually controls Hollywood. Chinese investment dollars prop up the film industry and Chinese control over what movies are allowed on movie screens in that country mean very few big-budget movies they don’t like even get made.

What about legacy media in the United States?

Can Chinese money control the New York Times? What about the Washington Post? The Post is owned by Jeff Bezos; if it weren’t for relationships with Chinese manufacturers able to undercut the competition with practically slave labor, Amazon would never have been able to become what it is.

Chinese stakes in corporations which own cable news outlets have already produced an effect on movies and TV shows. Would they not produce a similar effect at an MSNBC or CNN?

And are we allowed to ask about these things?

Is this a conspiratorial rabbit hole to go down? Of course it is. But by now it ought to be patently obvious that the Chinese operate that way. It’s standard communist operational procedure: remember the famous quote by Fred Thompson’s character in The Hunt For Red October? “A Russian doesn’t take a dump without a plan.” Pair that with Sun Tzu’s time-honored statement that all battles are won or lost before they’re even fought. Plotting and conspiracy were part of Chinese culture long before the communists took the place over; now, it’s practically all they do.

If you don’t see evidence China is playing a long game on us and executing influence operations across the board (why are so many university professors getting indicted for Chinese espionage?), you aren’t paying attention. Shouldn’t we ask whether that influence doesn’t make its way into the newsrooms?