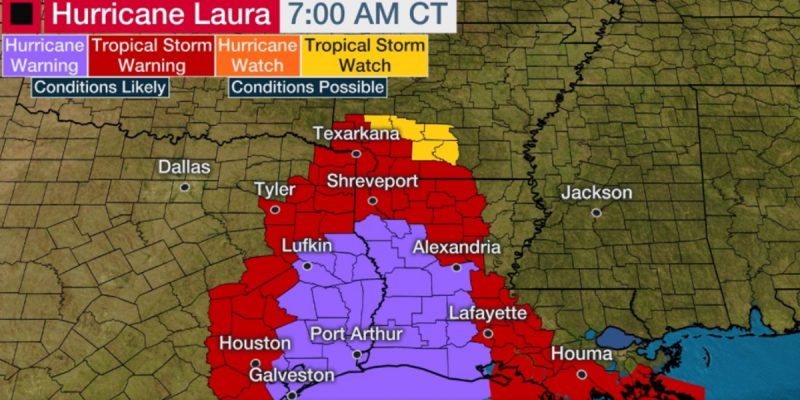 The people of Lake Charles have been through this before, of course. Hurricane Rita rolled through the area in 2005, one month after better-known Katrina had devastated New Orleans and the Mississippi Gulf Coast. That one-two punch was what Gov. John Bel Edwards was attempting to sell to the public over the weekend as he demanded citizens across the state shelter in place for 72 hours wherever they went to sleep on Sunday night.

That advice turned out to be worthless, as Hurricane Marco became Tropical Storm Marco became nothing, and most of the state barely even saw any rain from that system as it broke apart.

But Laura is a real thing, and now appears to be poised to do what Rita did to Lake Charles. Thus Hunter’s warning.

Jim Cantore is now in Lake Charles, after all.

Laura is coming in as a Category 3 hurricane, which is what Rita was.

Hurricane Laura has rapidly intensified into a Category 3 over the Gulf of Mexico as it heads for a destructive landfall on the upper Texas and southwest Louisiana coasts by early Thursday morning. A potentially catastrophic storm surge and damaging winds will batter the region and a threat of flooding rain and strong winds will extend well inland.

Residents along the upper Texas and southwest Louisiana coasts should finish preparations now for a major hurricane strike. Follow any evacuation orders issued by local or state officials.

Laura is centered just over 250 miles south-southeast of Lake Charles, Louisiana. It’s tracking to the northwest at 15 mph.

A wind gust to 107 mph was reported at a buoy near the center of Laura early Wednesday morning.

The hurricane is now a Category 3 with 115 mph winds and is expected to continue strengthening. Laura could briefly become a Category 4 hurricane later today.