Cantrell, the worst mayor in New Orleans’ history, just signaled that yesterday. Here’s a Facebook message she put out… 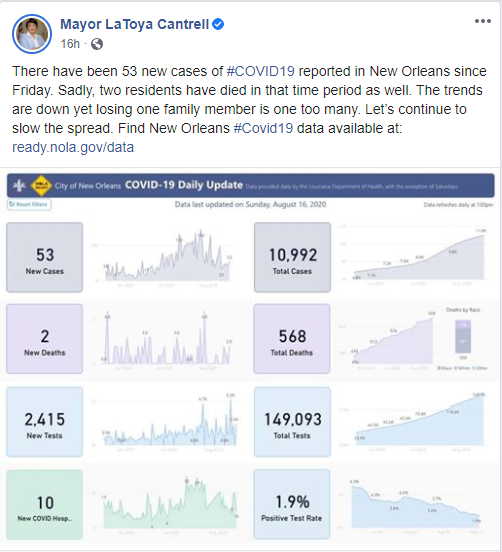 A 1.9 percent positive test rate is about as low as it’s possible to achieve with a coronavirus, and yet Cantrell is still warbling about how New Orleans has to “continue to slow the spread.”

When is the spread sufficiently slowed for New Orleans to have a functional economy again?

Let’s not forget that there is a cost to keeping the city’s economy shut down. For the Karens out there who think that hammering down on everybody’s life indefinitely is just smart medicine, you’re responsible for inflicting a good deal of misery on your fellow man. Here’s an example…

In about a week, there will no longer be eviction protection for tenants. That’s especially hard on the many people who are out of work due to the pandemic, so anyone at risk of eviction is encouraged to speak to their landlord, immediately.

“I’m not looking forward to this at all,” said First City Court Clerk Austin Badon.

A surge of evictions is expected to be filed in New Orleans and across the country in about a week.

“This is another pandemic that might fall upon the city of New Orleans as well as other major cities across the United States,” Badon said.

Badon began preparing his office for the influx starting August 25. That’s when the 30-day notice ends since the CARES ACT expired. He’ said he’s expecting a surge in evictions next week.

The clock is ticking, so Badon says now is the time for tenants who are at risk of eviction to speak with their landlords.

“Try to set up a payment plan. Try to work with (your) landlords on doing something, paying them something, because I understand both sides,” Badon said. “The landlords are in a tough situation as well. They’re afraid of losing their property, but I hate to see the possibility of families being put on the street and going through an eviction — especially when we’re going through this pandemic right now.”

And no, you can’t fix that problem by stopping landlords from evicting their tenants for another month or two. That rent has to be paid. The landlords are chasing mortgages. They have expenses, too.

How do you pay the rent when the hotel you work for has single-digit occupancy? How is it paid when your restaurant or bar is shut down?

And yet Cantrell is still babbling about slowing the spread. She doesn’t even realize what’s actually spreading in New Orleans, and she won’t until the city is a complete ghost town.

COVID-19 has illuminated a lot of things about America and Louisiana. Perhaps the most brightly-lit is the complete and total deficit of leadership we’re saddled with here in the state, which is more recognizable in New Orleans than anywhere else.

Interested in more news from Louisiana? We've got you covered! See More Louisiana News
Previous Article SADOW: Louisiana’s People Are Taxed Too Much, Not Too Little
Next Article SADOW: Bossier Voters Turned Out For Tax Hikes On Saturday