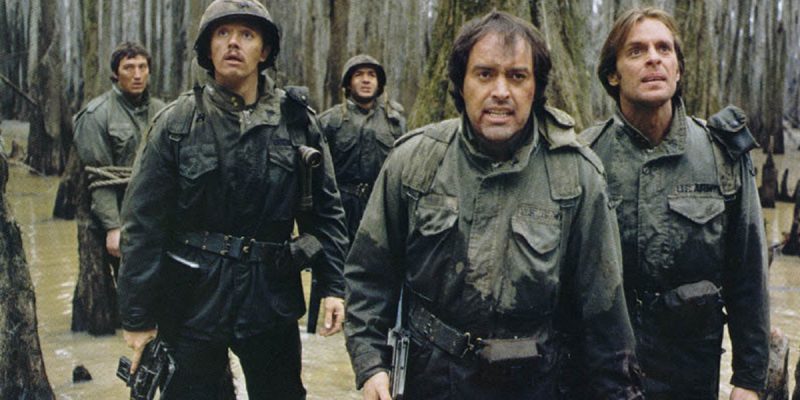 In case you haven’t heard, there’s a wannabe Black Panther group which goes by the acronym “NFAC,” which stands for “Not F**cking Around Coalition.” The group is fronted by John Jay Fitzgerald Johnson, an unsuccessful California rapper calling himself Grandmaster Jay, who founded NFAC behind the idea that “We are a Black militia. We aren’t protesters, we aren’t demonstrators. We don’t come to sing, we don’t come to chant. That’s not what we do.”

You might not know who these people are, but you probably saw them at work. They’re the people who showed up at Stone Mountain, Georgia, where there is a rock-face sculpture of several Confederate figures, and proceeded to make a show of martial force in reaction to the Ahmaud Arbery shooting…

That was in early July. Then they showed up in Louisville to complain about the Breonna Taylor thing…

Yes, they shot their own people. It was an accident.

Why are we talking about these guys? Because they’re now saying they’re going to come to Lafayette.

Bear in mind, these guys claimed they had 1,500 people at Stone Mountain and 3,500 in Louisville; independent estimates are that they inflated their ranks by a factor of five to 10.

And how even that is possible, when every hotel room within a three-hour drive of Lafayette is full with evacuees and recovery workers from Hurricane Laura, is something else entirely.

Let’s remember, 10,000 men is a military division. The idea you could raise something of that size and bring it to a place like Lafayette, Louisiana in the aftermath of a hurricane for any length of time without a supply train is…fanciful. That’s a fantasy. Where are they going to stay? How are you going to feed them?

Their previous exploits brought no reaction from the locals, because hey – if you want to open carry in Georgia or Kentucky, God bless you. Ditto for Louisiana.

That said, if you listen to this Grandmaster Jay clown, he’s making some wild demands and declarative statements which are, let’s say, unwise. As such, we should approach this question along the lines that he might actually be serious about what he says.

And let’s call that a mistake. Here was the reaction of Clay Higgins, who is the wildly-popular U.S. Congressman from Lafayette and Lake Charles and surrounding areas, weighing in on the NFAC plans…

Facebook ended up taking that post down, but not before pretty much everybody in Louisiana had screenshotted it – mostly because they wanted to save it for posterity as the greatest thing they ever read.

Because here’s the thing – and if you’re one of the NFAC’s Black Panther wannabes, it’s really crucial you understand this – Clay Higgins is not some outlier or wannabe badass. Clay Higgins is literally Everyman of the Lafayette area.

Lafayette, and the areas surrounding it, might be the most up-armored place in the whole United States. They shoot every kind of animal you can imagine there, and they’ve come up with the most amazing recipes for how to prepare it for a table that you can imagine. These are people who have been killing things all their lives which aren’t even much of a nuisance, much less a threat. And you want to show up carrying rifles with the idea you’re going to intimidate them into demanding the cops who shot Trayford Pellerin be arrested before the Louisiana State Police finish their investigation?

If you come to Lafayette thinking you’re going to show the local pols what’s what, you are literally taking your life in your hands.

Understand something. Lafayette, Louisiana is NOT Portland or Chicago. It isn’t Louisville. Lafayette is one of the most conservative cities of some size that you will ever come to.

Lafayette is populated with a bunch of people with French-sounding names who come from a lineage of grievance every bit as strong as you come from. Their people got thrown out of France and sent to Canada, and then they got thrown out of Canada by the British and got sent to the swamps of Louisiana where they had to carve out a life and culture among the snakes and alligators of some of the roughest country North America could throw at them.

These people will look at you and laugh like they just heard the funniest joke ever told.

When Higgins says “make sure your affairs are in order,” he isn’t joking. He isn’t necessarily telling you someone will shoot you dead, though he’s certainly not not telling you this; what he’s saying is also that unlike a place such as Portland, where you can cause a disturbance and have the local DA laugh and send you on your way or find a judge who’ll release you on your own recognizance for showing up and fomenting a “mostly peaceful” riot, in Lafayette, Louisiana the judges will take quite unkindly to your actions and impose considerable bail on you which isn’t easily paid. They might even decide to hold you without bail, depending on your charges.

And the juries in Lafayette, Louisiana won’t be like juries in Seattle or Chicago. Remember, you’re coming to a place which by the grace of God was spared a hurricane late last week; it passed an hour to the west and more or less wiped out Lake Charles instead. People who live in Lafayette have relatives who live in Lake Charles, and now those relatives are occupying spare bedrooms and living-room sofas every night in Lafayette – and there is zero indication this will change in the foreseeable future given Lake Charles’ condition.

People who just had to take in distraught relatives are in no mood for further inconvenience. Bringing thousands of militants for some sort of demonstration aimed at intimidating the locals into…we’re not even sure what, exactly, is not going to be received well.

Even in the event Higgins is all wet and the Boudreauxs, Thibodeauxs, Trosclairs and Heberts don’t decide to stage a real-life remake of Southern Comfort on the streets of Lafayette, get yourself arrested and find these guys on the jury, and what you’ll find out is they really, really don’t appreciate having to deal with your out-of-town bullshit while Southwest Louisiana is trying to rebuild from a Cat 4 hurricane.

Not to mention nobody, nobody in Lafayette is sympathetic to the career criminal Trayford Pellerin’s situation. He was shot after he led police on a half-mile hike from one gas station, where he had the cops called on him for threatening black people with a knife, to another gas station where he was attempting to enter a convenience store in which women and children, who were black, would apparently be trapped. In shooting him, Lafayette police prevented a situation they had allowed to go on despite twice attempting to diffuse it with tasers from turning into a hostage crisis or worse.

Yes, there are locals who protested the shooting. No, those locals are nothing even close to a majority. The mayor there, Josh Guillory, caught more flak from his constituents for appearing soft early on than for later deciding that he didn’t have any interest in genuflecting to the local Black Lives Matter agitators.

Lafayette might be the worst possible place for you people to attempt to plant your flag, and you’re talking about doing it at the worst possible time with that hurricane coming through. The locals will be so disgusted with your arrival, given the timing, that you literally are taking your life into your hands.

It’s not even a racial thing. White Antifa clowns coming to Lafayette to make trouble while the city is full of recovery workers, evacuees, out-of-work oilfield workers, and even just irritated normals from the  COVID shutdowns will find themselves just as unpopular. And the reaction of local law enforcement will reflect that sentiment.

It’s like Higgins said when we talked to him Tuesday before he put out that legendary Facebook post: this is not a bunch of Portland hippies.

Interested in more national news? We've got you covered! See More National News
Previous Article VIDEO: Biden Might Be Better Off Back In The Basement After All
Next Article Tomorrow, Dan Fagan Makes His Return To The Hayride