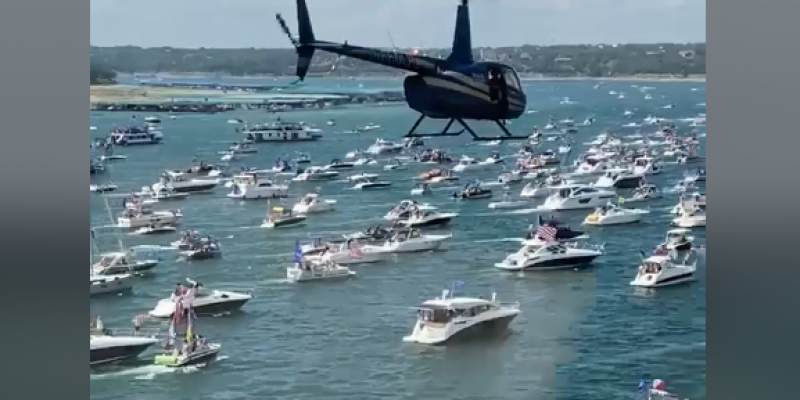 If anything disturbs the mainstream press it’s when a liberal bastion suddenly displays signs of conservative resurgence.

Keep in mind that in Austin, the entire City Council is liberal, the county commissioners court is one vote away from becoming all-Democratic, and the courts are entirely liberal. It’s truly the blue dot in the tomato soup of Central Texas. It’s reputation lately as a hive of homeless camps and “mini-Portland” needs no further mention here.

Over Labor Day weekend, an independently organized Trump Boat Parade drew in an estimated 1,300 boats, complementing similar parades in various locations across the U.S. Counting passengers and onlookers, the Lake Travis event made for one of the largest conservative events in recent memory for Austin-area conservatives (or those simply fed up with the current regime for that matter).

Though at first present for the spectacle alone, local press immediately began to telegram that “several” boats sank, immediately drawing the eye of the national mainstream media and, accordingly, liberal memes and associated trolling using the coverage as some sort of metaphor for President Donald Trump‘s November election prospects.  It was even repeated in the New York Times, whose ignorance of the lake was on full display.

You would think the Titanic sunk.

The organizers of the parade, according to The Travis Tracker, planned for five tow boats to be on hand for the event, which attracted amateur boaters and all kinds of water craft from small pontoon boats to personal yachts. Three boats became submerged while being towed — out of five that reportedly took on water. There were large wakes generated by the massive number of boats which may have been to blame.

A radio channel was reserved for emergencies and other communication. Local ambulance workers did not respond to any incidents during the parade. Nobody was seriously injured.

Tell us, again, how this was a disaster?

Here’s more from the Travis Tracker:

The Democrat-controlled Travis County Sheriff’s Office tweeted that it “responded to multiple calls involving boats in distress during the Trump parade on Lake Travis. Several boats did sink” (emphasis ours). Replies to the tweet were disabled. An Austin American-Statesman photographer reported at least three vessels appearing to have been “swamped” in the somewhat choppy waters following rainfall in the area over the week, but these incidents appear to have been at the onset of the event and not en route and easily mitigated.

As a precaution, organizers arranged for an aquatic towing service to provide five boats, all monitoring VHF channel 21 as an assigned frequency for inter-craft communication. Participants to whom we reached out reported seeing no sinking boats on the parade route.

The event began with a prayer and singing of the National Anthem broadcast over the radio channel. At noon five parachute jumpers, among them three combat veterans, displayed flags […].

A “Keep Texas Great: Vote Trump 2020” banner was flown around Lake Travis throughout the event, with air cover by a vintage biplane and a World War II-era B-52 bomber piloted by members of the Commemorative Air Force.

A variety of waterborne vessels — from small fishing boats to personal yachts (and, we believe, a pirate ship-like boat) took to the route between 12:20 and around 2 p.m. between Emerald Point and the area around Point Venture on the North Shore and back.

Could more have been done to assure a safer parade? Yes, and for starters a longer parade route to alleviate the danger of being swept up in a wake. Several skippers we spoke to reported boats exceeding the parade’s speed limit. Everyone living along the lake’s winding shores has an opinion, and hopefully organizers are listening.

But considering the completely grassroots nature of the event and the unexpected turnout, everything went according to plan. There were, after all, five tow boats in the plan — which, come to think of it, makes for a better metaphor for the conservative movement.