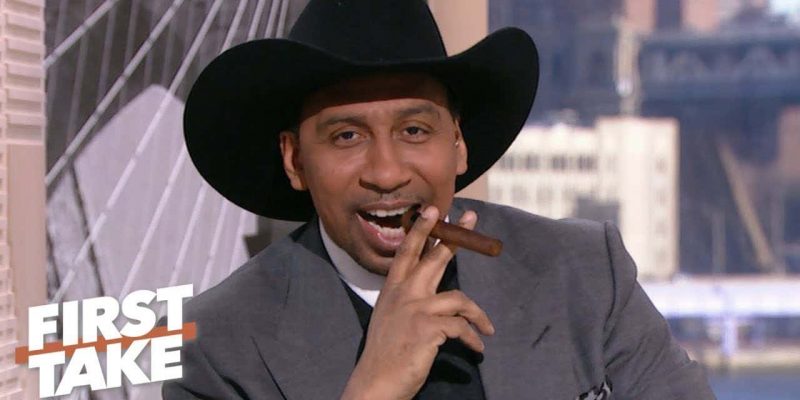 This has become top-rate entertainment worthy of the very best in comedy.

Not that many folks are watching or care anymore, but ESPN’s Stephen A Smith showed today why the network he works for is, more than ever, in the tank for Disney. It would seem that the network would have learned its lesson on mixing politics with sports at some point, perhaps after the ESPYs disaster.

The only reason I found out about the story is because Newsmax ran a story on it this evening.

On Thursday morning’s First Take, Smith spoke with his super-serious countenance and pseudo-sincerity, a gloomy extreme to the act he puts on when he’s boisterously yelling his opinions on set. Surely, there were droves of Americans across the country who felt sorry for him when he had to share, was forced to share, one of the “toughest, toughest positions” he’s ever taken on the show.

The subject: Hall of Famer Steve Nash being named new head coach of the Brooklyn Nets.

“Ladies and gentlemen,” Smith proclaimed, “there’s no way around it: this is white privilege. This does not happen for a black man. No experience on any level as a coach and you get the Brooklyn Nets job?”

These comments were juxtaposed with these gems:

“Steve Nash is a sensational dude and if anybody deserves this opportunity absent the experience that obviously he has as a coach, it’s him. Steve Nash is widely respected and loved by a whole bunch of people in the NBA — black, white, and beyond.”

Smith congratulated Nash on obtaining the gig. He added that his criticism was not about his skills as a player or the number of people in the league who like him.

Wow, Coach Nash might say. Thanks so much, Stephen A.

The truth, (and let’s face it, the truth clearly doesn’t matter to Disney-owned ESPN), is that this move by the Nets is not unprecedented. Not even close, actually. Many organizations have chosen former guards, especially point guards, to lead their teams on the sidelines. Perhaps this is because of a guard’s natural proclivity for leading a team. Kind of like a quarterback.

Doc Rivers took over as head coach of the Orlando Magic in 1999. He’d had no prior coaching experience, but by the end of his first season, he had been named league Coach of the Year.

In 2000, Indiana hired Isiah Thomas to lead the team. Like Rivers, he’d had no coaching experience either. The Pacers made the playoffs every season he was there.

Mark Jackson and Steve Kerr, this decade. Back to back with the Golden State Warriors, who just ran off a series of seasons that can rival some of the best of all time.

Derek Fisher, a disaster with the Knicks, now head coach of the WNBA’s Los Angeles Sparks.

Of the six examples just named, five are black men.

ESPN analyst Jay Williams tweeted, “Come on SA, Steve Nash being chosen over Mark Jackson/Ty Lue is not “White Privilege”. 2 superstar black athletes ultimately made the decision & we know who they are and what they are about.”

Those “two superstar black athletes” would be Kevin Durant and Kyrie Irving, with Durant already having developed a working relationship with Nash when he was a consultant with the Warriors.

Looks like Stephen A didn’t do his homework. Or maybe he did and he’s just a puppet for Disney.

Or, given the pure imbecility of this week’s stories concerning Nancy Pelosi and Andrew Cuomo, plus the condemnation of Pelosi’s actions and attempted excuse-making by none other than liberal stalwart Don Lemon of CNN, maybe somebody good and in charge behind the scenes is now pulling the strings of the mainstream media, making sure Americans see full well what dishonest propaganda the Left has been pumping for decades. My suspicions with this conspiratorial possibility are growing by the day as I think that surely, they can’t seriously believe that voters on the fence deciding between Trump and Biden will side with them. Surely they know that middle-of-the-road voters still making up their minds aren’t looking for this type of lunacy to pervade this country for the next four years.

Whatever the case is, one thing is for certain: nothing is hidden about the Left’s sheer absurdity anymore. Nothing.

Interested in more national news? We've got you covered! See More National News
Previous Article ANALYSIS: Why ‘Simple As 1-2-3’ Mail-In Voting Scheme Was Put On Ice In Houston
Next Article SADOW: No, Your Arguments For More Mail-In Ballots Are Not Valid