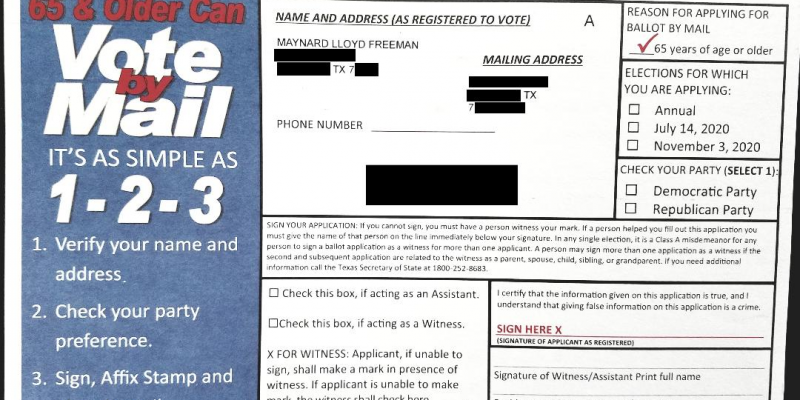 The Texas Supreme Court on Wednesday ordered the Harris County Clerk to halt the delivery of mail-in ballot applications to approximately 2.4 million residents.

The Court temporarily forbade County Clerk Chris Hollins from mailing the applications, encouraging those under the age of 65 or who are not physically unable to vote to request a mail-in ballot, according to the order.

Texas Atty. Gen. Ken Paxton is hatching a plan of his own to curtail the county’s plans on a more permanent basis.

This back-and-forth between the third-largest county in the U.S. and Republican leadership has made the Houston area ground zero in a national fight over whether to allow for mail-in ballots as a means of keeping voters, poll workers, and volunteers safe from COVID-19.

Hollins contends it is an emergency measure due to COVID-19. Democrats, who have long favored vote-quick concepts such as electronic ballots, are excited of the prospect. This has presidential contenders Joe Biden and Donald Trump arguing whether postal voting is easily “rigged” (Trump’s now-famous choice of words).

Democrats continually point to a low number of felony convictions concerning voter fraud as proof a mail-in system would not, likewise, be rigged.

During the 2016 presidential election, around 33 million ballots were mailed in across the U.S. — about a quarter of all votes.

From the hip: Three things need to be said about this situation while it’s in judicial limbo.

The Hayride contributor Leland Freeman‘s father, deceased since 2009, had an invitation to vote sent to his address by Harris County. And this, Freeman said, despite many attempts to have him removed from the county voter rolls. Here it is: “as simple as 1-2-3.”

At least it wasn’t the ballot itself — though this certainly makes it easier for those familiar with the deceased to vote in their stead. (Would a completed mail-in ballot ever be caught if the dead person is still on the county voter rolls?)

Despite the earned or unearned Democratic reputation for encouraging cemeteries to vote, liberal interest groups lined up to urge the state’s highest civil court to side with Harris County. Which leads to a second side note to this saga:

Grocery chain H-E-B, known for its vociferous opposition to school choice and support of Democratic candidates, urged the Court in a letter (see below) to allow for expanded postal voting. Charles Butt, chairman of the board and heir the supermarket fortune, relayed H-E-B’s experience in expanding curbside pick-up and delivery options “without the customer having to interact face-to-face with another individual.”

H-E-B has been among the strictest, requiring masks (even when a customer claims a respiratory condition), assigning line wardens to maintain order, and limiting certain items when other grocery stores had no issues meeting demand. As it happened, H-E-B had consulted with several formerly fascist countries on how to handle consumer demand in the time of China Virus.

On every occasion this writer has used H-E-B’s curbside pickup service, there have been items exchanged for a more expensive organic or premium alternative — sometimes for an upcharge of $2 or $3 more per item than what was expected. Upon walking into the store, the actual item ordered is usually found to be in ready supply on the store shelves.

While that may not constitute “fraud,” per se (perhaps clever marketing, or a “personal shopper” missing the item before a restock), it does underscore the potential for other types of interference between the mailbox and the ballot box. We don’t typically mail cash to pay bills at risk of the cash being stolen — that’s plain common sense. And how many of us have gotten a surprise late fee for a bill not paid when we know the payment was sent or electronically processed?

These things happen. And so do voting irregularities.

Third: While research shows that voting by mail increases voter turnout, greater turnout is not always the beneficial thing it seems to be on the surface. Voter ignorance has handed us more than a few “surprise” candidates — selected mostly by random choice and definitely not voter education.

Once the door is swung wide open to voter coaching (political operatives calling recipients of mail-in ballots — assuming it goes forward), this becomes the equivalent of allowing campaigning in the polling places. That’s something any election judge worth their salt would quickly eject from the premises.

Democrats and progressive activists will always assume that the majority of Americans will agree with their values and that there exists and upward curve that will in time hand their candidates increased victories in future elections. This is, of course, fantasy as the U.S. is a center-right nation and trending in that direction. We expect them to play this card of “increasing voter turnout” under the guise of pure altruism, but should not be fooled into thinking that is the political motivation. Democrats have for years become the champions of “identifying” nursing homes and housing projects, busing in voters who have been coached to vote their way in order to preserve government subsidies. They will do everything they can to keep this going, and to greatly expand on it during a national crisis.

Interested in more news from Texas? We've got you covered! See More Texas News
Previous Article Will The Advocate’s Editorial Page Call Andrew Cuomo An “Idiot?”
Next Article Facts Be Damned, Stephen A. Shows Again Why ESPN is a Joke