We thought we’d ask, since the corpulent, deteriorating mediocrities at John Georges’ similacrum of a newspaper put forth an editorial under the byline of “Our Views” – which they do when none of the clowns on their editorial staff is willing to take responsibility for an especially stupid or nasty entry – entitled “Clay Higgins shows he’s an idiot. Don’t take his medical or public safety advice.”

No, we aren’t going to link to it. The Advocate refuses to link to anything which appears at The Hayride, so our new policy is to afford them the same courtesy. And in this case there’s no reason to excerpt the op-ed which neither Mark Ballard nor Lanny Keller (fraudulent “moderate” that he claims to be) nor the barely-literate Will Sutton, who inexplicably now has a voice in editorial decisions at that paper, nor any of the other simpletons working there would put a name on. It is what you would expect it to be – a broadside launched at Higgins for his warning to a group of wannabe black-nationalist revolutionaries threatening to invade Lafayette for the purpose of intimidating its Republican mayor into kowtowing to Black Lives Matter demands that if they do so it’s an inherently dangerous and possibly deadly decision to make.

A paper reflecting common values among the area it represents would have endorsed Higgins’ warning. Perhaps not in the strong terms Higgins voiced it, but to say that the No F**king Around Coalition, whose trag-comic incompetence with the weapons they brandish led to multiple people being shot in Louisville when they last decided to demonstrate with rifles in the name of black outrage, isn’t welcome and won’t be treated as such in a city on edge in the aftermath of Hurricane Laura would have been the least we should expect from a publication which seeks to be the paper of record in Lafayette.

Certainly the Advocate could have been vocal in ripping into Jamal Taylor, the kinda-sorta local head of the Black Lives Matter crowd in Lafayette demonstrating in the aftermath of the Trayford Pellerin shooting. Taylor, a teachers’ union goon from St. Landry Parish, appears in that mind-blowing video of Antifa/BLM demonstrators attempting to block people from getting gas at the gas station where Pellerin was shot; he’s also been quoted as saying “a little rain” wouldn’t dissuade protesters from continuing to cause chaos in Lafayette.

But no – instead the Advocate has lionized Taylor, going so far as to write sympathetic stories about how he’s gotten “death threats” from clearly racist KKK types. Or something. They’ve also run editorials bearing his name in their Letters section.

That’s probably because of this… 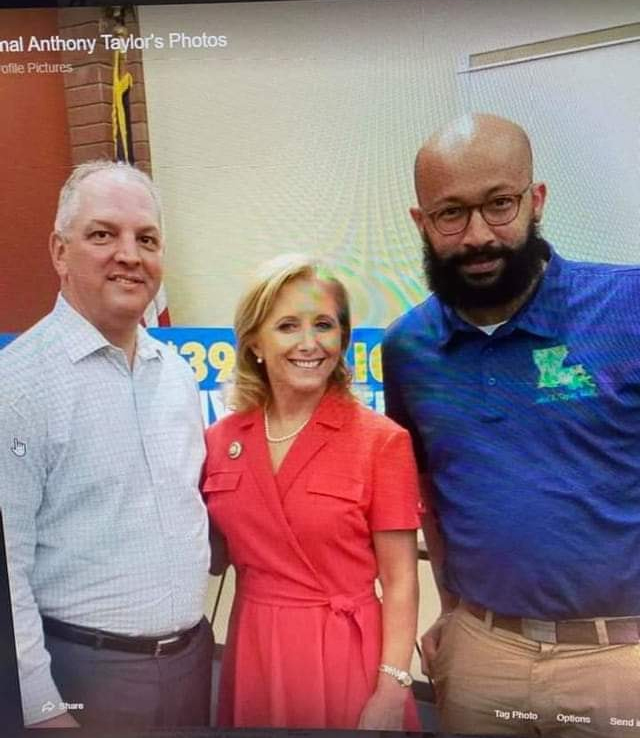 So we know where the editorial staff at The Advocate stands. We already knew it based on the treatment they afforded the only conservative columnist they had, which is why Dan Fagan is back home at The Hayride now.

But to our question. If Clay Higgins is an “idiot” for “threatening” the out-of-state militants at the NFAC who want to come to Lafayette and make life worse, what do Will Sutton, Lanny Keller and the rest of the geriatric commissariat at The Advocate have to say about Andrew Cuomo?

Because if Higgins is making threats, what’s Cuomo doing?

New York Gov. Andrew Cuomo on Wednesday all but threatened President Trump’s safety if he returns to New York City in a rant responding to an exclusive story by The Post that Trump is looking to pull federal funds from “lawless” cities including New York.

Cuomo called an emergency press briefing within a half-hour on Wednesday night to tear into Trump for the order, which cites New York’s rising murder rate and defunding of the NYPD.

“He better have an army if he thinks he’s gonna walk down the street in New York. New Yorkers don’t want to have anything to do with him,” the Democrat said, all but threatening the commander-in-chief.

But Cuomo — who, like Trump, hails from Queens — wasn’t done. “He can’t have enough bodyguards to walk through New York City, people don’t want to have anything to do with him.”

This isn’t directed at a bunch of rabble no city actually wants around. It’s directed at the President of the United States of America, and it’s directed by a man who frequently publicly attacks people with whom he disagrees politically. Not to mention that same man is directly responsible for killing some 12,000 people by sending COVID-infected patients into nursing homes across New York to spread the virus. And he’s walking around without a mask while demanding the people of his state wear them, just for a little added spice.

What say you, Will Sutton? Any judgements to make about Cuomo? How about you, Lanny Keller?

Anybody got something to say?

Right. That’s what we thought. Clay Higgins is an “idiot,” but Cuomo is a public servant to be admired by all.

Anyone advertising in or subscribing to this whitened sepulchre of a journalistic endeavor is committing an attack on reason. It’s time for the Advocate to sink beneath the waves, forgotten and forsaken by the public whose trust it has progressively abused and disparaged.

Interested in more national news? We've got you covered! See More National News
Previous Article Louisiana’s Neighbors All Have A High School Football Season. Why Don’t We?
Next Article ANALYSIS: Why ‘Simple As 1-2-3’ Mail-In Voting Scheme Was Put On Ice In Houston