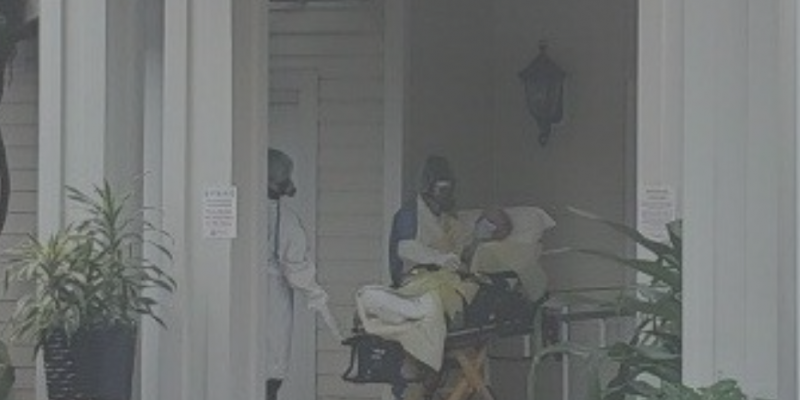 Norred Law PLLC sued Gov. Greg Abbott, state officials, and three long-term care facilities after several people after being isolated in nursing homes as a result of the governor’s executive orders and mandates.

“This state is not run by a monarchy,” Warren V. Norred, the attorney representing four plaintiffs, said in a statement. “The governor cannot suspend laws … that is something that only the Texas Legislature can do.”

In addition to the governor, Norred sued the state Health and Human Services Commission and its director, Cecile Young, Pine Arbor Nursing Home and Park Valley Inn Health Center, and San Gabriel Rehabilitation and Care Center on behalf of Texas residents Marcy and Aline Rennenberg and Wanda and Leland Webb.

The lawsuit was filed Sept. 10 in Travis County District Court.

Marcy and her mother, Aline, and Wanda and her husband, Leland, are separated by “policies implemented by nursing homes at the demand of Governor Greg Abbott and state agents,” the 165-page complaint states.

The nursing homes being sued have breached their contracts with the respective plaintiffs by preventing medical power of attorney representatives from visiting residents, the lawsuit claims. Not doing so has resulted in elder abuse, the complaint alleges, and also violates the federal Americans with Disabilities Act.

“After weeks of working with folks who are suffering with the loss of loved ones due only to Gov. Abbott’s top-down edicts shutting down visits to nursing homes, the relatives of loved ones imprisoned by the Governor have had enough,” Norred said in a statement.

Abbott’s unending emergency orders, which began in March, Norred says, are “an unreasonable top-down approach [that have] resulted in untold suffering that is very real and horribly damaging in order to stop a mere chance of damage.”

“It would be one thing if the rules were even effective,” he added, “but our clients have watched delivery drivers have their temperature checked and then waltz into nursing homes and drop off vending supplies,” when family members have been prohibited from spending time with them.

The arguments made in the lawsuit are similar to those made by a national movement with groups in all 50 states, called Caregivers for Compromise. The group is working to end the isolation of residents in long-term care facilities as a direct result of state COVID-19 regulations.

Initially, due to a number of factors, nursing home deaths accounted for 40 percent of coronavirus deaths nationwide.

State regulatory responses have worsened quality of care and life for residents, coalition members argue. Their goal is “to achieve a reasonable living condition for long term care residents [by] preventing as many deaths from COVID-19 protocols as from the disease itself.”

The group’s goal is to ensure that long-term care facilities provide an Essential Caregiver Designation to allow residents to spend time with one screened and tested family member, who prior to visitor restrictions was regularly engaged with at least weekly visits with the resident. Its members also advocate that rapid COVID-19 testing be performed in these facilities for staff members and visitors, including essential caregivers. 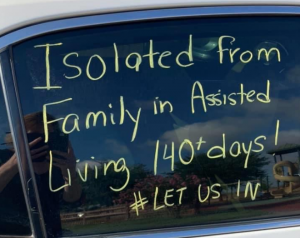 Isolation has resulted “in hopelessness, loss of appetite, cognitive decline, inactivity, despondency and death since March of 2020,” they claim.

“While some limited forms of visitation are now allowed in a majority of states, these forms of visitation often exclude that segment of the population who are bedbound, have traumatic brain injuries, have mobility issues, are blind or deaf, are severely autistic or suffer from dementia or Alzheimer’s,” they add.

Jeanette Christensen, of Canyon Lake, Texas, and member of the Caregivers-Texas group, says she is prevented from caring for her husband because of the governor’s order.

During a recent visit with her husband during which she was able to communicate with him by a phone through a glass window, she said he asked her, “Are you killing me?” because he is not allowed to have any contact with her or anyone else in his family, she told The Center Square.

Her 63-year-old husband, a disabled veteran with a very rare form of dementia, lives at the Frank M. Tejeda Texas State Veteran’s Home in Floresville.

In one of her many letters sent to state officials, she wrote, “The Covid-19 induced guidelines that have him locked in and me locked out, have morphed into a cruel, lonely, isolated, and dismal existence with no real end in sight. This has become abusive as it is very much against any logical care-plan for maximum health and quality of life. In blunt terms, the protective measures are making him worse and I dare say, killing him.”

Christensen and the more than 2,200 members of the Caregivers-Texas group have their stories of loved ones dying or being mistreated posted on social media networks detailing isolation policies implemented by nursing homes in order to comply with Abbott’s mandates.

She, and numerous others, posted comments online about not receiving any responses to emails and letters they have sent their state and local representatives. Christensen’s one email to Lt. Gov. Dan Patrick and three to Gov. Abbott and not been acknowledged, let alone answered, she said.

“We need help,” Christensen says. “My husband needs help. People who could and should be thriving are not. Instead, they are dying; confused, lonely, abandoned, and in larger numbers and more expediently than they would if not for the impossible-to-get-through guidelines.”

Her state representative, Kyle Biedermann, said he has written Abbott on numerous issues, including this one, and has “gotten nothing but silence in return.”

His office also reached out to the state Health and Human Services Commission to  “try and convince them to loosen regulations, but they only are allowing end of life visitations for pastors” and other clergy.