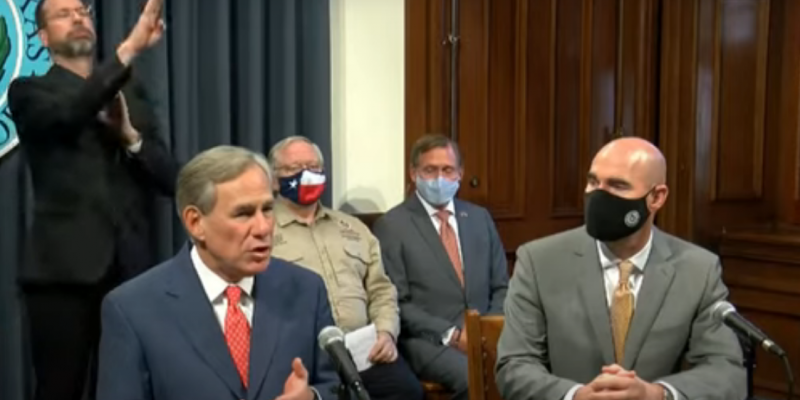 As part of the earlier statewide emergency response to the Wuhan Virus, Texas was divided into 22 “hospital regions” for the purposes of distributing equipment and managing state personnel. Today it was announced all hospital regions except for three are allowed to increase their capacities to 75 percent. This heightened capacity covers restaurants, retail, gyms, and office buildings. The previous limit was 50 percent, which, as one consequence, resulted in many restaurants cordoning off every other table from guests.

Excluded were the Rio Grande Valley, Laredo, and Victoria regions — still “the danger zone” according to Abbott and other state officials present at the conference. Their capacities will remain at 50 percent until coronavirus patients make up less than 15 percent of all hospital admissions.

Officials present noted a general downward trend of coronavirus infections and reports, including deaths, hospitalizations, and new cases. The state had recently improved its statistics gatherings to filter out multiple reports.

No mention was made of lifting the statewide mask mandate.

Nursing homes, which have been closed to all but necessary personnel, would be able to start allowing a small number of visitors such as family members.

Elective surgeries may now legally commence in all but the three regions.

It appears bars and night clubs will still be expected to remain closed unless they become restaurants by state standards (51 percent or more of sales being food and related services). Bars have been under closure orders since late June.

The changes to COVID-19 restrictions are expected to take effect on Monday.

The state COVID-19 response is as expected a major campaign issue in election year 2020 with a month to go before early voting in the general election in Texas. In a special election taking place now in North Texas, Rep. Drew Springer faces embattled salon owner Shelley Luther in a race for a vacated state Senate seat. Luther is a political newcomer propelled to the spotlight due to her resistance to local and state orders, which resulted in her temporary imprisonment.

From the hip: Will this additional grace from state leaders be enough to prevent the expected murrain of customer-oriented businesses? It’s too early to tell, but two things should be said about that:

One, an additional 25 percent capacity can’t hurt, especially as demand for services continues to remain high despite fears. This writer had a 45-minute wait outside at a local restaurant and an equal time waiting on food to arrive. Surviving restaurants are having to lay off and terminate staff in order to stay open, so the additional capacity could help shorten those lines.

Two, not everywhere in Texas is wearing masks and limiting capacity. Take a drive through the Texas Panhandle and away from the major highways and you’ll see that, frankly, many businesses aren’t complying with statewide orders or are one of the 70-plus counties that are exempt. There are also people who, like Luther, are rebelling against the orders or finding loopholes of various kinds. To say Texas is “gradually reopening” is an exaggeration of the fact that the Texas economy is still very much alive, but struggling for air.