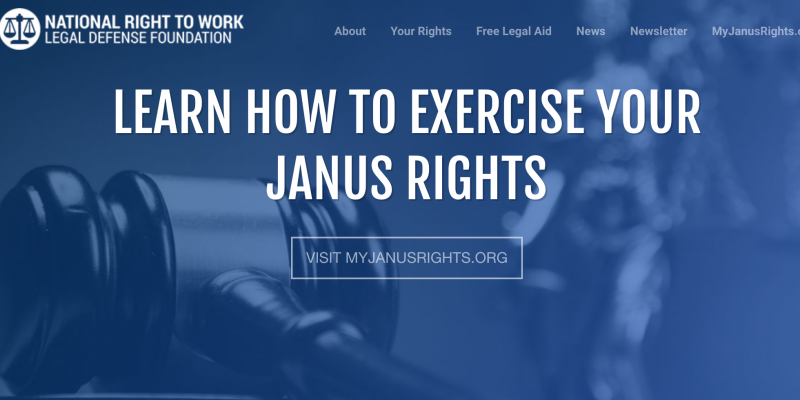 The First Circuit Court of Appeals in Boston has ruled that private sector workers who have refrained from union membership cannot be charged for union lobbying as a condition of employment.

In Janus vs. AFSCME, the Supreme Court ruled that public sector workers could not be forced to pay union dues as a condition of employment. The First Circuit’s decision is similar, the National Right to Work Legal Defense Foundation (NRLDF) argues, because it ruled definitively that private sector workers cannot be charged for union lobbying, even for lobbying that union bosses argue is “related” to their bargaining activities.

The First Circuit Court of Appeals in Boston ruled in favor of a Warwick, Rhode Island-based nurse Jeanette Geary, in her decade’s-old case against the United Nurses and Allied Professionals (UNAP) union. Geary argued that the union had been violating her First Amendment right by forcing her and her fellow nurses to fund union lobbying as a condition of employment. Geary received free legal assistance from National Right to Work Foundation staff attorneys.

Oral arguments were held before the First Circuit in March; one of the judges on the panel was retired Supreme Court Justice David Souter.

Geary’s victory came after the NRLDF’s 1988 Supreme Court-won case, Communication Workers of America v. Beck, in which the court ruled that employees could not pay for union boss activities unrelated to the union’s bargaining functions. Union officials sought for over a decade to make Geary fund their lobbying activities and lost.

Geary, who worked as a nurse at Kent Hospital in Warwick, first filed an unfair labor practice charge in 2009, alleging that UNAP officials failed to provide her evidence of a legally required independent audit of its breakdown of expenditures. She also challenged the union’s requirement that she and other employees pay for union lobbying activities in violation of the Supreme Court’s Beck decision.

In Beck, the Supreme Court ruled that private sector workers in states without Right to Work protections could only be forced to pay union dues for union activities “directly germane” to the union’s bargaining functions, which excludes political activities like lobbying. In Hudson, another case the NRLDF won, the Supreme Court held that union officials must provide an audited financial breakdown of how forced union dues are spent.

The NLRB had issued a negative decision in 2012, which was invalidated by the Supreme Court’s ruling in NLRB v. Noel Canning. It ruled that the NLRB lacked a valid quorum because of three unconstitutional “recess appointments” that then-President Barack Obama had made. Seven years later, Geary’s case was the only remaining one invalidated by Noel Canning still pending without a decision by the NLRB.

In January 2019, National Right to Work Foundation staff attorneys filed a petition at the U.S. Court of Appeals for the District of Columbia seeking a court order that the NLRB promptly decide Geary’s case. The Appeals Court then ordered the NLRB to respond to that petition by March 4, 2019, which caused the NLRB to issue its decision on March 1, 2019, just days before the deadline.

The NLRB ruled 3 to 1 that union officials do in fact violate workers’ rights when they force nonmembers to fund union lobbying activities. It also ruled that union officials must provide independent verification that the union expenses charged to nonmembers have been audited. Despite this, UNAP bosses requested the First Circuit Court of Appeals overturn the ruling. The court ultimately ruled against them.

“In a long-overdue victory, after over a decade of litigation Ms. Geary has successfully affirmed her right not to fund union boss lobbying, a protection guaranteed by the Foundation-won Beck Supreme Court decision,” NRWF President Mark Mix said. “No worker should be forced to pay for union political activity, including lobbying. But, the fact that Ms. Geary had to endure this drawn out legal fight shows why a National Right to Work Law should be passed allowing every worker the individual right to decide for themselves whether to subsidize any union boss activities, political or not.”