Last night the Louisiana Legislature opened its $1.8 million special session, which is due to last until Oct. 27, with a gaveling-in at six o’clock.

But a half-hour before the gaveling-in of the session, we were treated to a short press conference in which House Speaker Clay Schexnayder and Senate President Page Cortez vigorously demoralized anyone who harbored hopes that they were serious about reopening Louisiana’s economy and ending the colossal Charlie Foxtrot that has been John Bel Edwards’ COVID-19 response.

This is, after all, the worst jobs economy in America while at the same time Louisiana is effectively doing less to halt the spread of the virus than practically any other state in the union. And the constituents of those Republican legislators, who were the beneficiaries of a record $7 million spent to elect what’s supposed to be the most independent, conservative legislature ever sent to the Louisiana State Capitol, have been letting them know they’re tired of Edwards’ oppressive restrictions and mandates.

Instead, what did those constituents get? They got this…

Schexnayder and Cortez don’t even agree on a bill. They have two different bills, both of which are complete and total hot garbage.

Both bills would throw out the current emergency management system, which has flaws but is workable with any degree of political courage on the part of the legislative leadership – all it takes is a petition signed by a majority in either house at any time and an emergency goes away. The petition, assuming there is enough political courage to use it, is more than enough of a stick with which to beat into submission a governor who’s abusing his emergency powers.

Instead, they would do not what Rep. Mark Wright’s HB4 does, which would give the governor 30 days of emergency powers and after that he would have to seek legislative permission to continue them. This would give him 30 days, and then fill the kitchen with cooks from the legislature and create some sort of advisory council mumbo-jumbo to logroll and beard-pull their way through giving the governor whatever he wants.

The advisory council cooks are, per Cortez’ bill…

In other words, it cuts out anybody who’s not a pet of the House Speaker and the Senate President. If you’re not on the favored list, you don’t get to have a seat at the table.

And this cabal of insider sauciers doesn’t even have the power to overturn the governor’s emergency declaration. As one state representative said, “This is a seat at the table, all right – it’s a seat at the kiddie table.”

Anybody who votes for this excrescence ought not just be recalled; they ought to be tarred and feathered and ridden out of Louisiana on a rail.

Cortez’ bill is so bad that it would bring the Chief Justice of the Supreme Court, who is currently the abject clown Bernette Johnson, into the kitchen to sample the gumbo and offer a review. I’m given to understand that stupendously asinine idea came from one Rick Ward, Democrat-turned-Republican Senator from Livonia.

And worse, they would actually make it harder to cancel an abuse of the emergency powers like Edwards is currently foisting on the people of the state. These bills would require a petition to be signed by the majority of BOTH houses, not just one, to overturn an emergency.

You want to talk about Failure Theater, this is the very definition of the term. Making it necessary for both houses to sign off on a cancellation of an emergency declaration means it’s no longer a realistic prospect and would never be tried again. That’s what you’re spending $1.8 million for a special session to get.

Cortez’ bill is such an example of Failure Theater that he’s routing it through a Democrat-chaired committee. It’s scheduled to go through Senate Judiciary B, which is chaired by Democrat Gary Smith, one of only two white Democrats left in the Senate. Jud B has four Republicans (Kirk Talbot, Ronnie Johns, Cameron Henry and Mike Reese) out of seven, but Johns is almost sure to vote that bill out onto the Senate floor.

It should be going through the Senate and Governmental Affairs Committee, which is chaired by Senate Republican Delegation chair Sharon Hewitt. Naturally, the bill got routed away from the conservative-run committee that would either have killed it or amended it into something with some teeth.

But of course, were Hewitt’s committee to get hold of the Cortez bill, what would result would be something Edwards would veto.

This idiocy, as written, he would surely sign. It gives him even MORE power to abuse, because it muddies the waters to such an extent that he would never lose his emergency declaration. This might be the most complete sellout in Louisiana history if it goes forward, and it is most certainly built and set up to go forward.

We’re told that other than bringing the Chief Justice into the equation, Schexnayder’s bill, which at the time of this writing last night hadn’t been filed, is essentially the same. While Cortez’ disaster gets shoved through Jud B today, Schexnayder’s bill is supposed to go through the House Governmental Affairs Committee tomorrow. By Monday, both are supposed to have had floor votes.

Just before the special session was called, Schexnayder and Cortez supposedly met with Edwards. The governor put out statements bitching about the special session and had his media lackeys trash it; that now looks like a smoke screen intended to make this betrayal look like “resistance” to the governor. Were what’s being proposed not so absolutely laughably awful, that might actually have been possible to carry off.

Not after this clown-show, though. The fig leaf is gone, and so is the “independence” Schexnayder promised would be part and parcel of his speakership because he wouldn’t be owned by LABI and the Louisiana Committee for a Conservative Majority who raised and spent the majority of that $7 million to create this so-far overrated legislature.

Nowhere in that press conference was a petition even discussed. Meanwhile, on the House floor this happened… 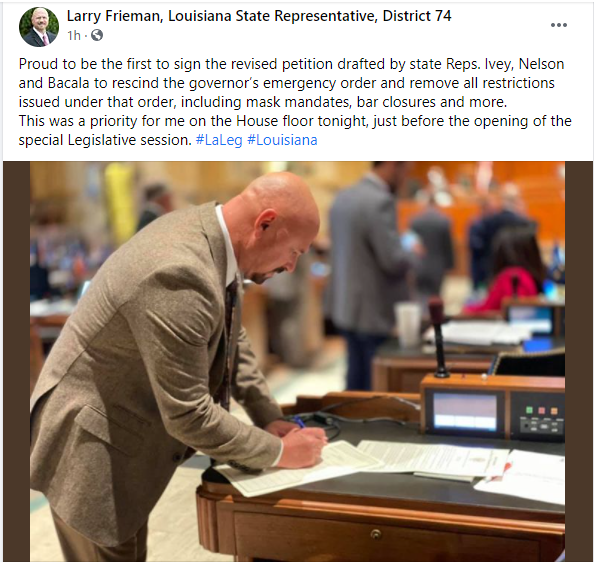 I’m told there were about 35 signatures on the Bacala-Nelson petition in just a couple of hours yesterday. This one is similar to the petition Rep. Alan Seabaugh circulated this summer except for the length of its moratorium on new COVID-19 emergencies. Seabaugh’s petition had a two-month moratorium; this one has two weeks.

Given that in two weeks we’ll know whether reopening the state will create a COVID-19 spike or not, it’s a good time period for that moratorium.

And if there is no spike in the two weeks following this petition being filed, if it gets to 53 signatures, John Bel Edwards’ political career will be deader than Huey Long. That eventuality will mean John Bel Edwards destroyed Louisiana’s economy for no good reason. That recall effort against Edwards, which as we understand is still moving forward despite a lack of organizational cohesion, would become a brushfire engulfing the state.

So when we say Failure Theater, we aren’t painting with the widest brush possible. The idiocy in that building doesn’t extend to the entire legislature, and certainly not to the entire House of Representatives. It is quite possible that sometime tomorrow the Nelson-Bacala petition will get to 53 signatures, and at that point there will have actually been a point to calling a special session.

It ought to be pointed out that three weeks ago today, some 62 members of the House Republican Delegation raised their hands in favor of signing a petition to reopen the state. Schexnayder took that petition and said he needed to “vet” it, and then wasted a week and a half before calling a “leadership” meeting at which the whole delegation expected to be asked to sign a petition, only to hear “trust me” from Schexnayder that he had something better than the petition on the way. And now we have this special session and these Failure Theater bullshit bills making this fiasco even worse.

Those members have been baited and switched. They’ve been abused worse than I’ve ever seen any legislators abused. John Alario was a sleazeball and a crook, but he never took his people for a ride like Schexnayder has just done.

It’s so shady right now that yesterday evening when the Nelson-Bacala petition was getting its 35 signatures, one of Schexnayder’s top lieutenants Stuart Bishop went and signed it – and then came back moments later to take his name off the petition. Whether Bishop was confused or sandbagging, it’s hard to tell. But this kind of crap is what we have now.

There is nothing wrong with legislating Hurricane Laura relief, though the state has no money to provide to the people of western Louisiana. And something certainly must be done about Louisiana’s unemployment insurance fund being insolvent after Edwards bled it of a billion dollars by shutting the economy down. Edwards is now demanding to be able to ransack the balance of a fund set up to provide relief for small businesses his shutdown has destroyed, while State Treasurer John Schroder is screaming that the fund’s money is already accounted for.

State Treasurer John Schroder says nearly all of the funding in the Louisiana Main Street Recovery Program has been obligated and many applicants won’t receive a grant if the money is diverted to other initiatives.

‘Main Street’ offers small businesses grants of up to $15,000 to pay for their COVID-19 expenses. Gov. John Bel Edwards has asked state lawmakers to move $175 million from the $275 million program to replenish the fund that pays unemployment benefits, help local governments affected by the pandemic and assist businesses that have remained closed, such as bars.

But Schroder said Friday the diversion of funds “would be catastrophic to thousands of small businesses across this state.” Around 37,000 have applied for a grant, and Schroder said his office will soon stop taking applications because all of the money will be obligated. The initial application deadline was Nov. 4.

There are 7,210 applications that have been awarded or paid through Sept. 25, according to LouisianaMainStreet.com.

“We’re not even at the halfway mark for this program,” he said in a statement. “The average grant is $11,500. For our small businesses, that’s a lot of money. It’s the difference between closing down or keeping their doors open.”

The Legislature absolutely should do something to ward off the massive tax increases Edwards’ draining of the unemployment insurance fund would bring on. A special session is appropriate for that.

But that problem would largely go away on its own, or at least begin to abate enough to make solving it a lot more possible, were the state’s economy to reopen.

Are you aware that the Atlanta Fed is predicting the national economy will grow by more than 30 percent in the third quarter? If Louisiana is much above zero it will be a surprise. We have been left in the dust by our neighbors, and particularly Texas and Florida. Florida especially is poised to drain away what’s left of Louisiana’s economy now that Gov. Ron DeSantis has fully reopened the Sunshine State for business.

The most notable piece to all of this is how simple it really is. All these guys have to do is to get 53 House members’ names on a petition, and go and open up the state’s economy. Once that’s been done, they’re in a special session and the governor’s teeth have been removed. He’ll have no choice but to negotiate.

So far the failure of the legislative leadership to get out of their own way has obscured that fact. It’s time for that to no longer be the case. Because if this special session ends without Louisiana being reopened for business, the voters will and should never forgive those who had the chance to set us free and refused.