…because it appears to have played a major role in the debacle that was Schexnayder’s “leadership meeting” at the Capitol yesterday at which a very large majority of Republican state representatives showed up expecting to be asked to sign a petition that would cancel Gov. John Bel Edwards’ emergency declaration and reopen Louisiana’s economy (subject to whatever local shutdowns would still be in force).

Those House members showed up with pens ready for signing, and were instead told that there’s a “plan” for reopening the state, and that the details of the “plan” were forthcoming – they’d be briefed on them over the weekend, and on Monday the “plan” would be announced to the public.

A pair of state senators, Senate President Paige Cortez and Sen. Bodi White, who chairs the Senate Finance Committee, were at the meeting, and the message they imparted was that the House members should “trust your Speaker.” It should be recognized that no effort whatsoever has been made to further a petition to reopen the state in the Senate, despite the fact that to make such a petition legally effective through the Senate requires only 20 signatures rather than the 53 in the House.

We were told by two attendees at the meeting that the presence of Cortez and White rankled given the Senate’s inaction while the House has been under the gun over the petition issue. Nobody in the House particularly cares what Cortez has to say given his having sat out the fight to reopen the state almost completely.

The fact that those House members will now be hammered by constituents angry at yet another delay in the body doing something to reopen the state was not lost on any we talked to Thursday night. Several expressed exasperation at spending an entire weekend getting bombarded with angry calls and messages accusing them of cowardice and indifference to failing businesses and the loss of individual freedom when they expected to put pen to paper and take an effective stand on Thursday.

Now it’s Monday before the “plan” is announced. Four days of suspense while their constituents boil over.

And what is the “plan?” With this kind of buildup, you’d expect it to be some kind of shock-and-awe exposition.

From what we’re hearing, not really. The “plan” is to call a special session and change state law to limit the governor’s emergency powers.

There is nothing wrong with the idea of a special session. One should have been called by now. Louisiana’s economy is down the tubes and the state is staring a massive budget deficit in the face. Worse, Louisiana’s unemployment insurance fund is insolvent and the state is now borrowing money at a frightening clip from the federal government, which by law is going to require a colossal tax increase on our businesses which are already in dire straits to service that debt. The level of crisis these economic shutdowns have put Louisiana into completely calls for a special session, and one of the key issues which must be dealt with is to insure no governor is ever able to drag Louisiana through six months of hell as Edwards has done ever again.

But the logistics of a special session to end Edwards’ shutdown aren’t all that palatable. Anybody who thinks that’s an answer to this problem isn’t paying much attention.

First of all, at this point you’re looking at mid-October before a special session would begin. Call it on Monday and it’s going to take at least three weeks to get the bills written. And any conventional legislative calendar would require a minimum of two weeks to pass anything, so it’s Halloween before any bill that would limit gubernatorial emergencies would go to Edwards’ desk.

Which he’ll veto absent some sort of leverage imposed on him.

The Legislature had that for its chief triumph of 2020; namely, tort reform. The House and Senate had the votes to pass resolutions suspending then-current tort law for a year, resolutions which by law couldn’t be vetoed. Perhaps there could be suspensive resolutions made ready and credible threats given to Edwards as consequences for his vetoing “emergency reform” bills. It’s not implausible those could be injected into the process.

But the idea everybody is talking about is to limit the governor to 30 days of an emergency declaration’s effect, after which he has to seek the approval of the legislature to continue it.

We love that bill. But let’s say everything goes just right, you pass it by the end of October and Edwards is induced, some sort of way, into signing it.

That would mean Louisiana doesn’t get out of Phase 3 until after Thanksgiving?

But this was Schexnayder’s comment Thursday night, which just makes things worse… 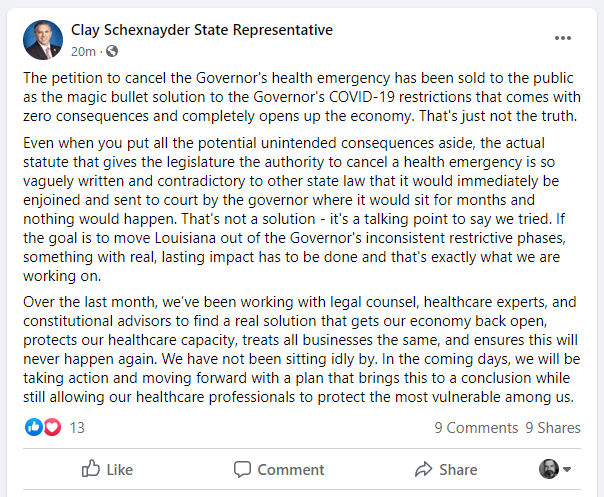 First, there’s a growing perception that Schexnayder is bought and paid for by the hospitals. Notice how many references he makes to them in that short statement. He’s certainly not dispelling that notion, is he?

And second, exactly what is it that he gains by taking a petition off the table? The petition is the thing which scares Edwards the most. Having it in the arsenal as that nuclear option is the leverage to negotiate a better Phase 3. Here he repudiates that nuclear option when the majority of the people in his delegation want to give it to him. Only one word describes this: stupid.

Whoever is advising Clay Schexnayder obviously hasn’t paid enough attention to what’s going on with the constituents of those House members. Pitch to those constituents that they’ll have to wait until Black Friday in order to live their lives normally, and it won’t just be John Bel Edwards they’re going to want to recall. Probably starting back home in the Speaker’s district.

Schexnayder had better have something else up his sleeve besides this special session idea. Regardless of what he posted on Facebook Thursday night, he’d better have a petition to reopen the state ready on Monday. And of course, anything he would have for the legislators Monday, he’s already missed the opportunity to offer on Thursday, when they were all present and ready to sign. Presenting one Monday only has the effect of unnecessarily subjecting them to constituent pressure.

And let’s remember that 10 days ago, the House members showed up at a meeting of the GOP delegation and almost unanimously said they were willing to sign the petition Rep. Mark Wright presented. Schexnayder took that petition and said he needed to “vet” it for 24 hours. Then it was 48 hours. Then it was a week and a half.

Even if he presents it on Monday he’s then one day short of two weeks dragging his members through the political mud with phone calls and messages which have gotten more and more forceful and angry. That isn’t leadership; it’s idiocy.

Which is why he won’t have a “vetted” petition to offer them and he’s saying a petition is no good. He’ll have nothing immediate to keep the wolves off their door, after having promised he would. Shining on, or baiting and switching, your fellow legislators is not something you can do forever.

Another story we heard was that Schexnayder and Cortez had asked the governor for a meeting this afternoon. If that’s true, one has to wonder why on earth they would show up to the meeting empty-handed. What offer or threat could they possibly bring to the governor to induce him to lift his restrictions without a petition signed by the majority of the House or Senate?

There’s no leverage in that scenario at all. It fails basic political negotiation. Again, absolutely horrendous advice is being listened to. And if the timeline we presented above, which minus a petition is optimistic, is correct then the functional effect of what Schexnayder has done is to buy John Bel Edwards two extra months of shutdowns.

Whether on purpose or not, it really doesn’t matter.

At this point we’re done listening to optimism about what positive role the legislature can play in opening Louisiana back up. We’ll wait to see what the “plan” is on Monday, but if it’s what we think it is we’ll be a lot more interested in who the House chooses as its replacement for the current failed Speaker.

Because the one thing we can see a consensus building on will be that Schexnayder has got to go. And as the pressure builds, the easiest thing for those House members to do will be to tell those angry constituents that he’s the problem. After that Facebook post Thursday, the pissed-off voters will likely agree.