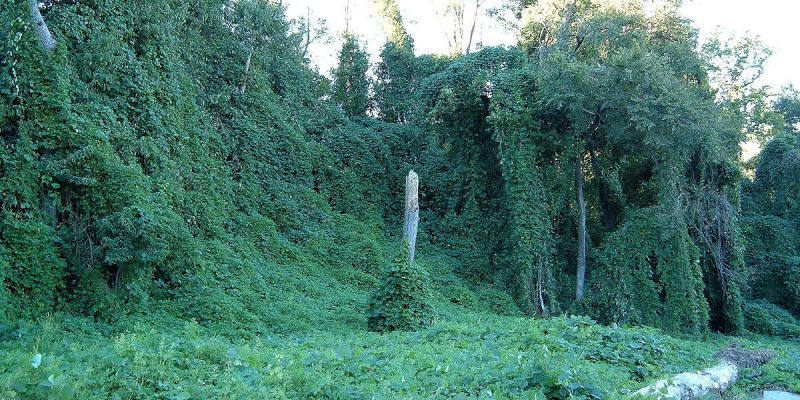 How many Americans know what Kudzu is? Not many I assume, but the story of Kudzu is the perfect metaphor for those who want to understand the enveloping arms of modern socialism.

Kudzu is a slow growing vine sporting attractive yellow flowers. First imported for gardens and fodder for cattle, it was later used by the Federal government as ground cover to control the dust storms of the 1930s.

No one really paid much attention, it all seemed innocuous enough, a slow growing vine, beautiful flowers, what could be bad about that? But then by the middle of the 20th century people realized that Kudzu had spread widely, killing entire forests with its densely spreading tentacles. Once people awoke to the danger it was too late. Kudzu is almost impossible to eradicate and it has literally consumed everything in its path.

The slow creep of socialism overtaking the Democratic Party is akin to the spread of Kudzu. Not too long ago all politicians ran away from any mention of socialism and from any policies that could be construed as a vestige of socialism. After all, for decades starting with the Second World War, the United States had fought and defeated socialist states that sought to destroy our democracy. By the late 20th century, the collapse of the zenith of socialism, the Soviet Union, left no doubt as to the superiority of the American way, personal freedom and a capitalist economic system. Expectations were that the perils of socialism had finally been relegated to the ash can of history and that mankind was far better off for it.

But by the early 21st century a new generation of Americans, not understanding the tragedies of its history, were attracted to the bright yellow flower of socialism. Suddenly long dormant socialist politicians found renewed life by demonizing the American way and convincing a confused people to follow them to a new socialist Nirvana.

The first step of this current revival was when Barack Obama planted the seeds of nationalized medicine into the American landscape. To overcome deep skepticism, he appealed to Americans’ innate instinct of fairness by subtly adopting the philosophy of Marx, “From each according to their ability, to each according to their needs.”

Not unlike the beautiful yellow Kudzu blooms, his words lulled many Americans into complacency that Obamacare was not socialism by another name. And his tactic to convince people of the fairness of his strategy, subterfuge. Remember his words, “You can keep your doctor,” “Your family will save $2,500 a year,” “You can keep your private insurance or choose from several plans on his exchanges.” None of that was true, but it worked for he and his followers as a carefully executed justification for the first steps of easing America into nationalized healthcare.

And now with the 2020 election has come the next step in the strategy to dupe America into acceptance of fully socialized healthcare. To accomplish this the socialist core of the Democratic Party’s plan is to build on the imperfect Obamacare foundation to overwhelm and destroy what is left of the most successful healthcare system in history.

Democratic politicians have openly left the closet that was America’s condemnation of socialism. In a major shift from but a few years ago they freely admit their desire to replace free market, insurance-based healthcare coverage with Medicaid for all, in truth socialized medicine. But to make himself appear acceptable to vast majority of Americans who are moderate, Joe Biden has adopted Obama’s strategy of subterfuge. He asserts that he does not adhere to the Sanders/AOC plan for healthcare, instead he has a different plan. His plan, something he calls “Bidencare,” claims that the 180 million American families who have private insurance can, if  they choose, keep their insurance or if they want to, they want they can receive free healthcare from the government.

The danger for naïve Americans who want to trust him is verbalized best in that old expression, “fool me once shame on you, fool me twice shame on me.” In what could be one of the most glaring deceptions of American political history Biden has assumed that Americans will not comprehend that private insurers have no chance to survive when they are forced to compete with free, government-paid insurance. Cynically he must know that such competition will drive all private insurers to vanish, forcing everyone onto the socialized healthcare system that the core of the Democratic Party desperately wants. If Americans fall for his deception, they will be throwing themselves into the open arms of the neo-Marxist future leaders of America.

Bidencare, just like Kudzu, would within a short time squeeze the life from all private insurers and leave the American people with no options except socialized healthcare. And if Americans are as complacent about Bidencare and the socialist policies that will follow as their parents and grandparents were about Kudzu, they may wake up one day to find that the America they have known is a thing of history, modern socialist history.

Interested in more national news? We've got you covered! See More National News
Previous Article Who needs contact tracing when police can legally track your license plate number and store your whereabouts for up to one year?
Next Article Amazon expanding throughout Texas, new fulfillment center in Waco is latest endeavor