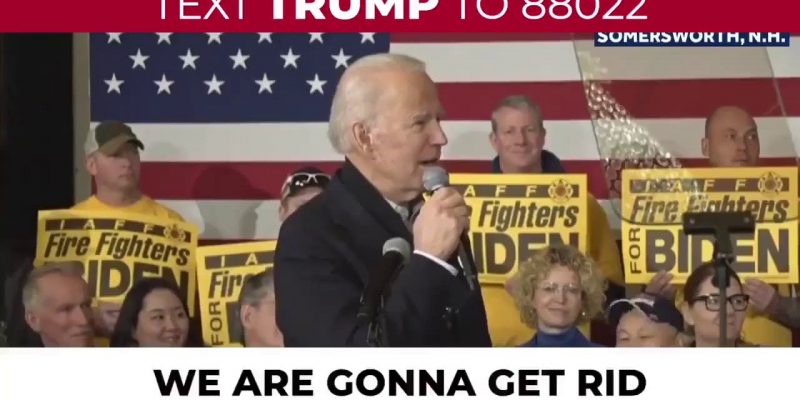 Both Republicans and Democrats are pushing back on comments Democratic presidential candidate Joe Biden made about “transitioning away” from the oil industry.

At the presidential debate Thursday night, Biden said, “I would transition away from the oil industry, yes. The oil industry pollutes, significantly. It has to be replaced by renewable energy over time.”

Texas Gov. Greg Abbott, a Republican, replied, tweeting, “Biden wants to ‘transition’ away from the oil industry. He just killed paycheck[s] earned by hardworking families in Texas. Joe just wants to transition away from Texas. Remember that on election day.”

While Texas’ governor pushed back against Biden’s comments, New Mexico Gov. Michelle Lujan Grisham seems to embrace them. New Mexico, the third largest oil-producing state in the U.S., accounts for more than 30 percent of onshore natural gas production in the U.S. and nearly 60 percent of all onshore oil production.

But Lujan Grisham, for at least the second time during the campaign, plans to join an event Thursday being held by “Clean Energy for Biden.”

“Joe Biden told the world he wants to get rid of the oil industry and it’s abhorrent that our own Governor agrees,” Larry Behrens, Western States Director for Power The Future, said in a Wednesday statement. “Governor Lujan Grisham has delivered massively high unemployment along with the fewest energy jobs in a decade, so it’s clear why she is working so hard to get a new job. She simply doesn’t want to have to look New Mexico’s energy workers in the eye and be accountable.”

Transitioning away from oil and gas “would absolutely destroy New Mexico’s economy and kill thousands of middle-class jobs in our state,” Behrens told The Center Square.

New Mexico Democrat Congresswoman Xochitl Torres Small, whose district is heavily dependent on the oil and gas industry for jobs, said she disagreed with Biden’s plan. She tweeted, “Energy is part of the backbone of New Mexico’s economy. We need to work together to promote responsible energy production and stop climate change, not demonize a single industry.”

The U.S. leads the world in crude export, with Texas, New Mexico and Louisiana leading the way.

Texas is the largest producer of crude oil and natural gas in the U.S. According to the U.S. Energy Information Administration (EIA), Texas produced 41 percent of U.S. crude oil alone last year.

“Texans know that the oil and natural gas industry anchors our economy and directly funds our roads, schools, emergency services and our Rainy Day Fund,” the Texas Oil and Gas Association tweeted. “In fact, 86% of Texas voters believe oil and natural gas provides a value to their life.”

Texas Democratic Party spokesperson Abhi Rahman said in response that “Texas energy has failed under Donald Trump. Greg Abbott should be more focused on his own record on unemployment.”

But under the Trump administration, the EIA reports that the U.S. was the world’s largest oil producer, and in July 2019, the U.S. was projected to become a net exporter of crude oil and petroleum products in the fourth quarter of 2020.

“The United States has been a net energy importer since 1953, but continued growth in petroleum and natural gas exports results in the United States becoming a net energy exporter by 2020 in all cases,” according to the EIA’s Energy Outlook 2019 report, thanks to continuously growing shale production from the Permian Basin in Texas and New Mexico.

Biden’s plan to ban fracking would cost Texas 3.2 million jobs and a loss of $1.5 trillion to its GDP, according to a study published by the U.S. Chamber of Commerce’s Global Energy Institute earlier this year,

“Increased oil and gas production driven by hydraulic fracturing has been fueling America’s sustained period of growth over the past decade, while making us both cleaner and stronger,” Marty Durbin, president of the U.S. Chamber’s Global Energy Institute, told WorldOil.com. “Our study shows that banning fracking would have a catastrophic effect on our economy, inducing the equivalent of a major recession and raising the cost of living for everyone across the country. This bad idea should be abandoned.”

Nationally, oil and natural gas provide more than two-thirds of the energy Americans consume daily, according to the U.S. Energy Department.

Interested in more news from Texas? We've got you covered! See More Texas News
Previous Article Half of 10 U.S. cities in worst financial distress during state shutdowns are in Texas
Next Article Biden Family Exposed In Bombshell Bobulinski Interview