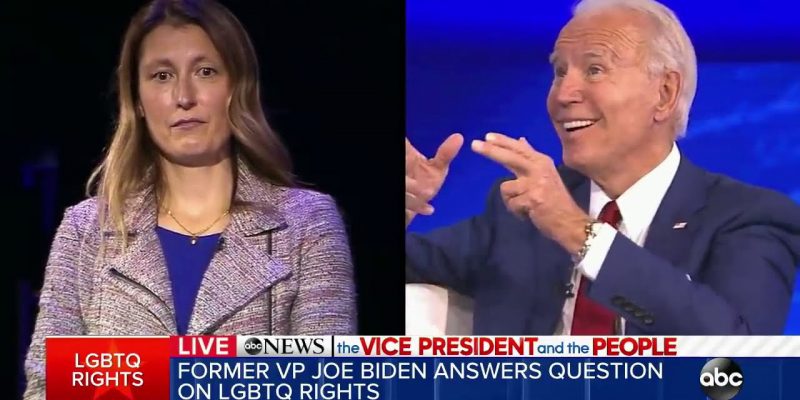 At a town hall forum televised on ABC this week, former Vice President Joe Biden offered his support for eight-year-old children to undergo gender transition. Responding to a question from a mother of a transgender child, Biden said, “The idea that an eight year-old child or a ten year-old child decides, ‘you know I decided, I want to be transgender, that’s what I think I’d like to be, it’d make my life a lot easier.’ There should be zero discrimination.”

No American should of any sexual orientation should face discrimination, but the position that an eight-year-old child should undergo gender transition is, to put it mildly, very controversial. An adult should be free to make any decision regarding their sexuality, but children need to be protected. In the view of Peter Sprigg, Senior Fellow for Policy Studies at Family Research Council Action, “The implementation of invasive physiological gender transition procedures—puberty blockers, cross-sex hormones, and/or gender reassignment surgery—upon minors raises grave concerns.”

Biden also said he would “eliminate” the Trump administration’s executive orders on transgender issues. The most controversial decision involved banning gender transition in the military. Other orders rescinded several Obama era rules, such as forcing doctors to perform gender transition despite their objections or requiring single sex homeless shelters to admit people based on their preferred gender instead of their biological sex. According to Biden, “I will flat out change the law.”

If Biden is elected, those who believe in the essential differences between men and women will have limited to no influence on his administration. Across all the social issues, a President Biden will pursue a very progressive agenda.

Understandably, millions of Americans who support traditional values are worried and depressed.  They see riots, a breakdown of law and order, and a general weakening of the value system that built America.

It is true that we have undergone a terrible period over the last few months; however, there is still a way for traditional values to make a strong comeback.

Of course, the first requirement is for President Trump to be re-elected. This is crucial, for if Biden becomes President, the left will gain a tremendous amount of brand-new power both cultural and political. In fact, they will become so powerful that they might be able to destroy traditional America completely and prevent any sort of revival.

Biden and his liberal allies will pack the Supreme Court with more progressive justices in the mold of Ruth Bader Ginsburg.  They will add Puerto Rico and Washington D.C. as new states to guarantee 4 new democratic U.S. Senators.  They will turn the economy in a more socialist direction and shift more and more power away from the people and toward the government.

Traditional America might not be able to recover from these blows, so it is imperative that President Trump win re-election. If that can be accomplished, and the U.S. Senate stays in Republican control and the GOP also gains some seats in the House, there will be a formidable political base to fight the left, which is powerfully embedded in government, the media and in special interest groups.

A Trump victory will give Republicans additional time to watch as the old Democratic party eventually implodes. In short order, the Democratic Party will be taken over, totally and completely, by the ultra-radical left.  Younger super-progressive Democrats like Congresswoman Alexandria Ocasio Cortez (D-NY), Stacey Abrams and Beto O’Rourke will assume full control. They will create a socialist Democratic Party, which will be a tremendous boost to the Republicans.

As the new far-left Democratic Party is revealed, millions of voters will be appalled and flock to the GOP. Their new party will be too radical for most American voters, who tend to be conservative or moderate. Our country is center-right, not filled with socialists who want to abandon their gasoline-powered vehicles.

This socialist agenda, including the end of fossil fuels, gun control and other radical policies will become the actual face of the new Democratic Party. The old mask will be removed. The current Democratic Party, which successfully pretends that it is centrist or only slightly liberal, will be gone.

The American people will then be able to clearly see the new Democratic party for the first time. Finally, voters will be able to understand that the Democratic Party hates traditional America.

These ultra-left Democrats hate the Founding Fathers, the Bible, the Second Amendment. They also hate free markets and free speech, and in fact, they hate Western Civilization and everyone who represents it.

These are all the reasons why they hate President Trump so much. To them, he represents traditional America.  He is a white alpha male who is heterosexual and confident.  President Trump supports free markets, free speech, and limited government.  He is opposed to identity politics, and, unlike so many previous Republican politicians, he fights back.

President Trump represents everything the far left detests and wants to destroy. While millions of American already understand this situation, there are still too many people who are unclear about this political battle.

Fortunately, they will soon understand the truth. Once they realize the stakes involved, the GOP will gain millions of new allies and large amounts of political power.

We can use that power to protect traditional values from attack and start our long overdue counter-offensive.  We can fight back, regain our culture and win, but it all starts with the re-election of President Donald Trump.

Interested in more national news? We've got you covered! See More National News
Previous Article Here’s How the Covid Drama Really Went Down with Biden Early This Year
Next Article ALEXANDER: Social Media Censorship Is Stunning In A Free Society