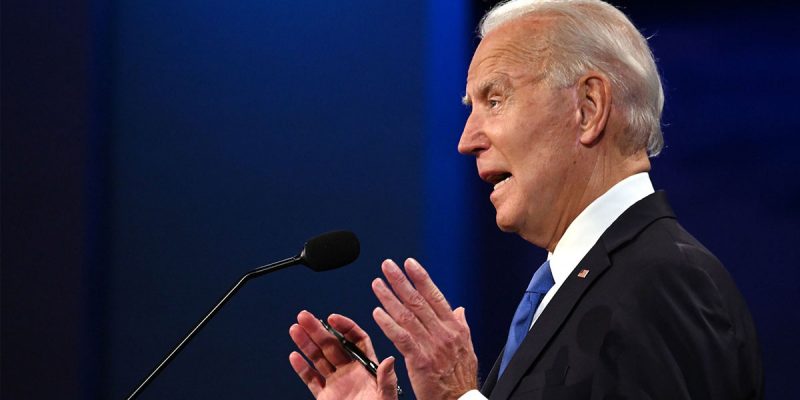 For most of the last month, almost everything about the preparations for last night’s presidential debate seemed carefully orchestrated to favor Joe Biden. Consider the choice of moderator, Kristen Welker, an NBC correspondent and co-anchor from a family of prominent Democrat donors. Consider the biased choice of topics to be debated (Coronavirus, healthcare, immigration, climate change), and the conspicuous absence of critically important topics left off the debate list (the economy, foreign policy, geopolitics). Even the debate format itself, with its punitive mute button, was obviously a swipe at you-know-who.

Throughout the last several weeks the mysterious workings of the Presidential Debate Commission all seemed to converge in the direction of one singular project, namely, the construction of a missile aimed squarely at Donald J. Trump. That missile was duly launched at 8PM Central Daylight Time last night. It missed the President but struck Joe Biden squarely in the mouth. We suspect that Mr. Biden was more deeply wounded than the talking heads allowed. Here’s why:

1) The President was finally able to broadcast his message to the public about the extensive cloud of corruption which has surrounded the Biden family for decades. The news media always did suppress stories hostile to left-wing interests, but the media has now reached the point of no return by ignoring a major scandal likely to have an impact on this election. The President deftly turned the debate to the Biden family’s corrupt dealings and kept the heat on for the rest of the evening. Joe Biden could only respond with a rictus laugh and accusations that it was all more Russian collusion. (One would think the Democrats would want to forget about Russian collusion just now.)

2) The President caught out Joe Biden in an outright lie about banning oil and gas, especially fracking. Joe at first denied the accusation but then went off script for several seconds and actually confirmed that he really was on the warpath against the nation’s oil and gas industry. This was perhaps the most important debate segment of the night, and may well cost the Democrats any chance at taking Pennsylvania, or any other major oil and gas producing state.

3) Throughout the debate Joe Biden simply looked less forceful and less energetic than President Trump. He sometimes had trouble expressing himself and often minced his words. The two men presented not only a stark cultural and political contrast, but also a physical one.

Donald Trump was obviously the only man on stage last night who demonstrated the strength, stamina, and mental acuity to be the President of the United States of America. He ducked the missile that NBC and the Presidential Debate Commission fired at him; Joe Biden never saw it coming. You can bet that world leaders, both friend and foe, took note.