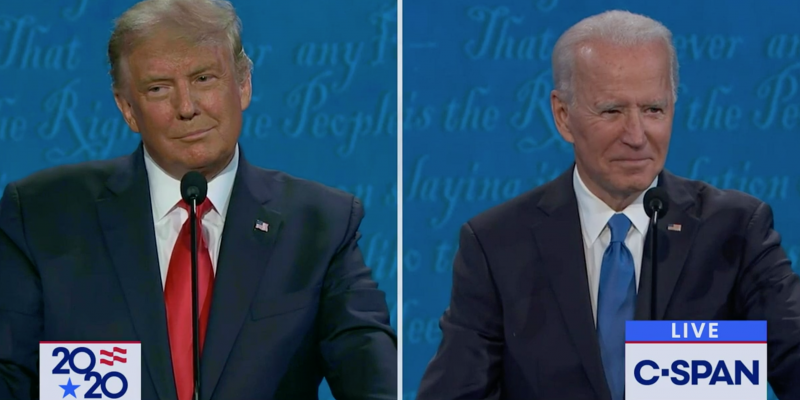 President Donald Trump came out of the final debate as the clear winner as he appeared more composed, focused, and articulate than he did in the first debate just before falling ill to COVID-19.

Conversely, Joe Biden was unable to capitalize on his uninterrupted 2-minute answers to moderator Kirsten Welker’s questions who surprised many by delivering a largely fair debate.

According to Nielsen TV ratings’ preliminary estimate, more than 55 million people tuned in for the final showdown between the presidential contenders which was about 10% less than did for the first debate.

There were a few big takeaways from the night including President Trump’s hammering of Joe Biden over the much-discussed scandal surrounding his son Hunter’s laptop and the duo’s questionable conduct by apparently combining official U.S. foreign policy with business deals.

Secondly, the president was able to deliver a somewhat devastating blow to the Biden campaign by getting his opponent to admit to wanting to “phase out” fossil fuels thus confessing his plan to destroy oil-related jobs which could help Trump win in oil-friendly swing states.

Lastly, the two candidates had a spirited debate over Biden’s official position on fracking which President Trump alleged he publicly opposed, a charge Biden denied. The President insisted that “you’re on tape” and Biden replied saying, “I dare you to prove it.”

Prove it he did, right after the debate, as the Trump campaign promptly released a campaign ad proving the president was correct in his assertion. The video features the former Vice President saying repeatedly during the Democrat primary that he opposed fracking.

The clear misstep by the Democrat nominee is further evidence of his questionable mental integrity and should serve to call into question his other recent statements as his memory seems to be compromised, or he is not being honest.

Trump supporters are celebrating the victory as a helping hand in delivering electoral victories in the oil-rich battleground states of Pennsylvania, Ohio, and Colorado.