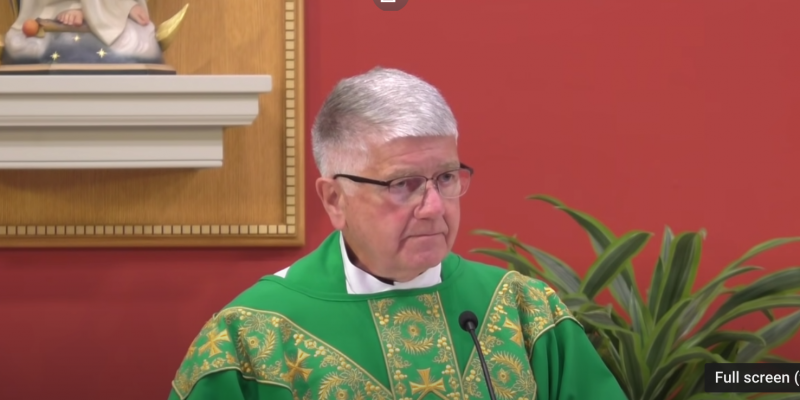 In Fr. Edward Meeks’ recent homily given to parishioners at Christ the King parish in Towson, Maryland, he argues that there is one presidential candidate who stands in opposition to Roman Catholic teachings and the teachings of the Bible: former Vice President Joe Biden, in addition to the entire Democratic Party.

“It is not my job to tell you how you must vote. We do, after all, still live in a free country with free elections at least for the time being. But is is my place as your priest and pastor to help you see how your vote may or may not line up with the teachings of the church.”

He also said that his comments serve as no endorsement for any candidate on behalf of the church or any Roman Catholic denomination, clarifying, “I’m taking this opportunity to speak with you personally,” sharing his personal view shaped by the teachings of the Bible and the church.

His first allegiance, he says, is to the truth of God and his church, adding, “What I’m going to say is not politically motivated because the stakes involve far transcend politics.”

He added that in giving his homily he was careful not to contribute to the division in today’s society but could not remain silent in light of the violence and vitriol playing out in American streets and throughout social media. He said,

“It is time for faithful Catholics and other Christians to stand up courageously and forthrightly to confront the evil that has overtaken our culture and say enough is enough.”

But 2,000 years of Christian principles should instead inform our decisions, he adds, specifically on certain issues that no Catholics can disagree: the sanctity of life, sanctity of marriage, and religious liberty. All three are foundational to our way of life, he maintains.

He also points to a 2012 constitution Pope Benedict wrote, which defined non-negotiable values. The three most imperative are the sanctity of life from conception to natural death, the sanctity of marriage of a lifelong union between a man and a woman, and the importance of preserving religious liberty.

He also quoted a principle from the Second Vatican Council’s pastoral constitution on the modern church, which states,

“At all time and in all places the church should have the true freedom to teach the faith, to proclaim its teaching about society, to carry out its task among men without hinderance and to pass moral judgements even in matters relating to politics whenever the fundamental right of man or the salvation of souls requires it.”

In light of these and centuries of Catholic teachings, Meeks says, there is one presidential candidate who has historically stood in opposition to them: former Vice President Joe Biden and the Democratic Party. He then listed and expounded on five issues “every Catholic needs to know about ‘Catholic’ Joe Biden,” which do not line up with Roman Catholic teachings.